FRP Crowns Champions This Past Weekend 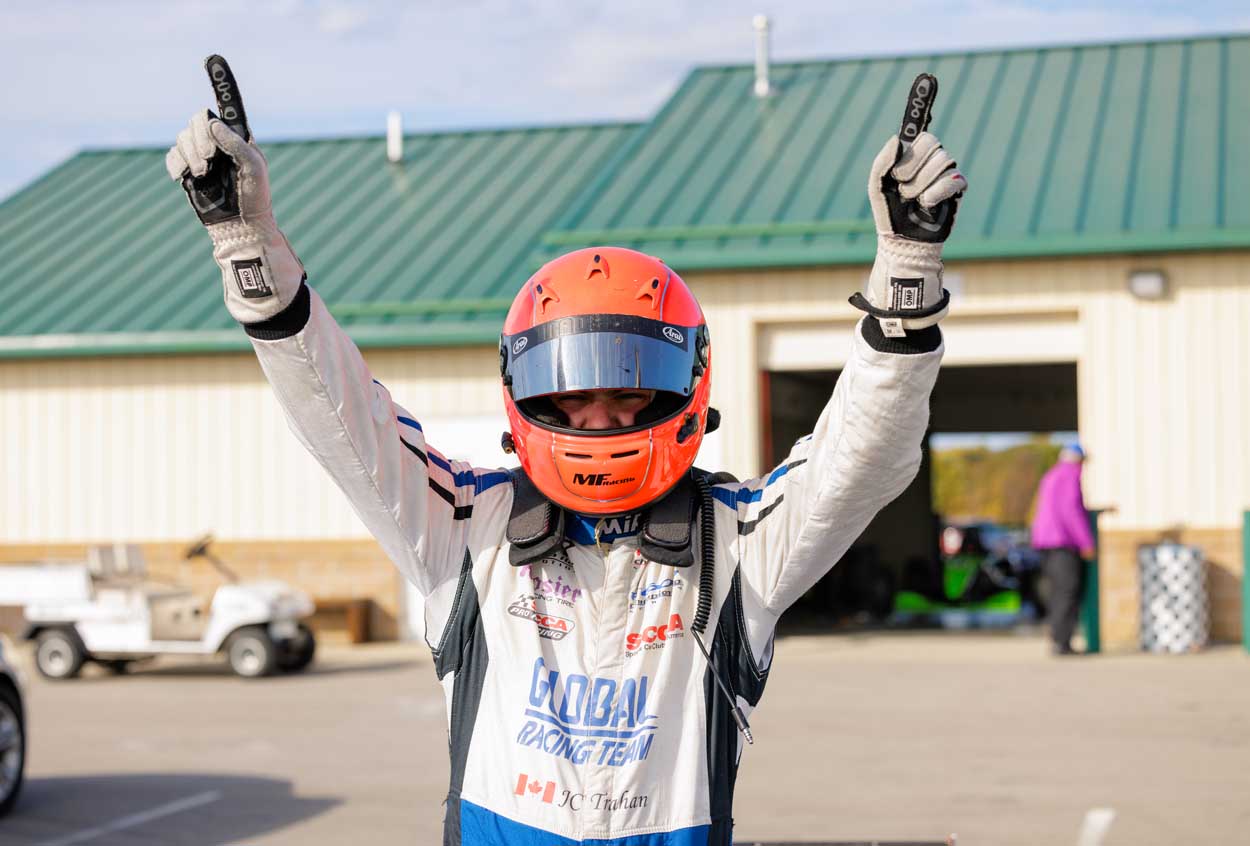 The final round of the 2022 Formula Race Promotions program is now in the books, and series champions have been crowned. With the final checkered flag of the season waving at the Pittsburgh International Race Complex, it was another great weekend of competition as FRP closed 2022 on a high and has built the momentum for a very successful 2023 campaign.

“What a great way to finish the season as we shift our focus towards 2023,” explained Bob Wright. “We had new drivers this past weekend and new entries in a couple of different series which bodes well for our future growth. We have announced our 2023 schedule and renewed contracts for next season so we are hoping we can continue with the momentum we have and continue to provide the most economical, yet competitive race program in the country.” Wright added, “Congratulations to all our series champions, race winners, podium winners, and all who made 2022 a success. Thank you and see you in 2023!”

Thomas Schrage flew back from England where he is representing our country as a Team USA Scholarship winner to dominate the 16-lap affair to win by an unfamiliar gap of 11 seconds. The battle behind him was an intense one and was led at the checkered flag by Team Pelfrey’s Hugh Esterson by a scant .087 over teammate Nolan Allaer to put a pair of Team Pelfrey drivers on the podium in second and third. Fourth on track and the F1600 Master victor was Robert Perona as second through fourth were less than three-tenths from one another when they crossed the finish line. Jonathan Lee finished fifth on track, but fourth in class just ahead of Theodore Burns in fifth. With Perona taking the Master’s win, it would be Rubenzer and Reid who celebrated with him on the podium in second and third respectively.

Race one winner Thomas Schrage started from the pole position alongside Nolan Allaer as Master’s driver Robert Perona slotted into the third position scoring the third fastest lap of the first wheel-to-wheel action. Ayrton Houk and Tim Steele would begin their quest for the race two win from fourth and fifth respectively. When the green flag flew it was all Schrage and Rice Race Prep yet again, this time scoring the win by more than 15 seconds. Hugh Esterson won the battle behind Schrage as he earned the second step on the podium just .209 ahead of Allaer as the top three from race two were the same drivers from race one. Ayrton Houk put a trio of Team Pelfrey’s behind the Rice Race Prep driver as he slotted in fourth, ahead of Chris Horan who had a solid drive to fifth.

Again scoring the pole position for race three based on the race two fastest race lap, Schrage began his assault for a perfect weekend from the inside of the front row. Completing 14 laps and scoring the fastest lap of the race, Schrage had a clean sweep weekend, earning his third victory on top of three pole positions and three fast-lap honors. Allaer and Esterson swapped positions this race with Allaer getting the best of the duo pushing Esterson down to third.  Houk made his presence felt in the top-five all weekend long and finished his 2022 campaign with a P4 result ahead of Jonathan Lee in fifth.

After scoring the race one pole position earlier in the day, Global Racing Team driver JC Trahan was passed by Austin Hill on a well-executed outside pass in turn one on the green flag lap. JC returned the favor on lap eight and claimed the checkered flag, and the fastest lap in the 17-lap F2000 race, taking the honor by 3.337 over Hill. Glenn Cordova joined the front duo on the podium as he maintained his starting position to finish third, and Robert Wright was able to level up one spot from his starting position to finish fourth, just ahead of Andrew Gamble in the fifth position. All drivers exclaimed that this was possibly the best race of the season.

In a race that was punctuated with multiple spins and retirements, it was Trahan who swept the weekend adding his second win in as many days as well as a pair of pole position efforts. After having a fuel pick-up issue in qualifying that resulted in no qualifying time, Glenn Cordova elevated himself in the running order in race two to stand on the podium in the second position ahead of Robert Wright, who also gained a position in the second wheel-to-wheel race to finish third.  JT Novosielski recovered from a spin early in the race to cross the line fourth, just ahead of Austin Hill in fifth, who also had an off-track on the first turn of the first lap.

Enjoying unfettered competition for both races of the weekend, Austin Hill dominantly cinched the season Championship. Having competed all season in both the Atlantic and F2000 classes, Austin continually showed his skill and perseverance. FRP wishes him, and all of our graduating drivers from all classes, great success in their future endeavors!

Running a faster lap than he did in qualifying, pole position winner Garrett Dettman took a dominating win by more than 17 seconds in the first RCFFS race of the weekend. Thomas Schweitz was able to move from P5 on the grid to finish second ahead of perennial front-runner Phil Kingham. It was a pair of Kinghams in the top-five with Mark crossing the stripe in the fourth position as Wayne Nicolette moved forward to finish fifth.

Despite finishing third in race one, Kingham scored the fastest lap of the race and began the second wheel-to-wheel action of the weekend from the pole position. Round one victor Garrett Dettman lined up alongside on the front row while Thomas Schweitz rolled off third overall. In the end, it was Dettman who doubled up on the weekend victories capitalizing from his outside front-row starting position, disposing of Phil Kingham to take his second win of the weekend, this one by more than five seconds. Phil Kingham was able to hang on for second, just ahead of Mark Kingham in third. Derek Holmes narrowly missed his chance to stand on the podium crossing the stripe in fourth as Wayne Nicolette would come home fifth.

Race three saw Dettman and Kingham once again on the front row, this time Dettman starting from the pole position, and he never looked back. Earning the fastest lap of the race, Dettman swept the weekend adding the race three victory to his pole position and two earlier weekend race wins. The Kingham duo of Phil and Mark crossed the line second and third to continue their podium streak while Nicolette added another top finish crossing the stripe in fourth. Steve Roux finished his 2022 season with a P5 effort despite having the third-fastest lap of the race.

Just as it was in qualifying, the Seim duo for Matthew and Doug continued their class domination by taking the top two positions. Matthew got the best of Doug adding a victory to his pole position as the pair were separated by only .001 in fastest race laps and by .081 on the results sheets. Robert Clark held on for the third and final step on the podium ahead of Preston Taylor. Working his way forward after qualifying, Ed Womer made his first appearance in the top-five in race one with a fifth-place result.

Seim overcame his second-place qualifying effort to top the podium in race two and earn his second victory of the weekend. The Seims once again put a pair of drivers on the podium in the top two positions while Preston Taylor was third in the end. Robert Clark improved on his qualifying results to narrowly miss the podium in fourth while Doug Ostholthoff was fifth.

Following suit to many of the other class pole position winners on the weekend, Brent Gernert held on to the point from the drop of the green flag to stretch a large gap on the rest of the VS200 field. Taking a commanding race win, Gernert was the man of the hour and was joined on the podium by Jim Hallman and Tom Kane in second and third respectively. Simon Green showed pace on his drive to fourth while Vincent LaManna held on to fifth over the nine-lap affair.

With a pole position and win in race one, Brent Gernert lined up on the preferred inside row one for race two as he looked to sweep the weekend. Jim Hallman and Tom Kane slotted themselves into second and third respectively for the start, just ahead of Simon Green and Rhett Merriman.

Gernet made it a double-win weekend as he topped the podium blocks in Sunday’s VS2000 finale. The driver of the VS2000 class this weekend, Gernert’s fastest lap time was nearly a second faster than his rivals. Jim Hallman and Tom Kan joined Gernert on the podium in second and third as Greg Miller and Rasim Tugberk finished fourth and fifth respectively.

Missed our 2023 schedule announcement, click HERE to read, and begin your new season of planning.