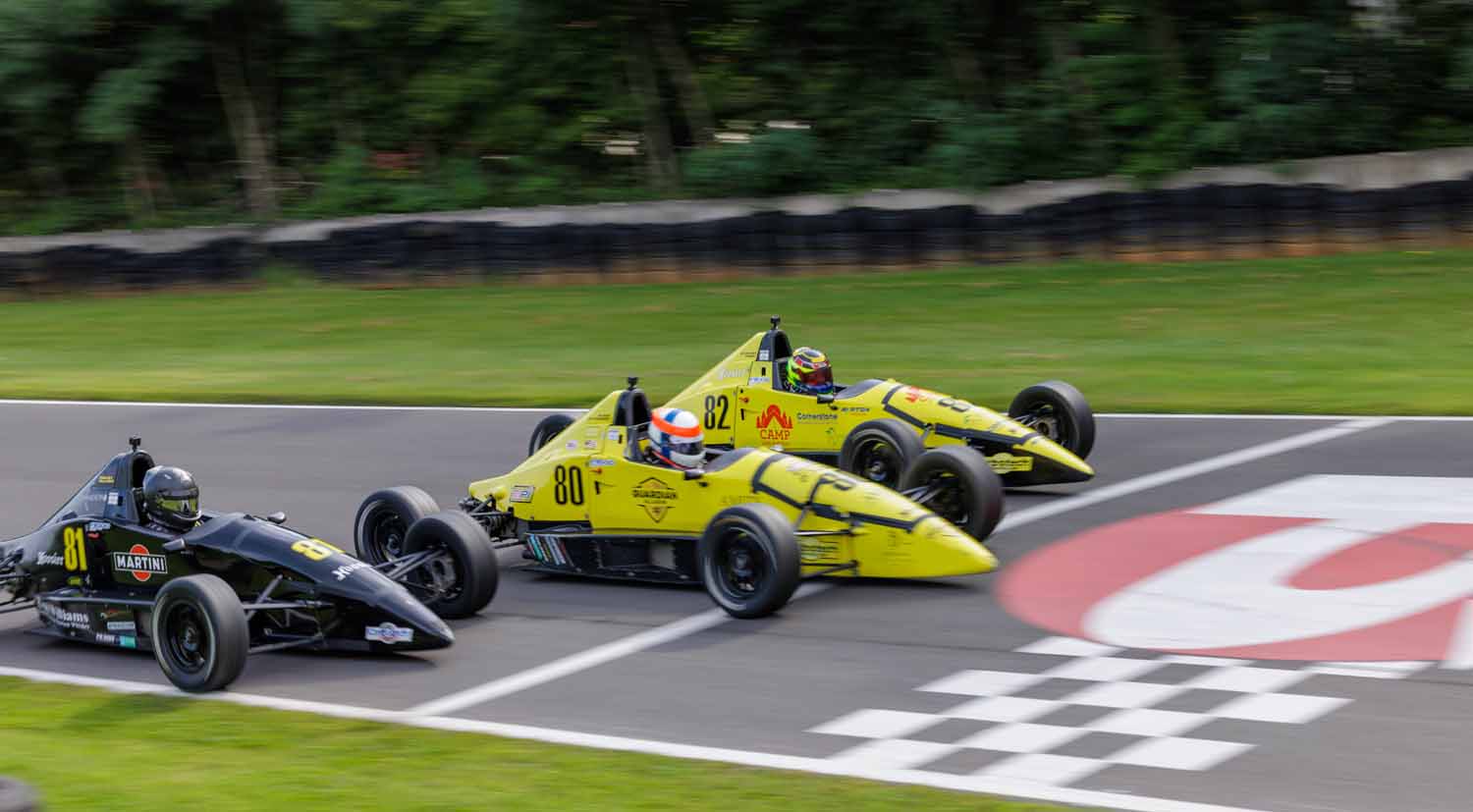 Taking place at the Summit Point Motorsports Park, Formula Race Promotions (FRP) teams and competitors were back on track for their penultimate race weekend. With a jam-packed schedule that featured very close finishes, teams and competitors will shift their focus to the final round as championship battles shape up with one event remaining.

“The race action was intense this weekend, and we had some of the closest finishes of the season,” explained Bob Wright. “All three F1600 races were determined by less than a tenth of a second and in many instances, the top-five had some minor separation. We have some exciting showdowns for championships as we head toward the final weekend at PIRC.”

Wright added, “The next and final stop for the 2022 Formula Race Promotions program will be October 14-16 at the Pittsburgh International Race Complex. This is a great time to try the FRP series or get your 2023 race season started early. We look forward to welcoming new and existing drivers to our second Pitt Race event weekend of the season.” 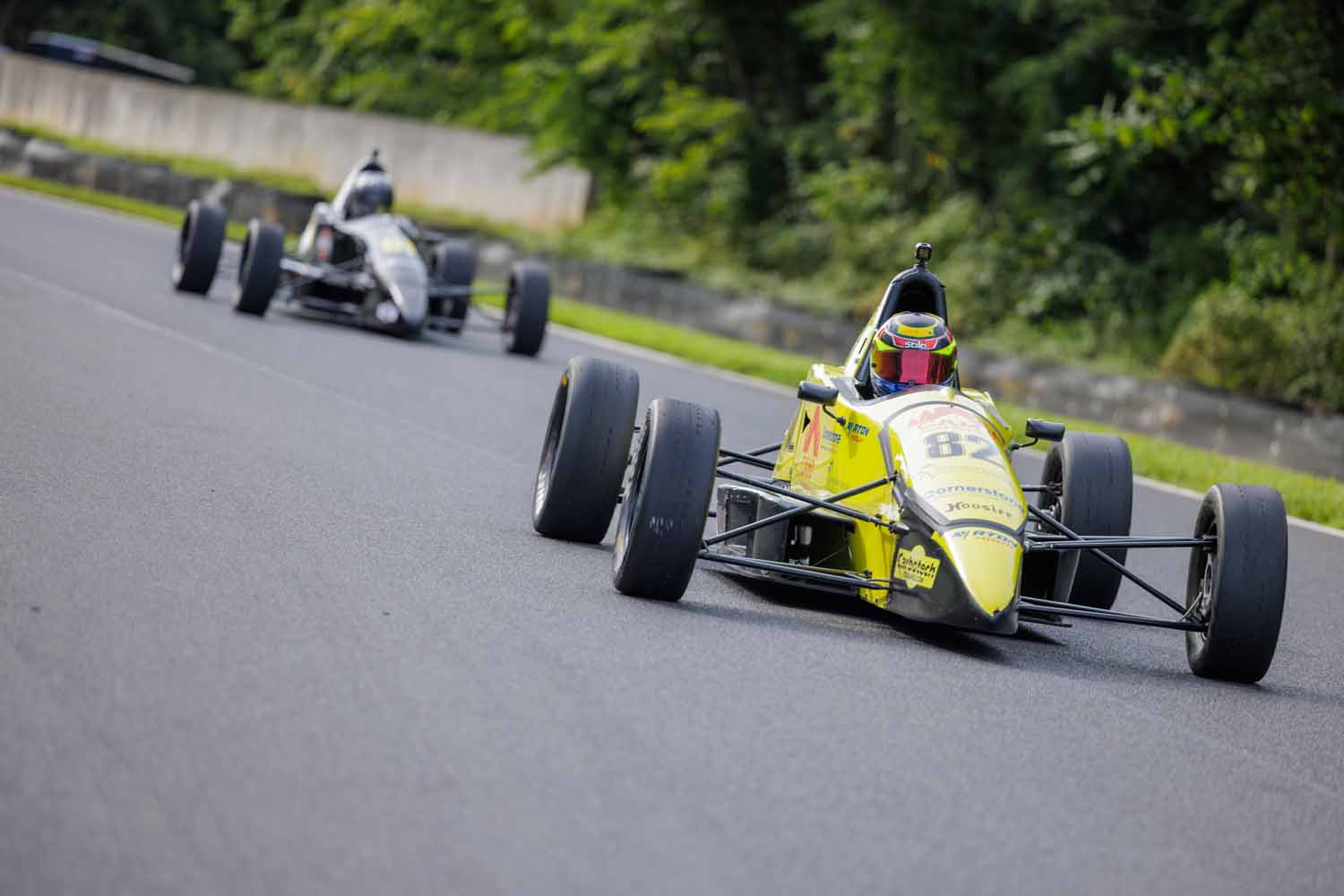 While he did not start in the top-five, it was Team Pelfrey’s Nolan Allaer who took top honors in the 17-lap F1600 race. For 14 laps, this race was a classic battle amongst the lead pack of 6 with the now accustomed frequent lead & position changes. With 3 laps to go, contact between Schrage and Houk would end Houk’s race, and drop Schrage to the back of the lead pack. On turn 10, the last turn of the final lap, Brienza & Esterson held a firm lead, but contact would send them both off into the gravel, and upon their return to the track, were swiftly overtaken by Allaer and Lee. At the checker, it would be Allaer with a dramatic win by .197 over Brienza, followed by Lee and Esterson who was knocked back to a disappointing 4th. The front quartet all finished within .654.

Scott Rubenzer grabbed his first F1600 Masters win of the weekend as he finished sixth overall but top amongst the masters. Rob Albani and Bob Reid joined Rubenzer on the podium in P2 and P3 while Mike Scanlan and Theo Peppes rounded out the top-five. 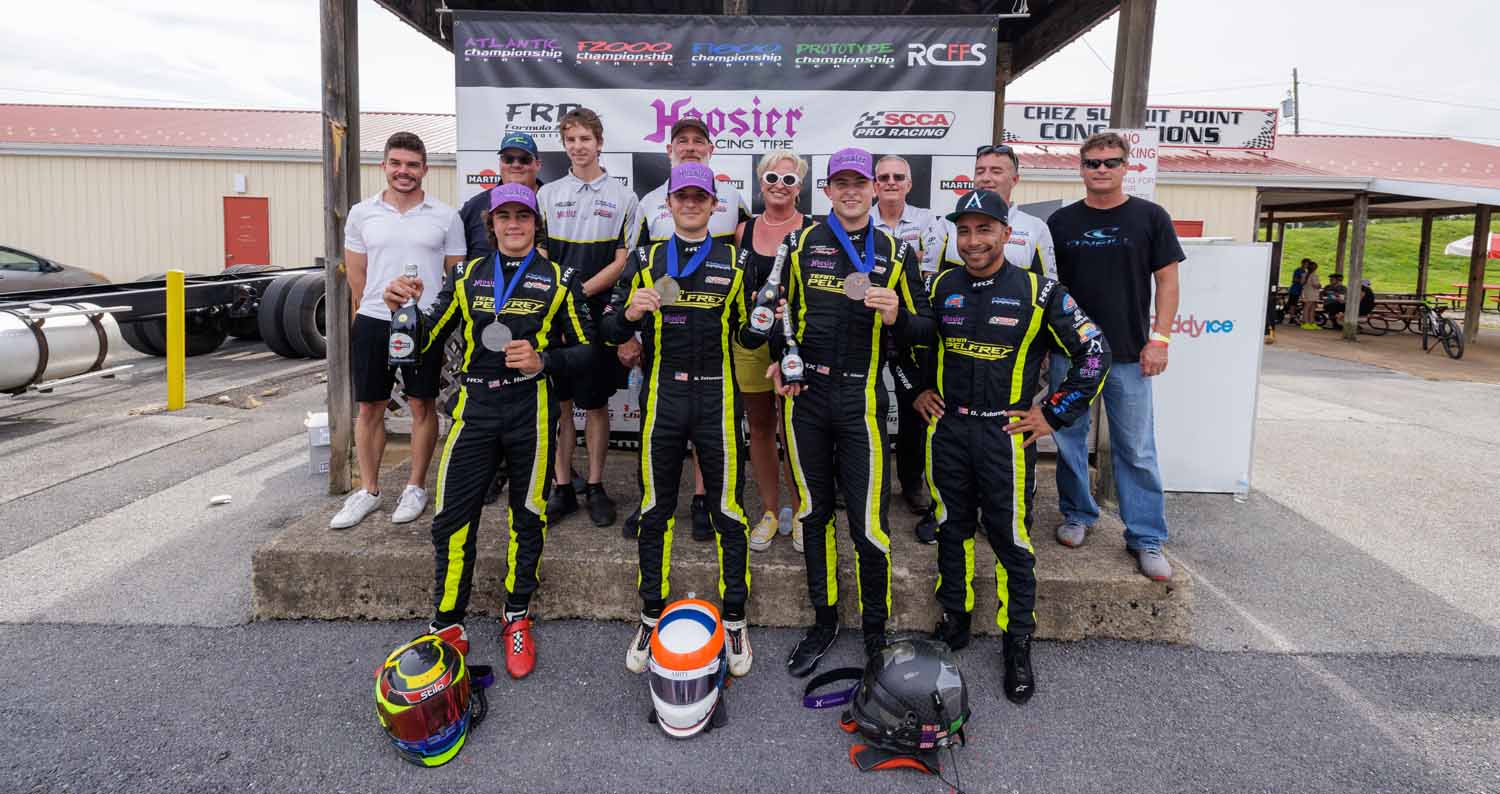 With lap times from race one setting the grid for race two, Houk earned the pole position ahead of race one winner Allaer. Hugh Esterson began his quest for the race two win from the inside of row three next to Rice Race Prep’s Gordon Scully and just ahead of Scully’s teammate Thomas Schrage. In a comparatively calm race, it was Esterson who climbed to the top in the second F1600 race of the weekend as he took the win in another very close finish. Outdueling Houk to the line, Esterson earned the top spot by .022. With Houk crossing the line second, and Allaer finishing third, it was an all Team Pelfrey podium, all crossing the line within thousands. Brienza added his second top-five finish of the weekend putting his #92 entry in the fourth position, just ahead of Lee in fifth. Scott Rubenzer, as FRP’s elder F1600 statesman, effectively dogged the front pack for the entire race taking another master’s win with Theo Peppes from K-Hill Motorsports and Bob Reid joining him on the podium in second and third respectively.

Courtesy of the fastest lap in race two, Lee earned the race three pole position and lined up next to Brienza in second. Schrage and Allaer occupied row two with Esterson and Houk in row three. Brienza stalled upon leaving the false grid and dropped back multiple rows for the split. Mistakenly, he regained #2 spot for the green flag which would cost him a five five second penalty added to his total time putting him back to 6th in the final results.

After 17 laps of close racing, contact between teammates Esterson & Allaer on the final lap dramatically changed the final charge for the checker. Crossing the line was Brienza in front (but dropped to 6th due to his time penalty) followed by Houk, Schrage, and Lee whom all stood on the podium for the final event of the weekend.

Rob Albani crossed the line fourth but was first of the F1600 Masters drivers. David Adorno earned fourth in class and fifth overall with Albani taking the Masters victory, it was Scott Rubenzer and Mike Scanlan who joined him on the podium in second and third with Bob Reid and Dave Petzko rounding out the top-five. 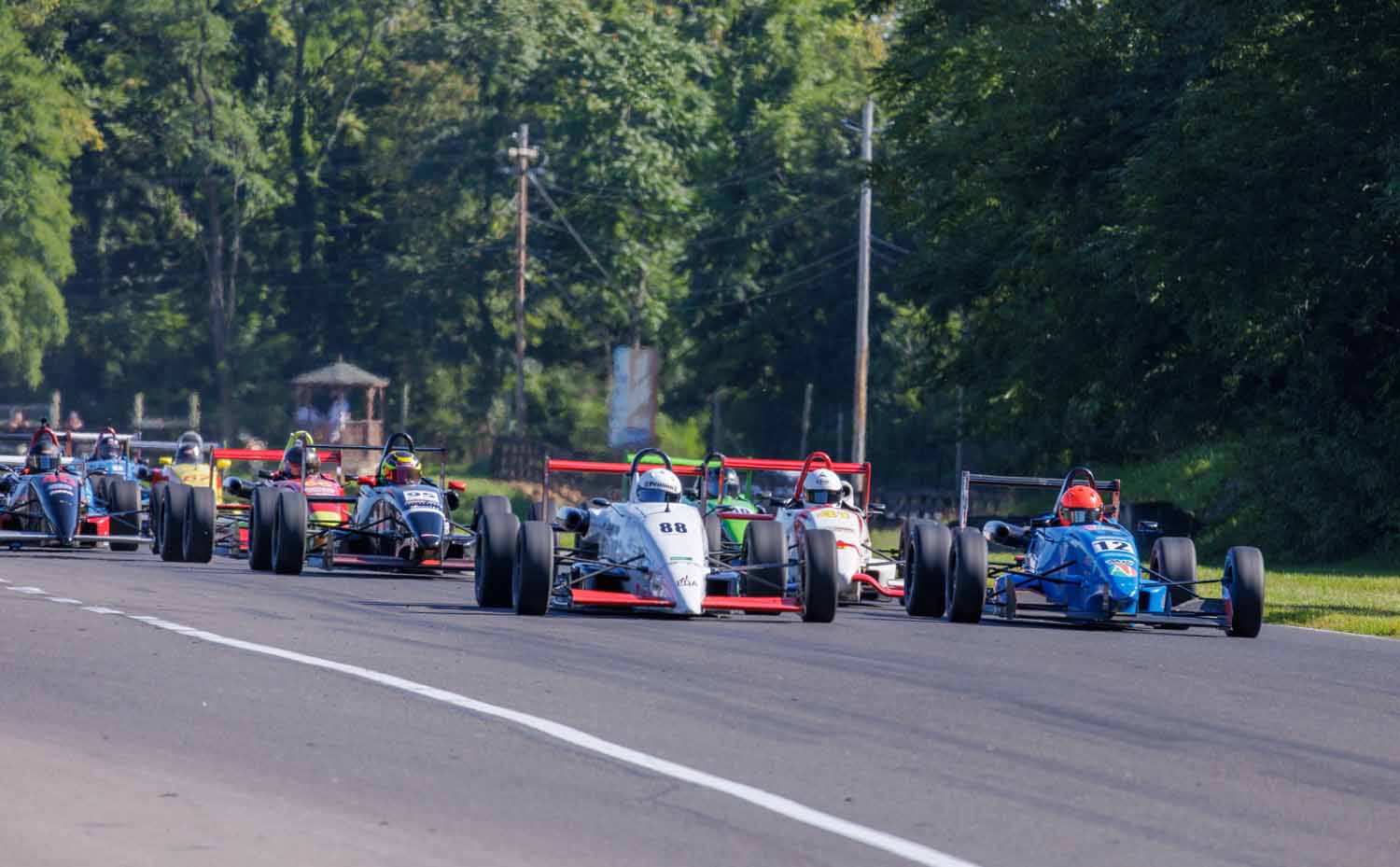 It was Tim Minor who converted his F2000 pole position to the race one victory en route to the fastest lap in the 21-lap race. Global Racing Group’s JC Trahan was the best of the rest crossing the line in the second position as Gabriele Jasper was present on the podium with a solid drive to P3 after qualifying fifth. Robert Wright missed his chance to stand on the podium in race one but managed a drive forward into the top-five to finish fourth with Ayrton Houk rounding out the top-five. 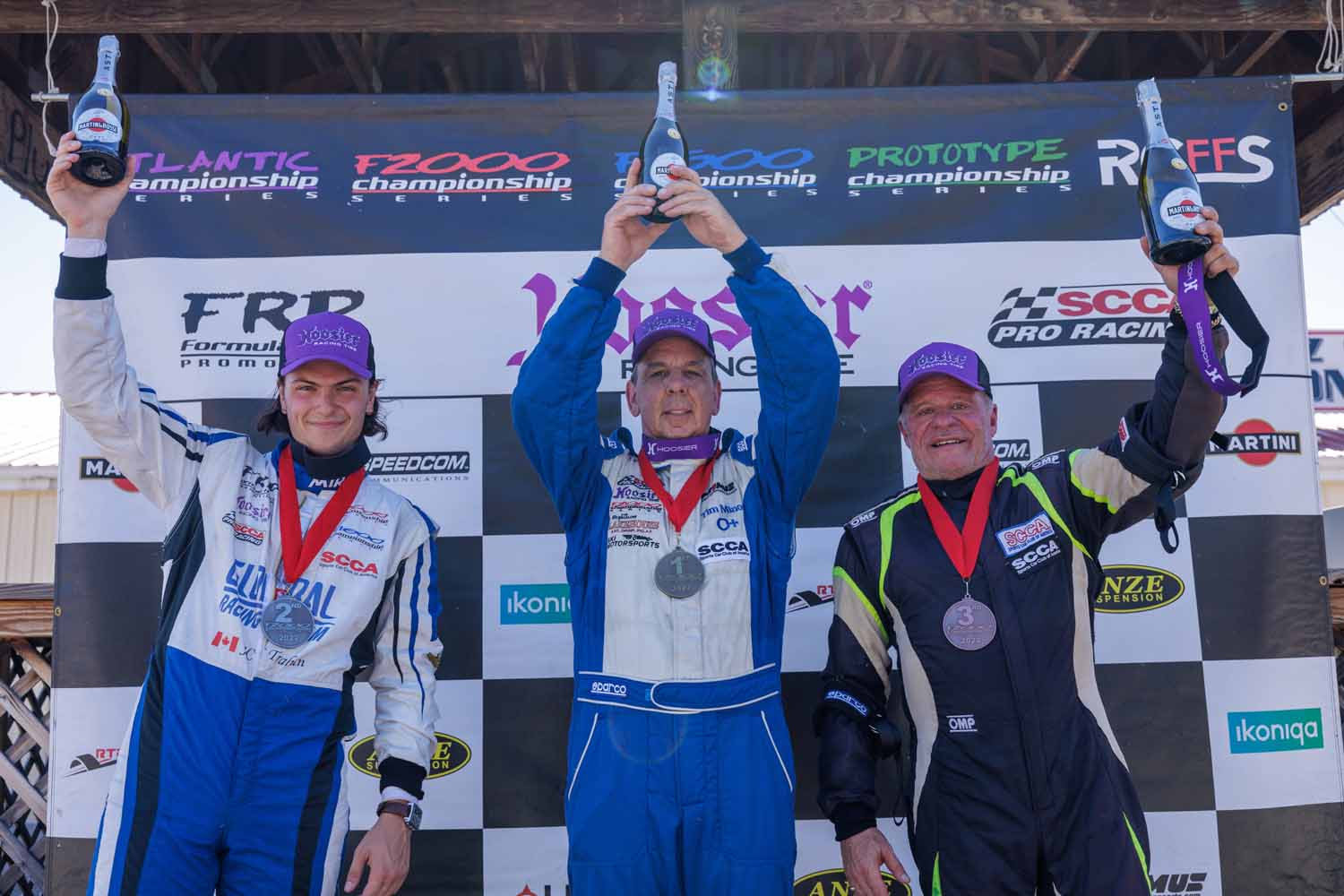 Tim Minor picked up his second race win in as many races as he went on to sweep the F2000 action this past weekend. Minor was unbeatable when taking the pole position for both races and climbing to the top step of the podium twice. JC Trahan nabbed his second podium of the weekend ahead of Glenn Cordova who leveled up two positions when the green flag flew. Arrive Drive Motorsports driver Ayrton Houk was able to secure P4 on the results sheets as Austin Hill ended his weekend with a fifth-place finish.

Garrett Dettman was another driver who capitalized on his pole position once wheel-to-wheel action began to score the first RCFFS race win on the weekend. Wayne Nicolette climbed from his third-place qualifying effort to stand on the second step of the podium while Mark Kingham fell from second to third. Sam Eyer gained one position in the ten-lap race to cross the stripe in fourth while Steve Oseth finished fifth.

Mark Kingham found his way to the top of the results board in the second RCFFS race as he outpaced Chip Van Slyke to take top honors. Van Slyke crossed the line in the second position while Steve Oseth improved on his race one result of fifth to finish on the podium in third. Brandon Weber had a solid drive forward to close his weekend with some momentum in the fourth position while Mark Walthew followed him closely in fifth. 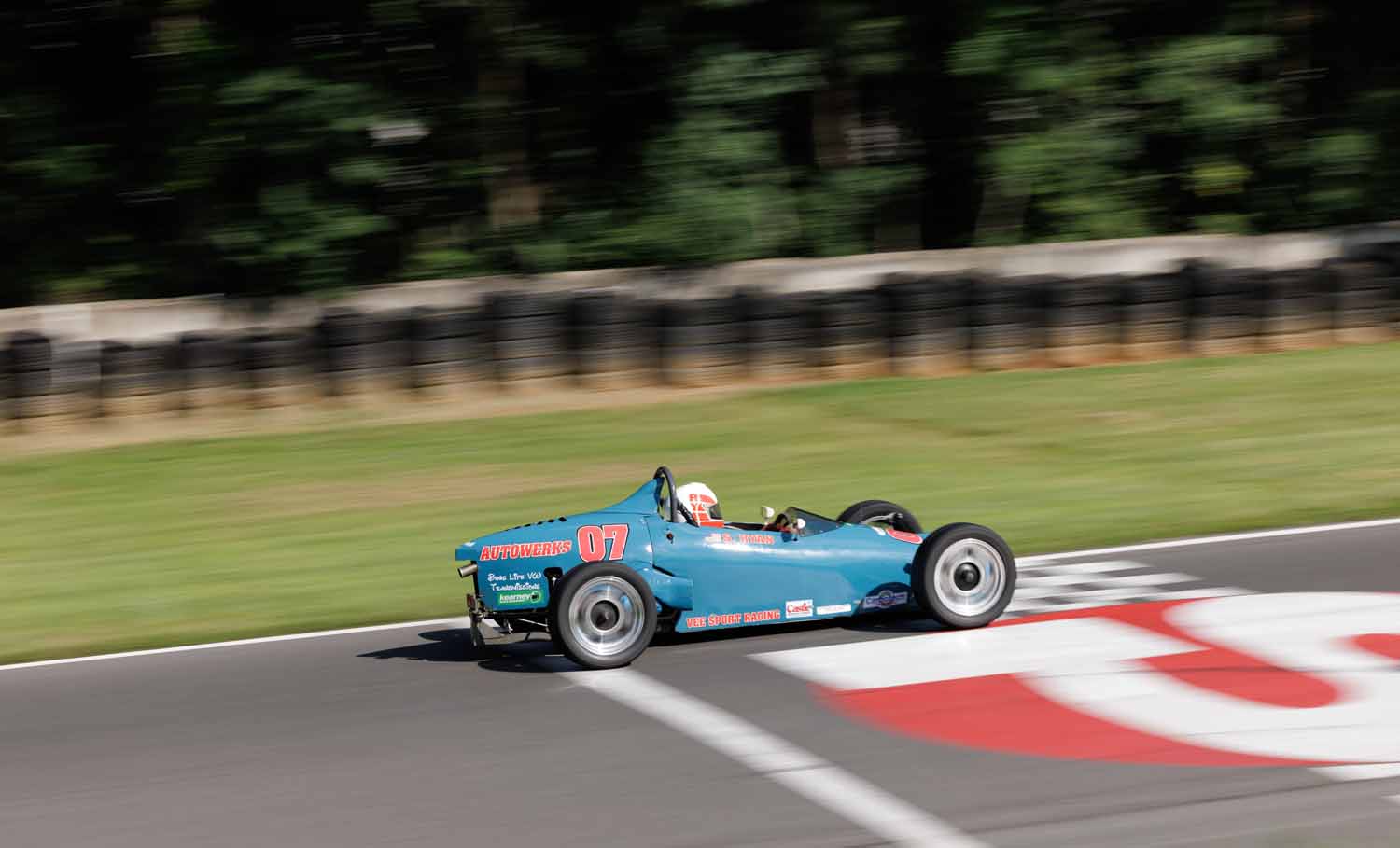 Sam Ryan gained two positions from his P3 starting spot to take the Formula Vee race one victory in the 13-lap wheel-to-wheel race. Raymond Carmody held station from his second place starting position to stand on the podium in second while Jeffrey Filiokowski joined them in third. Pole position winner Sheman Engler fell back when race action began to finish just off the podium in fourth while Jack Maloney earned himself a fifth-place finish.

A familiar name rose to the occasion in the second Challenge Cup race of the weekend as Sam Ryan took the victory by a scant .048. William Hannum rocketed up from his fifth-place starting position to earn the second step on the podium while Raymond Carmody was third. Race one pole position winner Sherman Engler started second in race two but closed his weekend in fourth while race two pole sitter Jeffrey Filipkowski crossed the stripe in fifth.

Join us at the Pittsburgh International Race Complex Park over the October 14-16 weekend, with a full slate of FRP classes. Information and links to register for the event and the Track Sponsored Test day can also be found at www.RaceFRP.com.

For questions, comments or concerns, please feel free to reach out to Bob Wright RobertW@RaceFRP.com or Clay Hutchinson ClayH@RaceFRP.com. For media inquiries, please contact us via email at Media@RaceFRP.com