Simon Sikes Battles to Victory in PIRC Race One! 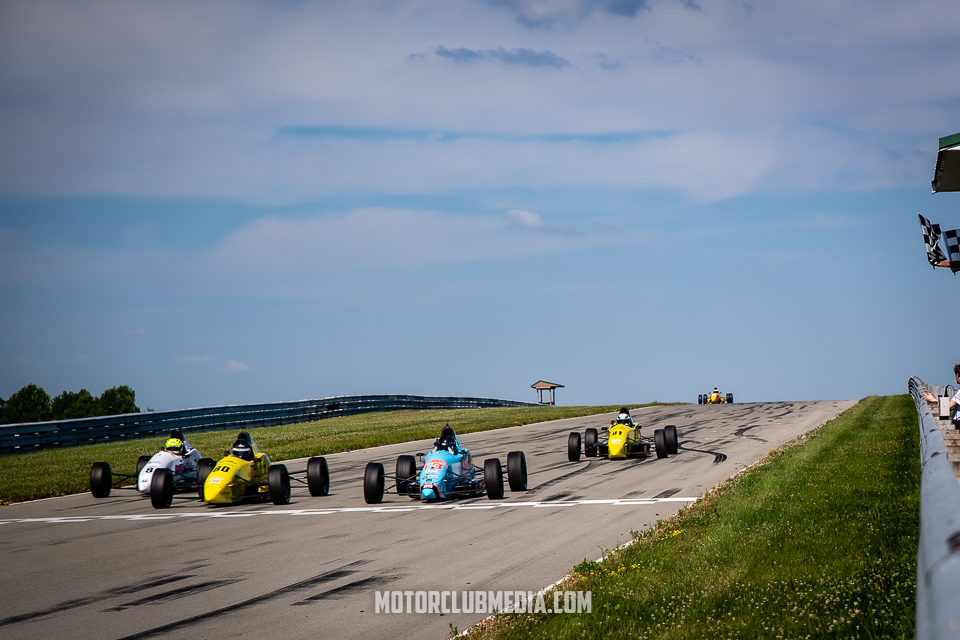 In hard fought race one, Simon Sikes pipped Josh green at the line by a scant .022 of a second.

On the front row sits Jonathan Kotyk, he holds pole. Josh Green is in the second spot. These two represent first and second, respectively, in the championship standings. They are separated by just a few points. The championship is a near dead heat at this, the fifth event on the seven event calendar.

The pace cars lights are out and the green flag flies. Josh Green gets the jump, he goes cleanly around the outside in turn one and into the lead. Kotyk fell to second, Simon Sikes to third, Dexter Czuba to fourth, and Chris Horan in fifth. The swarm of bees raged through the esses and down the back straight, as they return into sight the top three are the same. Chris Horan finds himself in fourth now, he’llhave close a small gap to the top three.

Sikes got by Kotyk now, the pass happened in the bowl section of the track, the top three are evenly spaced. There’s maybe two or three tenths between each car. Czuba returns to fourth, relegating Horan back to fifth. There are twelve laps to turn, the gap from Czuba to third place Kotyk is about one second. It’s Sikes’ turn to lead, he gets by Green into turn one. Green takes a look down the inside of Sikes into turn three, it’s not to be, he has to back out. Kotyk still follows in third. Czuba has found his way to the tail of Kotyk, he’s brought Horan and Bryce Aron with him.

Ten laps to go, Green Takes the lead from Sikes in turn one. As the lead pack enters turn three, Czuba goes by Kotyk. The top three look strong, Kotyk isn’t hanging on quite as securely as I’m sure he’d like to. Horan is far enough back that he’s likely out of the draft, he’s secure in the fifth spot as sixth place Charles Anti is some five seconds removed.

They cross the line, eight laps remain on the counter. It’s Green, Sikes, Czuba, but a moment later Sikes drafts by Green to take the lead. Kotyk sits in fourth, he’s not playing the games that the top three are, but he’s still in the race. Speaking of games, if the top three keep it up, Horan might find himself back in the fight.

With six to go, Kotyk moves himself up to third. There’s a bit of a shemozzle in turn one, Sikes finds himself with some breathing room, it’s maybe a half second. Green is backed up into Kotyk, Czuba sits tight in fourth. It doesn’t stay that way for long, as we know the draft can change things quickly, and Josh Green goes by Sikes to take the lead. Kotyk still stalks in third. The top four are nose to tail.

Four laps left, it’s Kotyk to lead, but he gets a poor run off of turn one, Josh Green gets the lead back on the entry of turn three. Kotyk falls to second, Sikes to third, Czuba sitting coy in fourth.

The leaders cross the line again, three laps to turn this time by. Kotyk leads again, but Green repasses into turn three. Certainly the drivers are playing their strategies out in their minds, what will it take to lead across the line when the checker flag waves?

With two to go, Green crosses the line first. Kotyk attempts a pass into turn three, Sikes takes a look on Kotyk, they briefly go three wide! No passes are successful, Green stays out front. They rage towards the ultimate lap, the top four are covered by just a half second. It’s Sikes now, he’s out front, Green to second, Kotyk to third, Czuba still right there in fourth. They come into sight, Sikes and Green have some space now, Green gets by Sikes into the esses. Kotyk now out of reach of the top two, he will have to fight Czuba.

Down the back straight Sikes gets a run, it’s not clear if the pass was made. They come over the hill towards the finish line, the checker is waving, Green and Sikes are side by side. It’s too close to call! Timing declares that it’s Sikes for the win! Green is second, Kotyk third, Czuba fourth, and Horan Fifth.