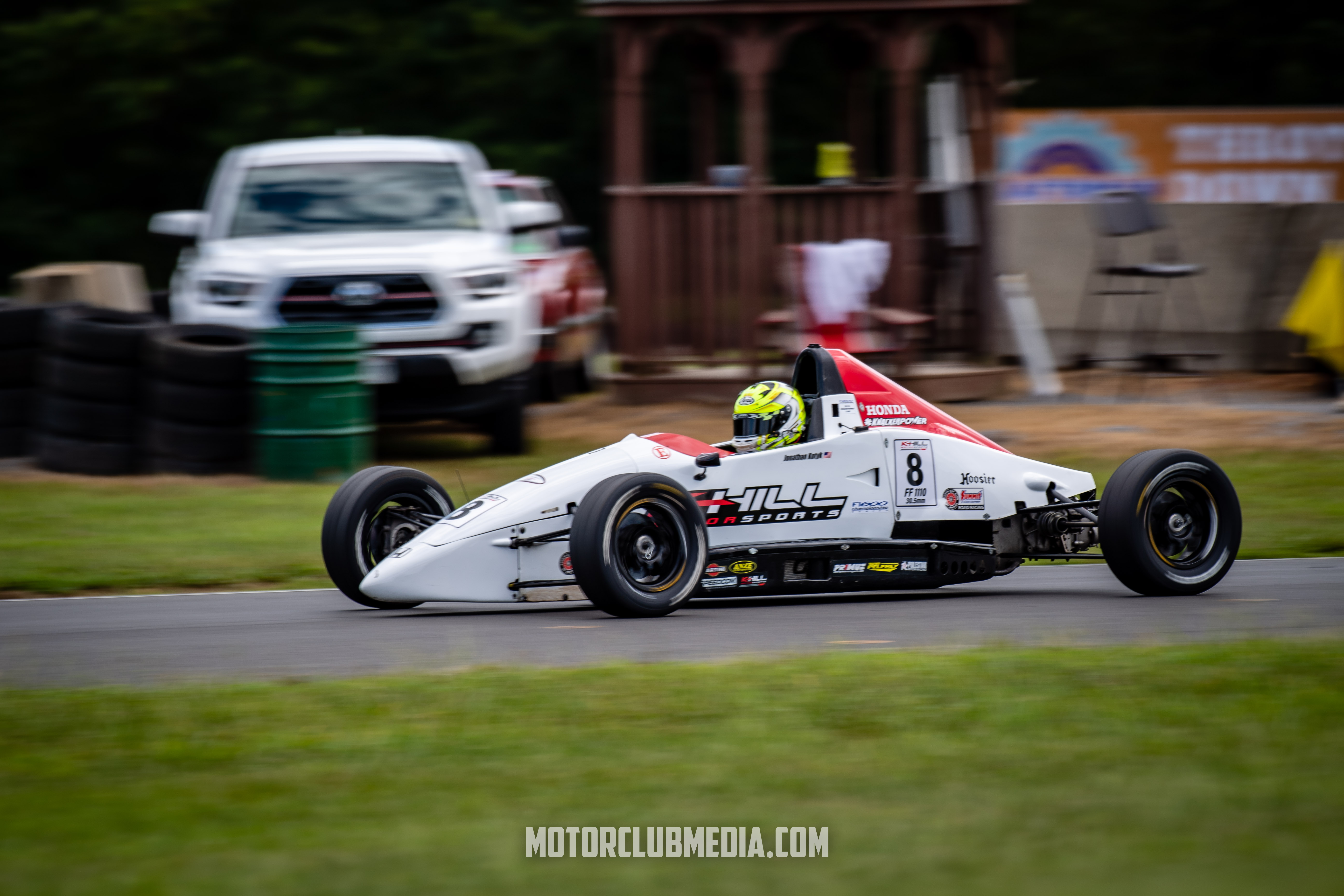 Jonathan Kotyk took advantage of the clear air in front to pull away from the pack. He was rewarded with the win in race two here at Summit Point.

For race two the top three assembled in the same order they finished in race one. Josh Green took the top starting spot. Jonathan Kotyk sits on the outside of the front row, and Bryce Aron starts third. Joe Colasacco is the fastest of the master’s and starts fourth, Jackson Lee is fifth, and Charles Anti completes the third row by starting sixth. The weather remains beautiful, there’s medium cloud cover with very hospitable temperatures sitting in the mid-seventies. All eyes are on the battle between Kotyk and Green as the point standings have the two in a near dead heat.

To the green flag it was Josh Green again getting the jump. Kotyk found himself hung out to dry but he secured the second spot. Meanwhile, Charles Anti made a good charge to get into the third spot. Bryce Aron fell to fourth and Jackson Lee to fifth.

At the start of their third lap, Kotyk and Aron get by Green going into turn one. Green falls to third. Charles Anti is now in fourth, Jackson Lee follows closely in fifth, and Burton August in sixth. The top six are covered by around four seconds.

With eleven laps to go, Kotyk finds a small lead, he’s got a single second between him and Josh Green. Meanwhile, Green has to contend with Aron who is hounding him hard. Jackson Lee and Charles Anti sit in fourth and fifth less than a second behind second place Green. The next time by the start line, Lee gets a mega-tow, he goes by both Green and Aron into turn one.

As they cross the line to get to half way distance, Kotyk has benefited from the fighting behind. He’s got a one and a half second buffer to Jackson Lee. Of course, only a moment later Green replaced Jackson Lee for second, and Lee errored, he went off the outside of turn one. The race for second is one car less now. Again, Kotyk’s lead grows, it’s over two seconds now.

With seven to go, things are only getting harder for second place Josh Green. Bryce Aron continues to battle him, they go side by side through turn one. Charles Anti has inherited fourth. Burton August is closing on Anti though, and with plenty of racing left the two look destine to fight. The fight between Green and Aron only serve to encourage Anti, as the two ahead slow each other Anti is now in touch. Burton August continues to close in as well, the battle for second is getting larger. Out front, Kotyk is comfortable. The gap is four full seconds.

Five laps remain, the battle for the master’s category has Joe Colasacco in the lead, Scott Rubenzer is second, and Mike Scanlan is third. Colasacco runs sixth overall.

The fight for second rages on. Green holds the spot but Aron continues to make life difficult. Anti and August stalk just out of reach. Two laps remain and Aron passes Green into turn one.

At the white flag Green and Aron go side by side, Aron hold Green to the outside. Off of turn one, Green gets a better run and attempts an inside-outside maneuver. Aron holds the better line into turn three, there’s nothing Green can do and again falls into the third slot. Aron is still in second heading into the back section of the track. Green finds an advantage though, he gets by Aron before the final turn. Kotyk cleanly wins the race, behind, Green and Aron have a drag race to the line. It’s Green for second. Aron finishes third. Burton August gets his best finish of the season in fourth, Charles Anti is fifth. The master’s win went to Joe Colasacco. Mike Scanlan was able to get by Scott Rubenzer to finish second, Rubenzer would fill the master’s podium in third.