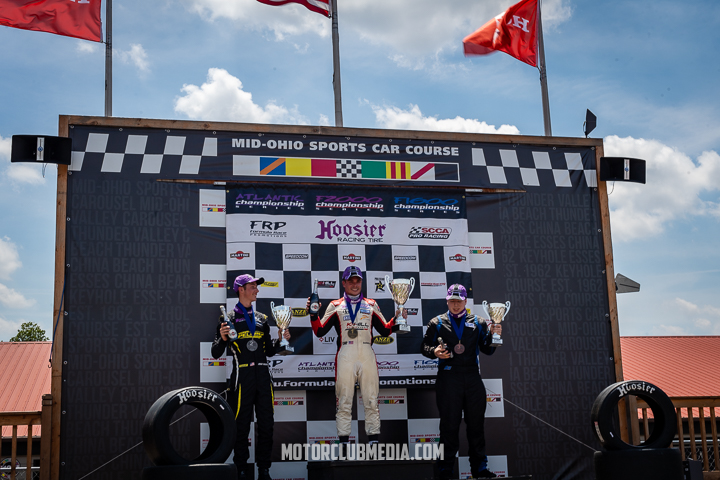 Race two of the F1600 Series at Mid-Ohio came down to a last lap pass that gave Jonathan Kotyk the win!

Jonathan Kotyk again at the point, he lead the F1600 competitors for the start of race two. As the green flag flew, Kotyk held the lead into turn four. Josh Green was again second, he fell safely into line around the outside of turn four. At the end of the lap, it was Alex Scaler in third, yesterday’s podium finisher Dexter Czuba in fourth, Ayrton Ori in fifth, and Chris Horan in sixth.

The event, set for eighteen laps total, was experiencing the coolest conditions of the weekend, but it was still a balmy seventy some degrees with very high humidity. The conditions weren’t discouraging the drivers any, on lap three Josh Green bested Kotyk around the outside of turn four and lead the race. Kotyk wasn’t satisfied though, and by the time they reached turned thirteen he was back in the lead. A pack of six had again formed at the front. Christian Lall Dass was in seventh but losing touch.

On the fourth lap, the battle raged. Kotyk still playing hard to get, Alex Scaler had taken the second spot and was ready for an attempt on the top spot. Green fell to third, leading his two Pelfrey teammates of Czuba and Ori, privateer Chris Horan still right in the battle in sixth.

The Pelfrey boys looking a little impatient now, a small gap between the second place of Scaler and third of Green formed, Ayrton Ori pushed by his teammate Green to take the third spot. Meanwhile, the lead changed. Alex Scaler in his Rice Race Prep entry got by, the pass left Kotyk a bit vulnerable and he fell back into the clutches of the third place driver which was again occupied by Josh Green. Scaler officially leads the lap, but by the time they reach turn four Kotyk is interested and has a look, but it’s not to be. Scaler has learned some lessons from Kotyk and the pass is well defended.

Ten laps remain, Kotyk regains the lead, it’s Scaler in second, Green in Third, Ori in fourth, Czuba in fifth, and Horan in sixth. The pack has grown, Christian Lall Dass overcame the gap and is now officially a member.

Green retakes Scaler to find himself in second, Kotyk leads. The Pelfrey boys of Ori and Czuba duke it out for fourth and fifth leaving Horan little space to make any attempts on forward progress. Dass still looms on the tail of the pack.

Seven laps remain, the lead pack settles in a bit, there’s less passing but the lap times take a tumble. Every single driver in the top eight sets a personal best time.

Scaler makes a small mistake in turn six, a slight miss of the apex and the wolves devour him. He falls to fourth. It’s still Kotyk in the lead, Green in second, Ori in third. Scaler’s mistake and the subsequent jockeying has let Kotyk and Green build a small gap, it’s almost a full second.

Five more times to circulate, Green tries Kotyk on the outside of four, it again is in vein. Ori makes an error and Scaler is back in third, the pack has grouped back up again. Scaler and Green go side by side through turns four and five, Scaler is left on the outside in six, a huge oversteer strikes! He wrangles it back in and even manages to hold onto third. Scaler’s loss of momentum bogs the pack down and again Green and Kotyk find themselves with some room to work.

The lap counter shows three to go, the draft being ever present, the pack is again nose to tail. Less than three seconds across the top seven drivers.

Into turn four, it’s Kotyk on the inside, Green in the middle, and Scaler on the outside. They go three wide through turn four! Only two laps remain. Green leaves turn six with the lead, Kotyk in second, Scaler in third. They round the carousel and the white flag flies.

They come back into view at turn four, Green has fallen to sixth. For the lead, it’s Scaler, no it’s Kotyk! Kotyk makes a massive dive down the inside. He comes out the better by the exit of turn five.