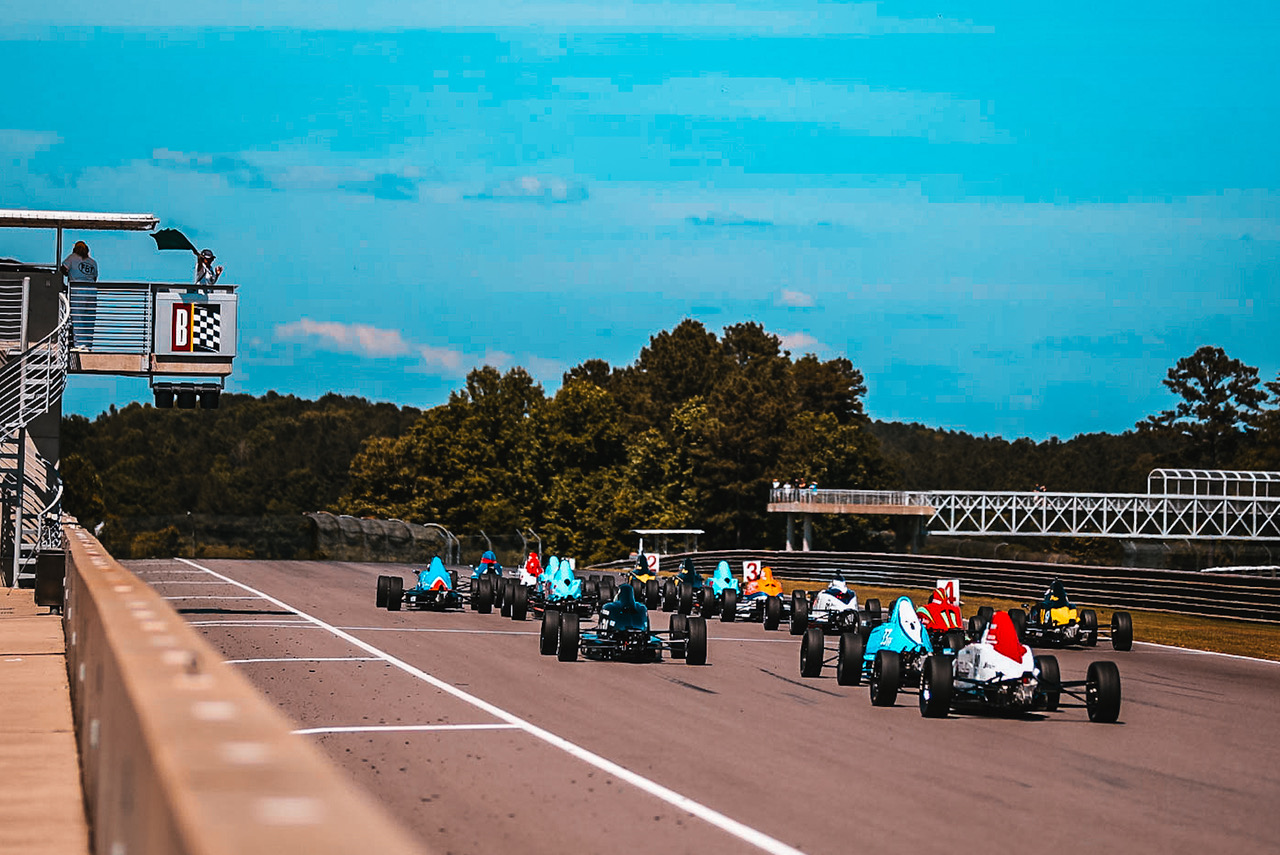 In the third event of the 2021 season, Formula Race Promotions (FRP), competitors traveled to the picturesque Barber Motorsports Park in Leeds, Alabama this past weekend. With five classes in action, drivers in the F1000, F1600, F2000, Atlantic, and Eastern Pro 4 Challenge would take to the 2.38-mile natural terrain road course in the search for race wins, podium results, and valuable points towards the end of the year championship battle.

“It was great being part of the Historics race weekend,” explained Bob Wright. “While our schedule was spaced out, it did provide for a relaxing race event and allowed us to visit both everybody in the paddock and the spectacular bike museum. Barber is one of the premier facilities in North America, and we are happy to have the opportunity to compete at such a great venue.”

Wright continued, "As for the racing, it was in typical FRP fashion as usual. Close finishes and wheel-to-wheel racing. We continue to build some of the best driving experiences on track and look forward to the rest of the 2021 season and having new drivers join the FRP.” 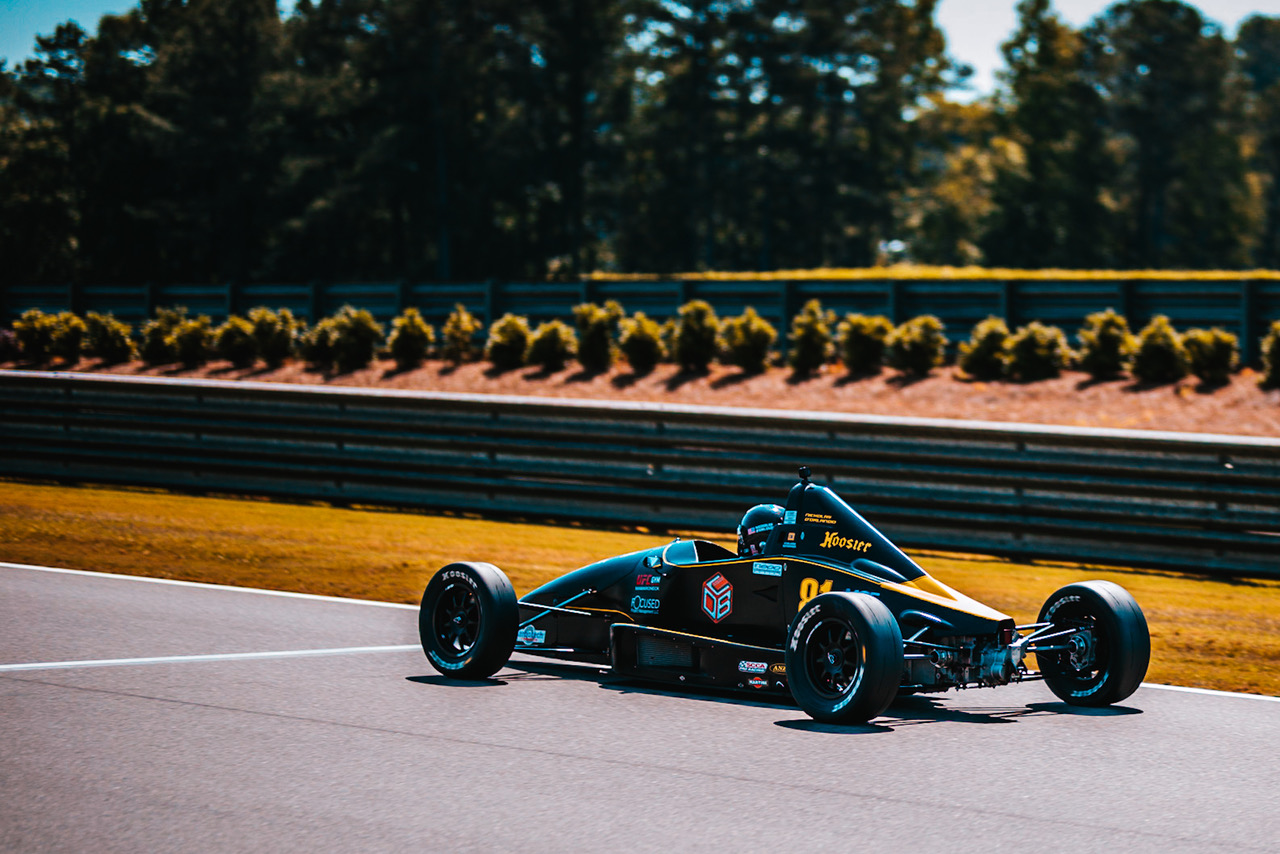 Kicking off qualifying on Saturday in the F1600 class it was Lee Racing’s Jonathan Lee who scored his first pole position of 2021. Lee outpaced Team Pelfrey’s Nicholas d’Orlando by .032 with KHill Motorsports Ax Kametches in third. Team Pelfrey put two drivers in the top-five with a solid drive from Hugh Esterson as Rice Race Prep’s Dexter Czuba rounded out the top-five. David Livingston Jr. took top honors in F1600 Masters with Scott Rubenzer second and Sam Lockwood in third.

Lee drove to the race win in the first wheel-to-wheel action of the weekend for the F1600 drivers, courtesy of his pole position starting position while the results behind him changed drastically. Esterson was able to advance forward two positions from his fourth-place starting spot to earn a second-place podium result while Dexter Czuba did the same, moving forward two positions to stand on the podium in third. Ax Kametches was able to salvage a fourth-place finish while Burton Kyle August finished fifth. Nicholas d’Orlando had to park his #81 car safely on the front straight due to mechanical issues and had a disappointing “that’s racing” DNF. Masters driver David Livingston Jr. finished fifth on track but first in class while Scott Rubenzer and Sam Lockwood joined Livingston on the Master podium.

Courtesy of his fast lap in race one, Hugh Esterson lined up for the second green flag of the weekend from inside the front row, but it was his teammate, Nicholas d’Orlando who topped the podium blocks, having a lone run after breaking away from the field by lap three. An intense battle behind him ensued between the next six competitors, with positions swapping every lap. From the tower, the stewards commented, with the aid of the tracks impressive circuit wide video feeds, that this was some of the most impressive and strategic racing ever! At the checker, it was close between Lee and Kametches, with Exclusive Autosport’s Joey Brienza and Rice Race Prep’s Will Holtz rounding out the top-five. David Livingston Jr. added his second F1600 Masters win of the weekend with Rubenzer in second with Lockwood forced to retire early on.

Nicholas d’Orlando started the third and final race of the weekend from the inside of the front row as he and Esterson made it a Team Pelfrey lockout of the top two positions. Just as he did in race two, d’Orlando drove to the victory, with Esterson in the hunt for second until fading back with just a few laps to go. With an increasingly “slimy” track and an early finish due to a runaway wheel forcing a checker in lieu of the white flag, it was Brienza who was able to cross the line in second as Ax Kametches returned to the podium in third. Will Holtz was able to add another top-five result in fourth and Rice Race Prep’s Burton Kyle August joining the weekend’s top-five in fifth. Scott Rubenzer returned to form in the F1600 Masters class taking the race three win with Livingston second. 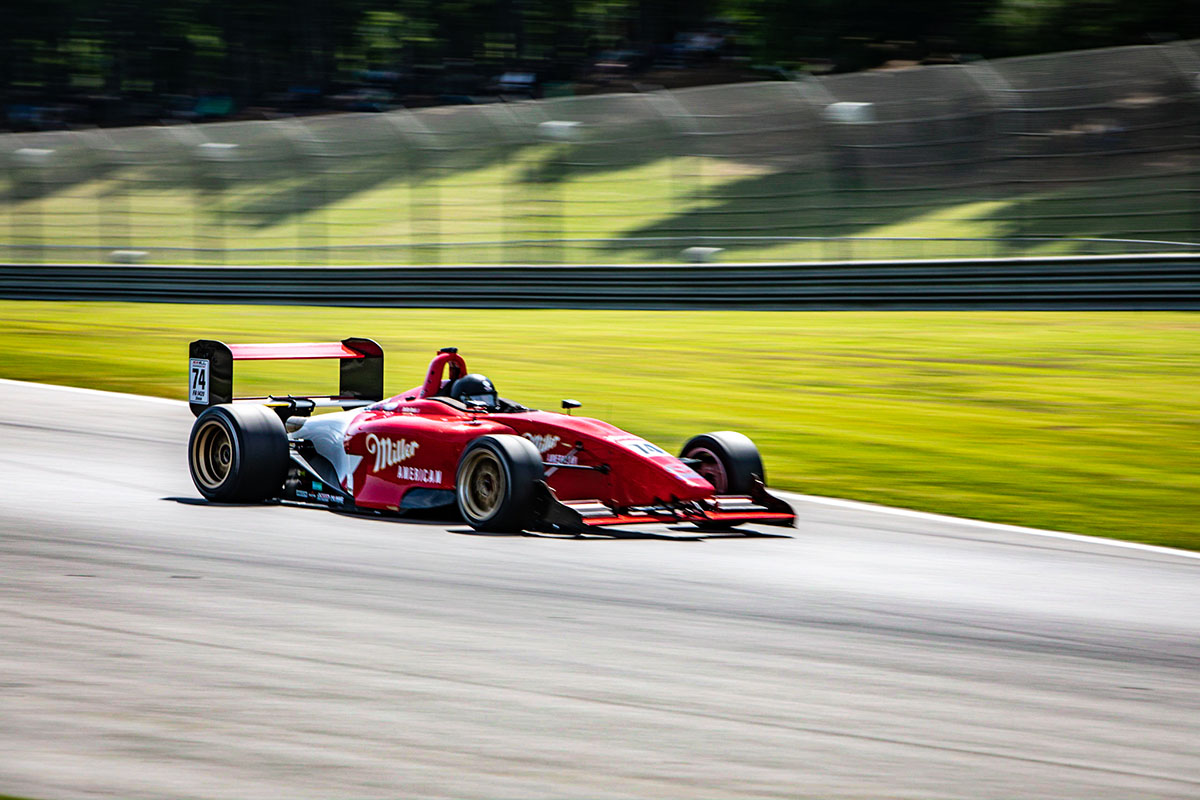 KHill Motorsports Dudley Fleck scored the Atlantic pole position as he outdueled Larry Howard for the top spot. Scoring the inside front row starting position by .257, Fleck would lead the field to green in race one. Richard Zober was the third-fastest driver of the session just ahead of Bob Corliss and Chris Ash.

It was Zober who found his way to the top of the results sheet after the first race as he took the Atlantic race win ahead of Corliss due to Fleck and Howard finding the sand in turn 14 while running first and second. A new name in the top-five, Kirk Kindsfater made his way to the podium with a third-place effort as Chris Ash and Austin Hill rounded out the top-five on the results sheets. In race two, it was Fleck who scored the race win as he disposed of Howard and Zober who earned the second and third place results. Bob Corliss found himself in fourth while Robert A. Wright finished fifth. 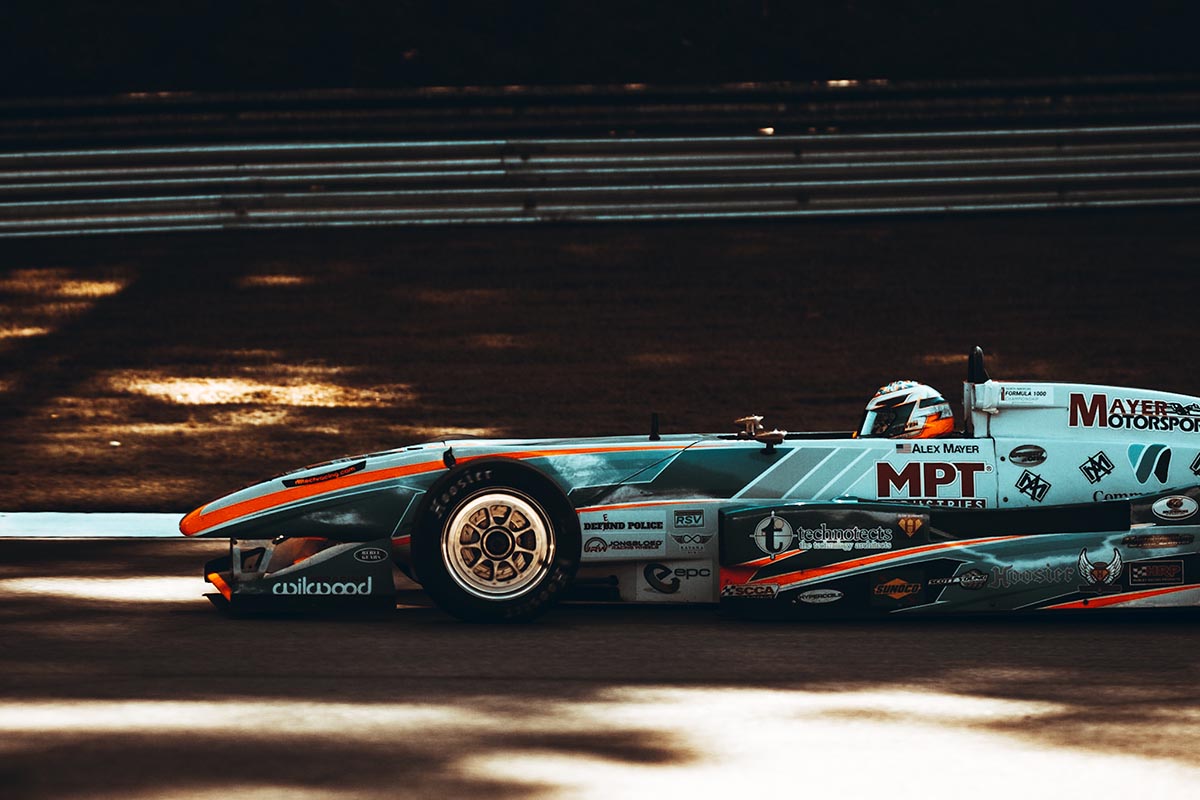 Multi-time race winner and 2020 F1000 Champion Alex Mayer scored another pole position taking the top honors in F1000. Shane Prieto was the best of the rest in second ahead of Nathan Byrd, Charles Livingston, and Stephen Hamilton.

Mayer continued his class dominance with another flag-to-flag victory en route to the fastest lap of the race. Prieto and Byrd maintained their second and third place starting positions to finish second and third and join Mayer on the podium for race one. Hamilton improved from his fifth-place starting position to earn a fourth-place finish while Tim Pierce was able to advance forward and claim the fifth position when the checkered flag had flown.

Shane Prieto was able to grab the second F1000 win of the weekend as Alex Mayer vanished on the final lap due to a blown engine and fire. Prieto was the first to see the checkered flag ahead of Nathan Byrd in second and Tim Pierce in third. Mayer was eventually classified in the fourth position as Stephen Hamilton rounded out the top-five. 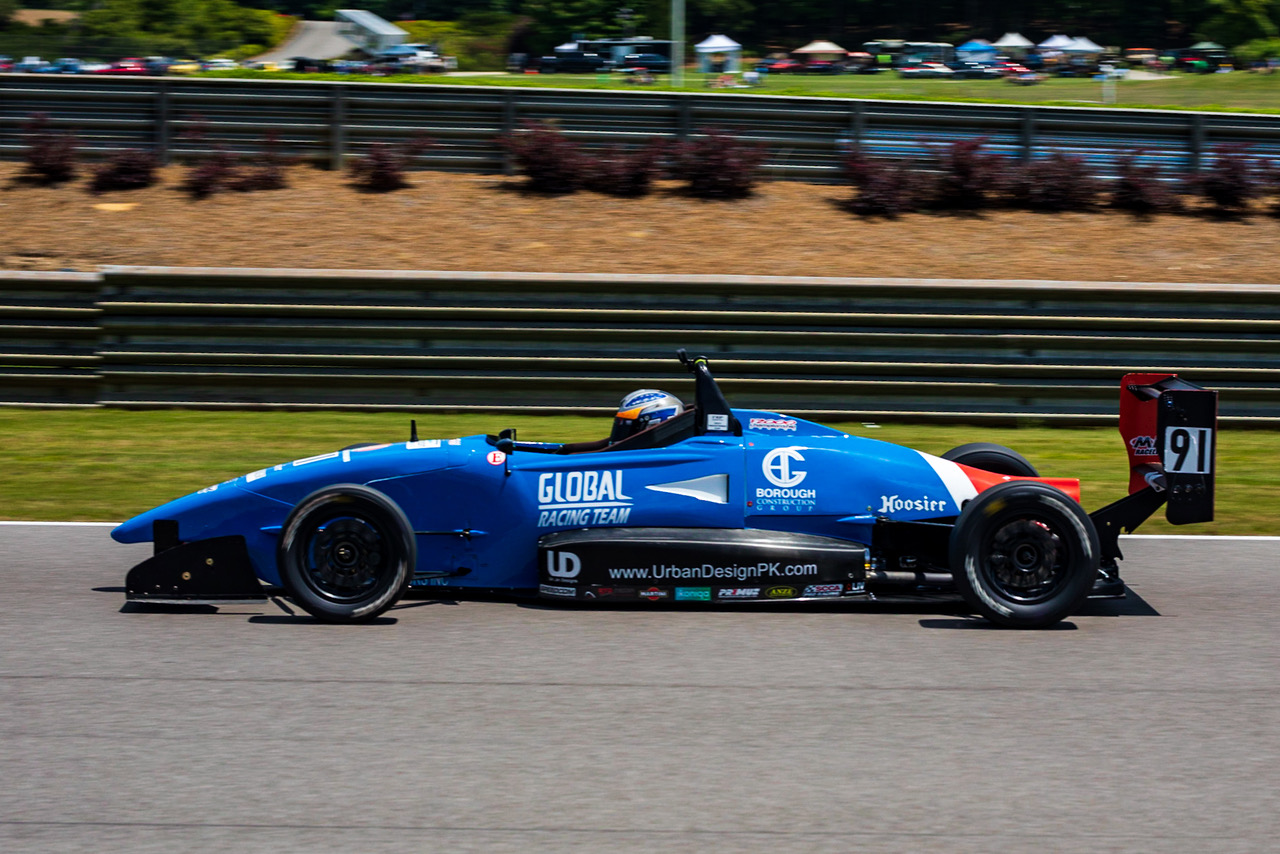 After one practice on Thursday evening and another on Friday morning, qualifying for the first F2000 and F4 races of the weekend would take place on Friday afternoon. Trent Walko and his Global Racing Team program took the top honors by a scant .079 over multi-time series champion Brandon Dixon. Walko and Dixon were the class of the field in qualifying securing the front row and turning their quickest lap more than seventh tenths faster than the next fastest challenger. Reece Everard was the best of the rest in third while Austin Hill and Robert Wright rounded out the top-five. In the Eastern Pro 4 Challenge category it was Turn 3 Motorsports Christian Weir who scored the pole position just ahead of Alliance Racing’s Hayden Bowlsbey while Robert Pink was the quickest competitor in the F2C class.

Dixon would rise to the occasion when wheel-to-wheel racing commenced scoring another win in his quest for the F2000 Championship Series title while Walko dropped one position to finish second as Robert Wright gained two spots to join Dixon and Walko on the podium after Everard had a mechanical issue. Dexter Czuba had a consistent race to earn a solid fourth place result ahead of F2C winner and sixth on track John Taphorn. In the Eastern Pro 4 Challenge side of the program, it was Weir who crossed the line fifth overall to take the class win as Bowlsbey was classified in the eleventh position overall but second in class after a first lap mishap together with Hill and McDonald.

Race two of the weekend would be led to the green by Walko as he once again was on the pole position while Dixon slotted into second. Never putting a wheel wrong and scoring his second podium result of the weekend, Walko went on to score the win ahead of race one winner Dixon. Reece Everard was able to stand on the podium in third as Czuba earned his second fourth-place result in as many races. Austin Hill was able to hold on to the final position in the top-five just ahead of Christian Weir, who took his second Eastern Pro 4 Challenge win of the weekend.

It is only a few short weeks until the next FRP event as the series will travel to the Pittsburgh International Raceway over the June 18-20th weekend. Stay tuned for all the news and information regarding the event, and find details about the event on the FRP website at racefrp.com.

For more information on any of the Formula Race Promotions promoted series, please visitwww.FormulaRacePromotions.com. For questions, comments or concerns, please feel free to reach out to Bob Wright RobertW@RaceFRP.com or Clay Hutchinson ClayH@RaceFRP.com. For media inquiries, please contact us via email at Media@RaceFRP.com.