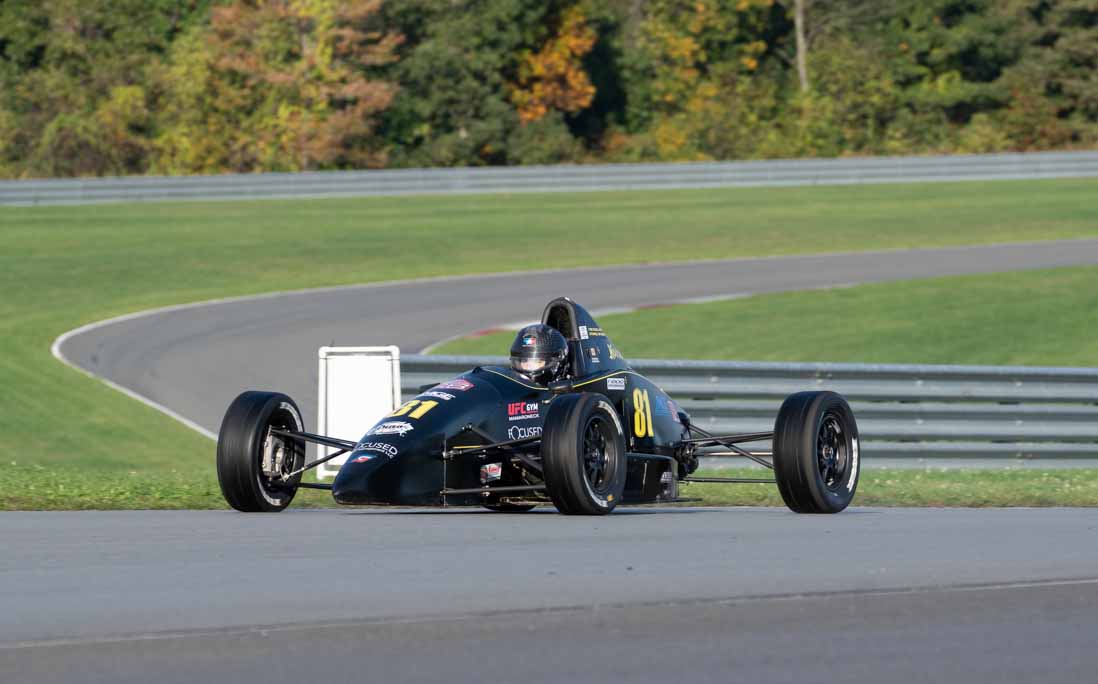 With eight event weekends now complete at some of the nation’s best and most prominent racing facilities, the 2021 Formula Race Promotions (FRP) has come to a close. Wrapping up this past weekend at the Pittsburgh International Race Complex (PittRace), FRP had another terrific weekend of competition crowing series champions as the focus shifts towards the 2022 edition of the program.

In a weekend that featured both wet and dry weather competition, FRP drivers were able to gain experience, knowledge, and develop skills needed to advance their careers once again. Sportsmanship continues to be at a high as competitors also get the best bank for their buck in open-wheel racing in North America.

"Following the 2020 Covid stricken season, we were not sure what to expect in 2021," explained Bob Wright. "Returning to the paddock as a series, we were met with teams and competitors that pushed us through the season and provided some great competition. Our partner series provided the support needed to put on great race weekends and the help and support from the tracks were second to none. Thank you to all our teams, drivers, families, partners, sponsors, and supporters for a solid 2021 season. 2022 is just around the corner."

Wright continued, “Congratulations to our winners this weekend as well as our 2021 champions. FRP has helped launch the careers of many and we hope that speaks volumes to the future competitors in our program. Might I add that we had 47 different drivers compete in the F1600 class which is an incredible stat and shows solid growth in the program.” 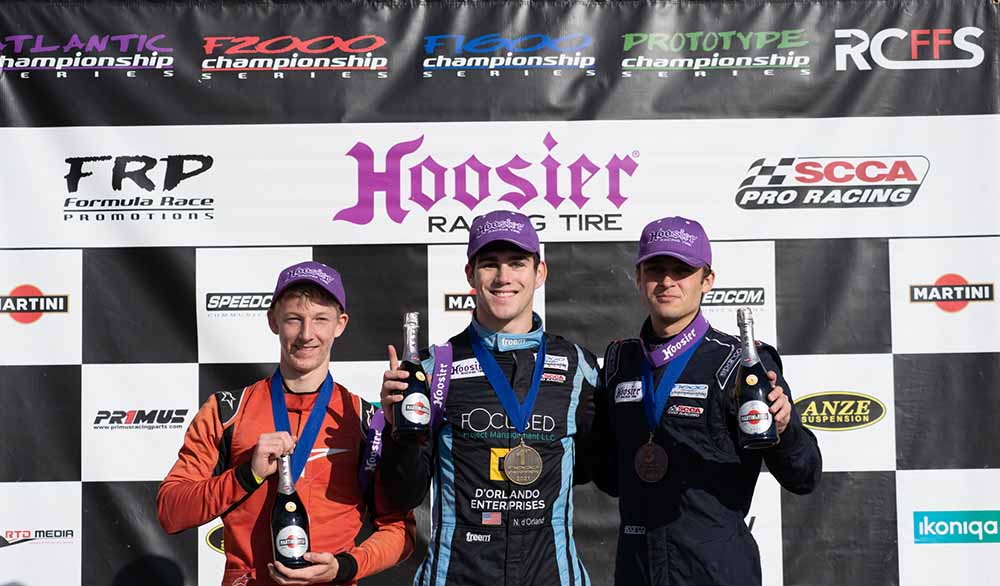 After a solid wet-weather qualifying performance from Nicholas d'Orlando to secure the F1600 pole position for the first wheel-to-wheel action of the weekend, the already ten-time winner in 2021 added his eleventh victory of the season, dominating the eleven-lap wet weather race taking the checkered flag, the fastest race lap, and the accompanying race two pole position.

Rounding out the podium was Exclusive Autosport’s Joey Brienza and Team Pelfrey’s Hugh Esterson as the duo had a fierce and exciting battle down to the wire swapping positions throughout the race. At the checker, it was Joey who squeezed past Hugh to take the second position. Right behind the battling duo, Thomas Schrage pushed his #01 Rice Race Prep entry to the fourth position just ahead of Jonathan Lee in fifth. In the Master class, it was Scott Rubenzer who turned his F1600 Master’s pole position into victory as he was 22 seconds ahead of his closest rival. Rob Albani was the best of the rest crossing the stripe in the second position while Bob Reid beat Steve Oseth and Theo Peppes to the third and final step on the podium.

With his race win and the championship now clinched, Nicholas d'Orlando would start the second wheel-to-wheel action of the weekend similar to the first. Rocketing away from the pole position in a damp but drying track, d'Orlando drove to his second win of the weekend en route to another fast lap honor. Schrage in the second position and Esterson back on the podium in third after the duo repeatedly swapped positions during the race while fourth place needed a photo finish review to determine that Brienza claimed the position spot by a hair over Will Holtz in fifth. Further back in the field, racing is just as intense, and FRP staff needed a second photo review to determine a race-long battle between Christopher Kierce and Will Velkoff. In the F1600 Masters class, Scott Rubenzer was the man of the second race scoring his second win in as many days ahead of John Dole and Sam Lockwood who rounded out the podium. Mike Scanlan pushed his #2 entry to a fourth-place result with Dave Petzko in fifth.

d’Orlando would start from the pole position for the third time on the weekend in race three as Jonathan Lee lined up to his outside while Burton Kyle August and Ax Kametches occupied row two behind him. d’Orlando completed only four race laps as he had an off-track excursion that would then collect John Dole and cause a rare red Flag situation. With Both drivers ok and their cars removed from the track, the race was on again with close competition between the five-car lead pack. At the checker, it was Schrage and Rice Race Prep taking the win to finish the season on a high as Joey Brienza crossed the line in second. Hugh Esterson earned the third and final step of the podium ahead of Ax Kametches putting four different teams in the top-four. Burton Kyle August crossed the line in fifth putting two Rice Race Prep machines in the top-five. Scott Rubenzer would breakthrough for another F1600 Masters victory holding Rob Albani at bay who finished second. Bob Reid, Sam Lockwood, and Mike Scanlan all finished their season in the top-five finishing third through fifth respectively. 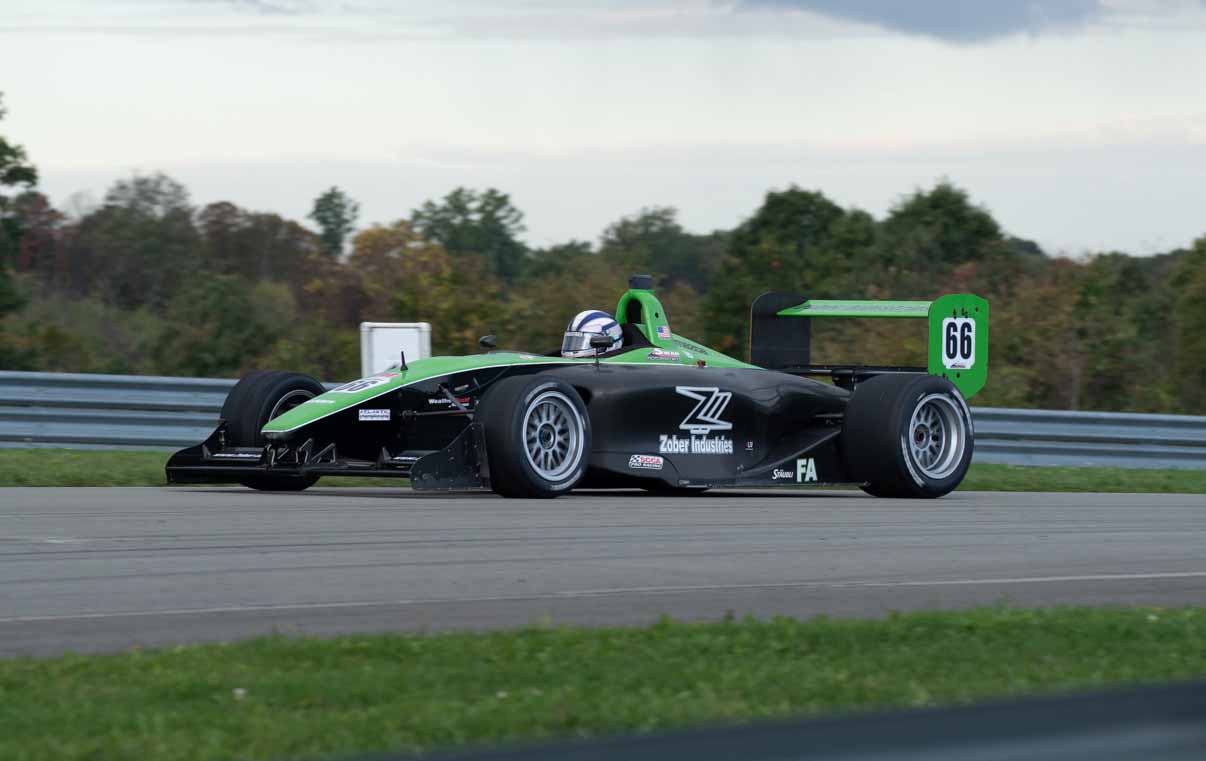 The Atlantic Series featured both the Open Spec class with 016 cars and the Restricted spec class with a variety of other models. It was Richard Zober who dominated the Open class to take top honors over Chris Ash, while Austin Hill topped the Atlantic Restricted class podium over Bob Corliss.

Bob Corliss returned to the top of the timesheets for the Atlantic Restricted class to take the win ahead of Austin Hill, and Richard Zober inherited the Atlantic Open class victory as the only driver to reach the checkered flag. 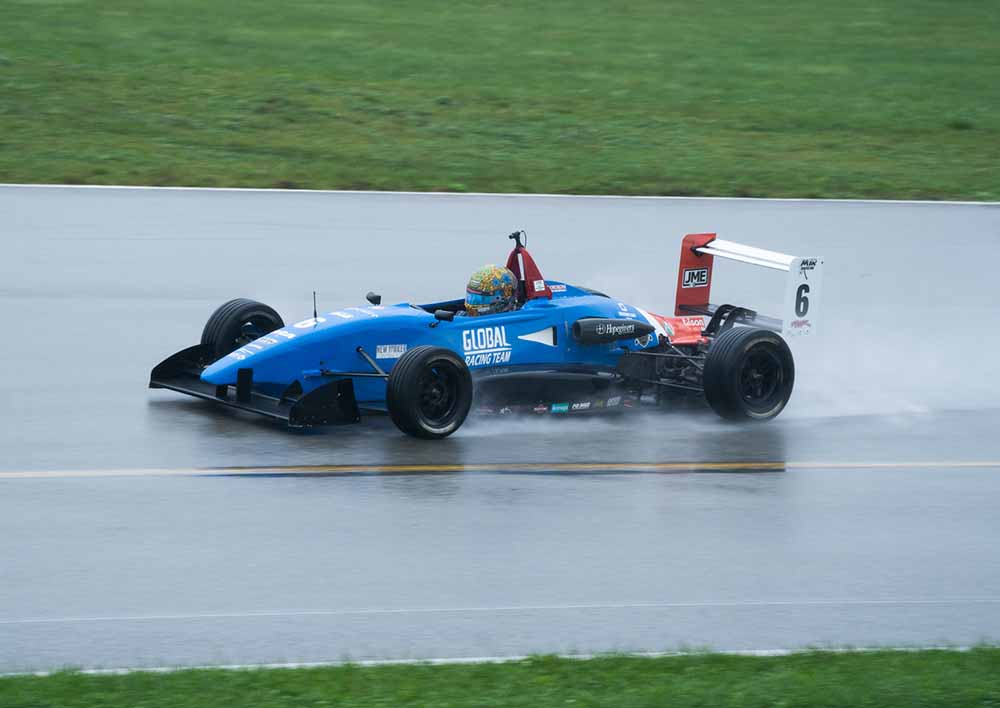 In 2021, FRP introduced into its F2000 Series the FC Classic class, allowing competitors using the SCCA Club Hoosier Bias tire spec to race with FRP but not for points or podium. In the first F2000 race of the weekend, it was Trent Walko who reigned supreme to take another win on the 2021 season as well as the fastest lap of the race. Crossing the line in the second position was Austin Hill with Robert Wright landing the third spot and Gabriele Jasper just missing the podium in 4th, producing a Van Diemen chassis sweep of the top 4 finishers.

For the F2000 race 2, FC Classic Competitor Vaughn Glace secured the pole position ahead of veteran Dave Weitzenhof, who returned to racing just six weeks after hip surgery and went on to cross the stipe ahead of the field. On the podium, it was Austin Hill on top joined by Nathan Byrd in second with Robert Wright again taking the third spot just ahead of Gabriele Jasper. Trent Walko spent three laps of the race in the pits but returned to the track to lay down a new track record and then beat his own record with a time of 1:39.182.  The top three finishers, Glace, Hill & Byrd, with a combined age less than many of their fellow competitors, all exclaimed what a great car and class the F2000 is and how they are looking forward to the competition in 2022.

“Thank you for a great season,” added Clay Hutchison. “We hate to see race season end, but it makes us excited and that much more motivated for our 2022 campaign. Stay tuned for our 2022 FRP schedule soon.”