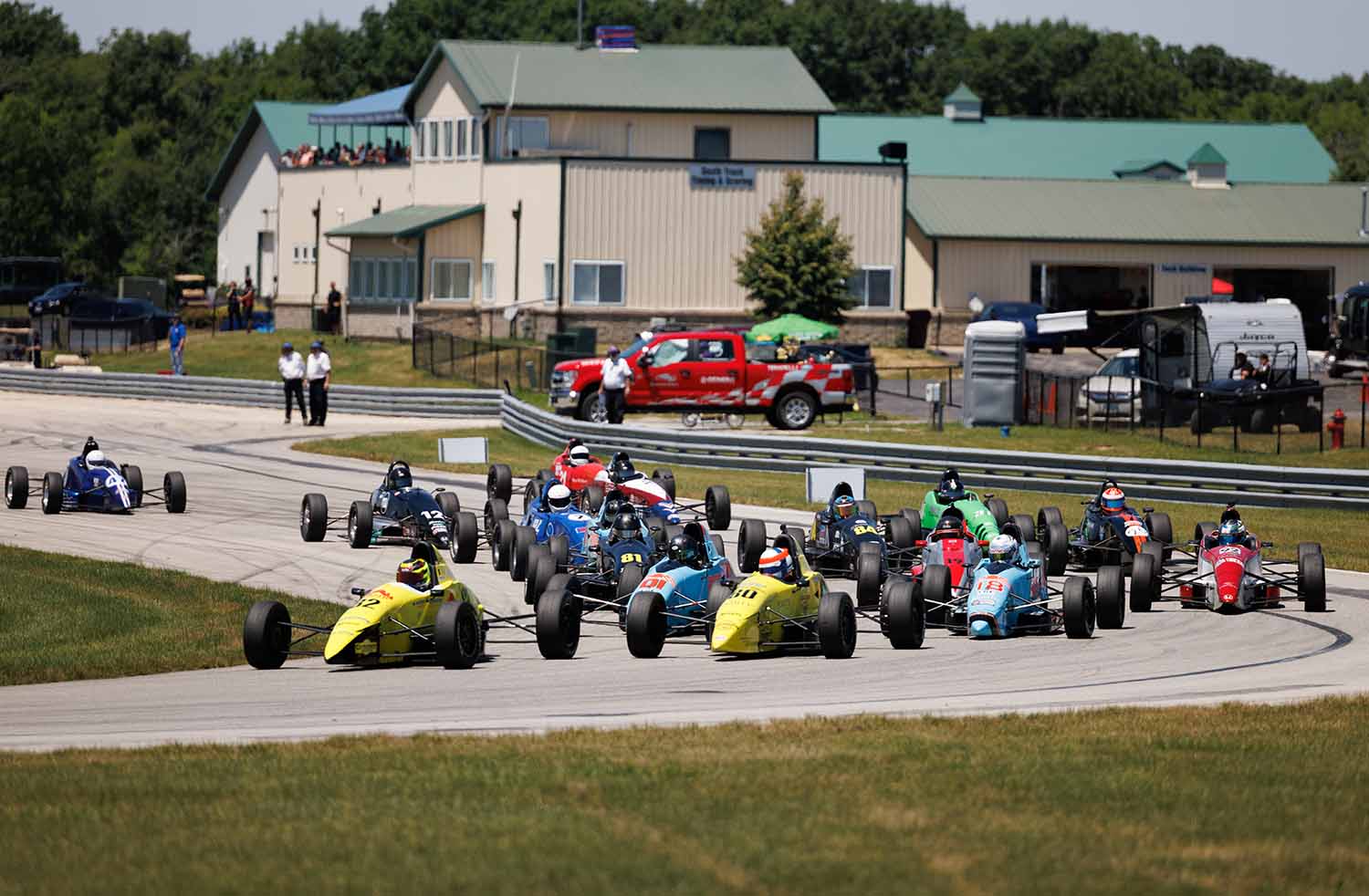 Deep into the heart of the 2022 racing season, Formula Race Promotions (FRP) was back in action this past weekend at the Autobahn Country Club in Joliet, Illinois. Known as a member-only track, FRP drivers invade the pristine facility once a year to leave their mark with some great wheel-to-wheel action, and the same could be said for this weekend’s event. With several storylines over the three-day event, rain would be the topic of discussion on Friday while the dominance of Rice Race Prep in the F1600 class took the headlines once racing began.

“We always love coming to Autobahn,” explained Bob Wright. “The facility is incredible, and it provides us with a great platform to showcase the skills of both our teams and competitors. We had a few hiccups on Friday due to the weather, but once the weekend came it was all about awesome racing, and close finishes, the two items that FRP have been built upon. Descending on the Joliet, Illinois facility over the past few seasons, the staff at Autobahn make FRP feel welcome and for that we are very thankful.”

As the end of the season draws closer, drivers have begun to shift their focus from race wins to points in their hopes to attain the elusive FRP Championships. With only a handful of weekends remaining, it is anybody’s title in many of FRP’s most competitive classes 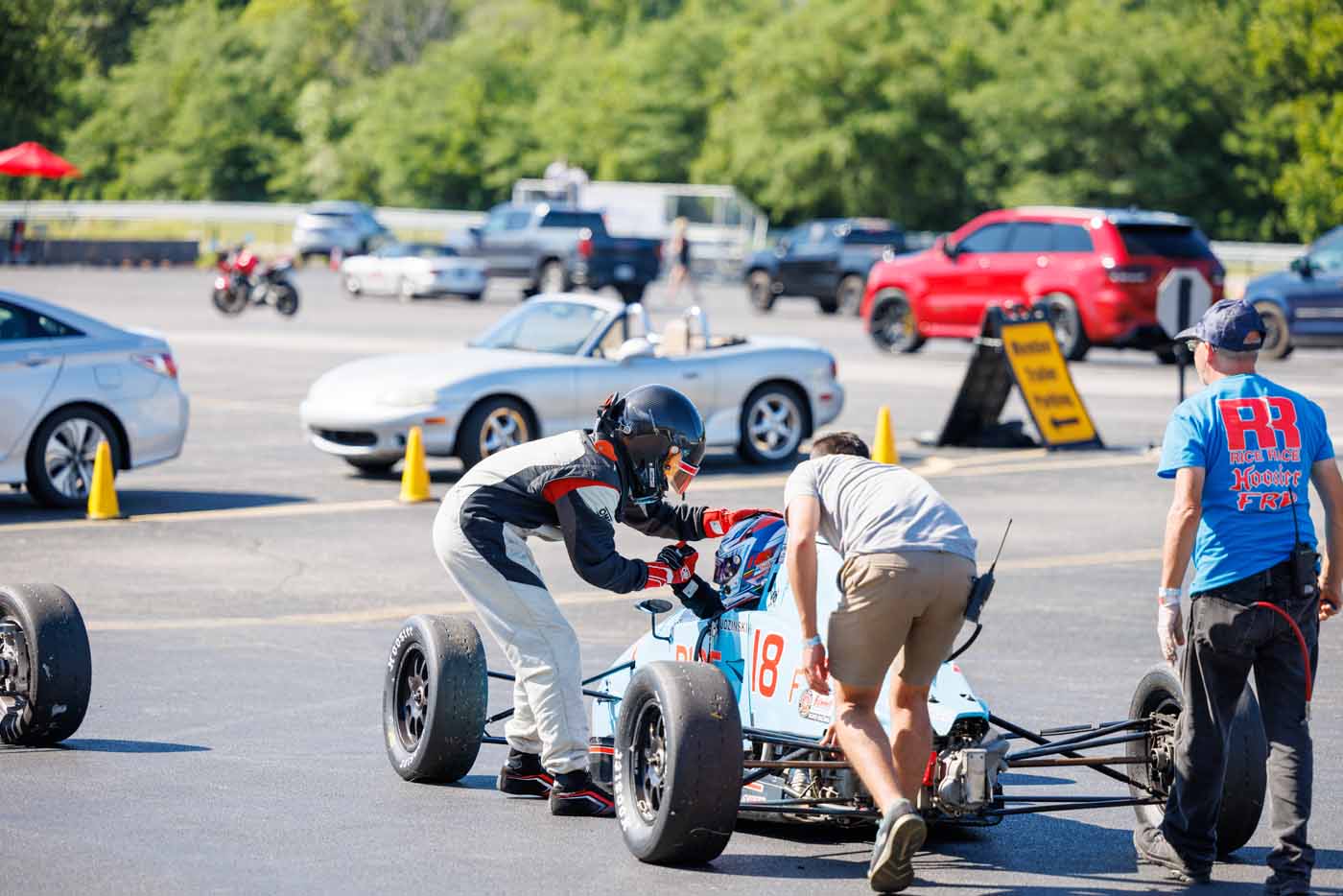 Climbing from his P4 starting position, Rice Race Prep’s Elliot Budzinski was the man to beat in the first F1600 race of the weekend. With numerous back and forth positions and lead changes in the top group, Eliott Budzinski in the Rice Race Prep #18 worked his way to the front of the field to score the race win. Thomas Schrage made it a Rice Team 1-2 finish as he climbed from fifth to second before the checkered flag flew. Jack Sullivan maintained his P3 starting position to stand on the podium in third ahead of second place qualifier Hugh Esterson who fell to fourth in the race. Joey Brienza, racing out of the Exclusive Autosport camp, soldiered his way forward to slide his way into the top-five with a fifth place result. It was Scott Rubenzer who took top honors in the Masters class adding another win to his extensive resume as he outpaced Bob Reid to score the victory. Mike Scanlan would join Rubenzer and Reid on the podium in third, just ahead of Phil Kingham and Dave Petzko in fourth and fifth respectively.

With the fastest lap from race one setting the grid for race two, it was Sullivan who would start race two from the pole position next to Thomas Schrage in second. Hugh Esterson and Elliot Budzinski would occupy row two ahead of Brienza and Nolan Allaer in row three. Bob Reid earned the pole position in F1600 Masters ahead of Rubenzer, Scanlan, Kingham, and Petzko.

Rice Team Schrage & Budzinski settled into the 1-2 spot early on, and a five competitor ten lap battle for positions three to five allowed the two leaders to decisively pull away from the field to race between themselves. Sullivan’s contact with Esterson on lap 13 broke up the second grouping, ended Sullivan’s race and knocked Esterson from third to his ninth place finish. Ayrton Houk joined the podium in third with Nolan Allaer and Timothy Steele finishing fourth and fifth 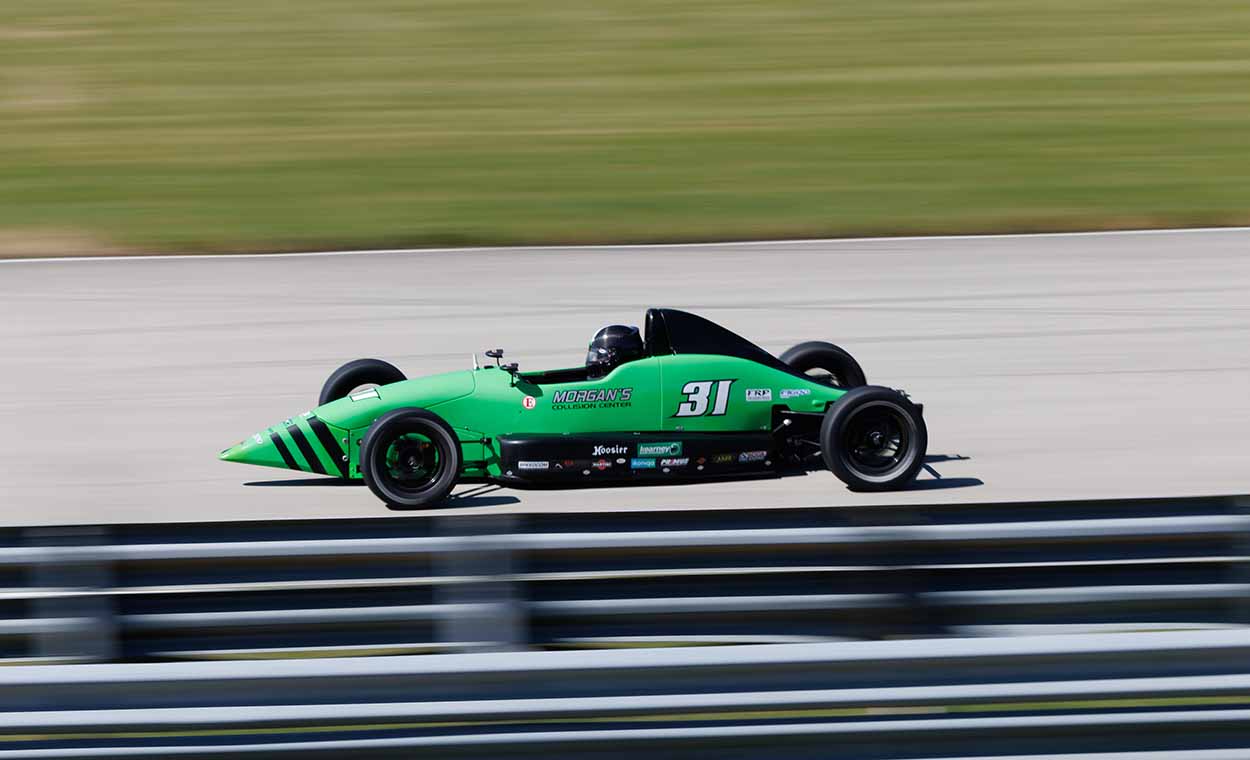 On the Masters side of the program, it was Rubenzer who notched another win as he was once again joined on the podium by Bob Reid and Mike Scanlan. Phil Kinghan maintained his position in the top-five finishing fourth as Robert Stowell made his first appearance in the top-five in P5.

The all green flag eighteen-lap race three was some of the most dynamic racing of the season, with plenty of position changes among the six competitor lead group. Ayrton dropped out after lap twelve with mechanical trouble, and with five laps to go, the field was led by Schrage, Budzinski and Esterson. With three laps to go, Esterson had claimed the lead, and continued leading till out of sight on the white flag lap. At the checker, it would be the Rice Team Schrage & Budzinski for their third 1-2 finish of the weekend, Team Pelfrey’s Hugh Esterson on the podium for third, with Exclusive’s Joey Brienze in fourth and Pelfrey driver Nolan Allaer in fifth.

“Even though I came in third, it was possibly the best race of season” exclaimed Hugh Esterson, “congratulation to Thomas, he made a great move on the last lap and got me.”

Scott Rubenzer made it a perfect weekend in F1600 Masters taking his third win of the weekend as he swept the event. Bob Reid and Mike Scanlan would once again find their way to the podium as Kingham and Petzko finished fourth and fifth respectively. 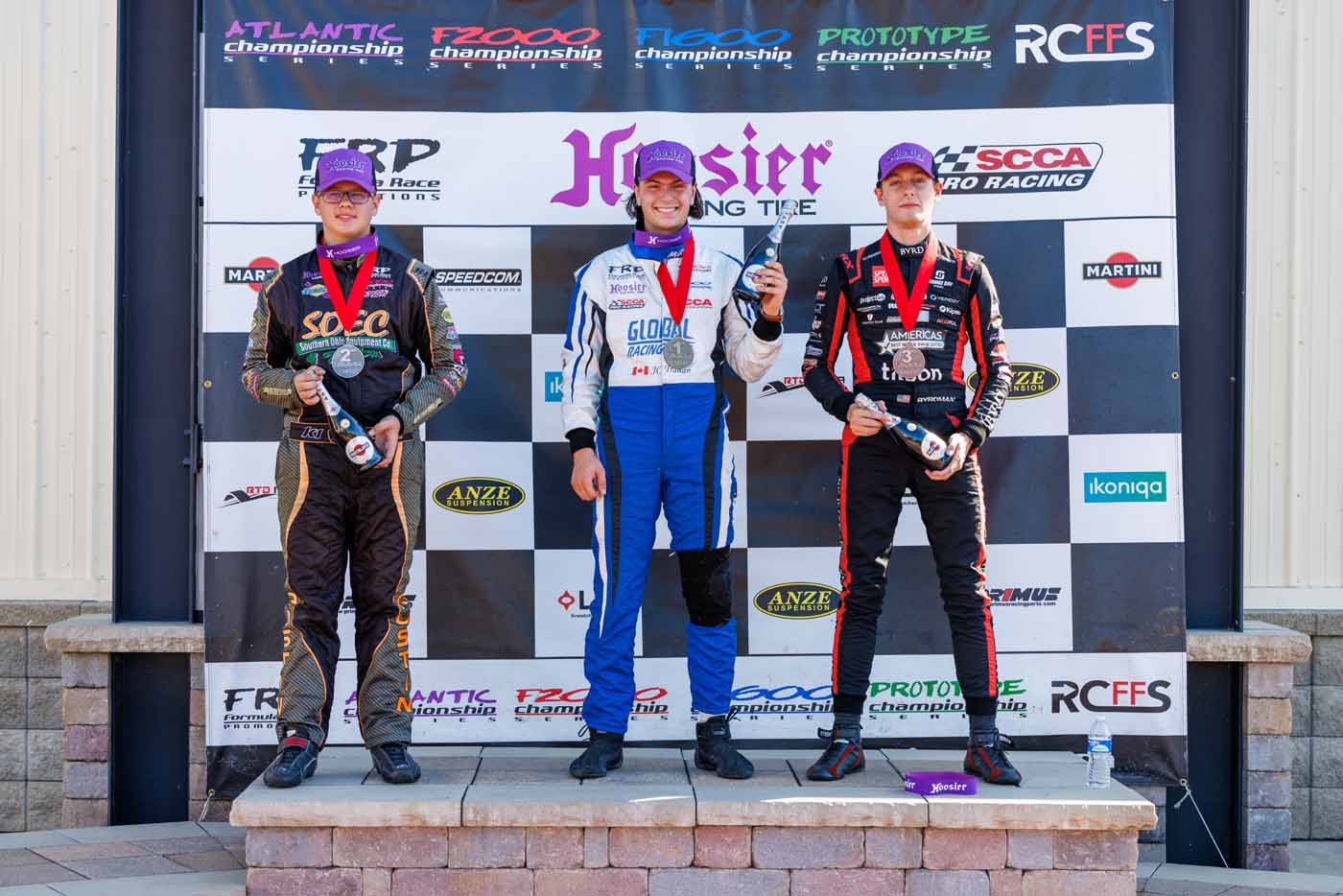 JC Trahan and his Global Racing Team #12 entry was able to earn their first win of the weekend converting their pole position into a race win in the first F2000 action of the weekend. Austin Hill kept Trahan honest finishing half a second behind the winner as they ran away from the field and secured the top two steps on the podium. Nathan Byrd rebounded from a qualifying issue to find himself in third ahead of Robert Wright who maintained his starting position to finish fourth and Dave Weitzenhof in the fifth position.

Making it two-for-two on the weekend and sweeping the festivities at the Autobahn Country Club, JC Trahan turned his second pole position into his second win in as many days. Dominating the weekend, Trahan secured the fastest lap of Sunday’s main event enroute to the top step of the podium for himself and his Global Racing Team. Nathan Byrd was the best of the rest over the 20-lap main event to finish second, just ahead of Robert Wright who secured the second fastest lap of the race. As the top three celebrated on the podium, Dave Weitzenhof and JT Novosieski, who faded late in the race due to handling issues, were on the outside looking in crossing the line in P4 and P5.  Austin Hill bowed out with a mechanical issue on the pace lap 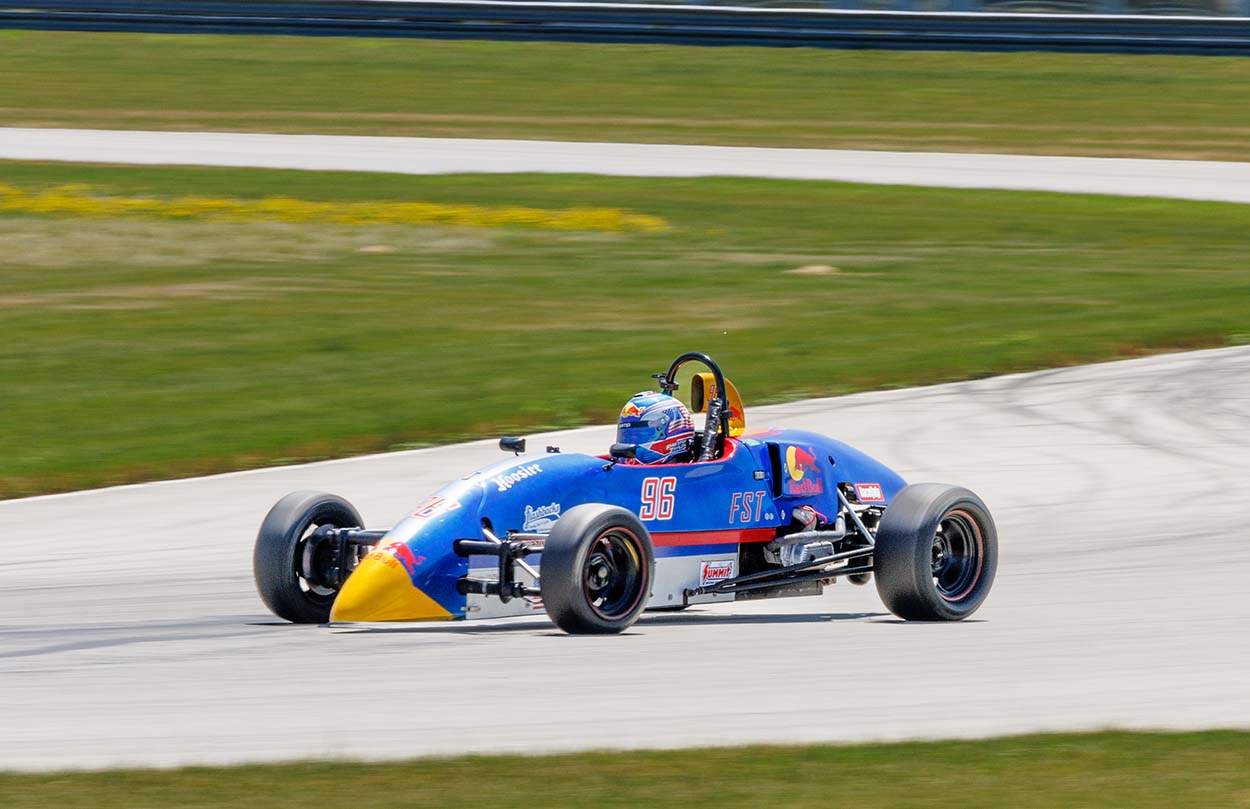 Starting from the outside of the front row, second place qualifier Preston Taylor wasted little time making his way to the front to score the first Formula First race win of the weekend. Matthew Seim, who failed to qualify inside the top-five, drove forward to stand on the second step of the podium as Matt Clark maintained his third-place qualifying performance to finish third. Pole position winner Doug Seim fell to fourth throughout the 13-lap race as he finished just ahead of James Monaghan who managed to maintain his position in the top-five and come home fifth.

Taking advantage of his pole position, Preston Taylor bested the rest of the Formula First competitors to earn his second victory in as many days. Cementing his position at the front of the field over the 13-lap race, Taylor was pressured by Doug Seim who scored the fastest lap of the race to finish second, and Matthew Seim who crossed the line in third. With Siems claiming 66% of the podium positions available, it was Taylor who climbed the highest to the top step. Matt Clark narrowly missed his chance to stand on the blocks coming home in fourth ahead of James Monaghan as he rounded out the top-five. 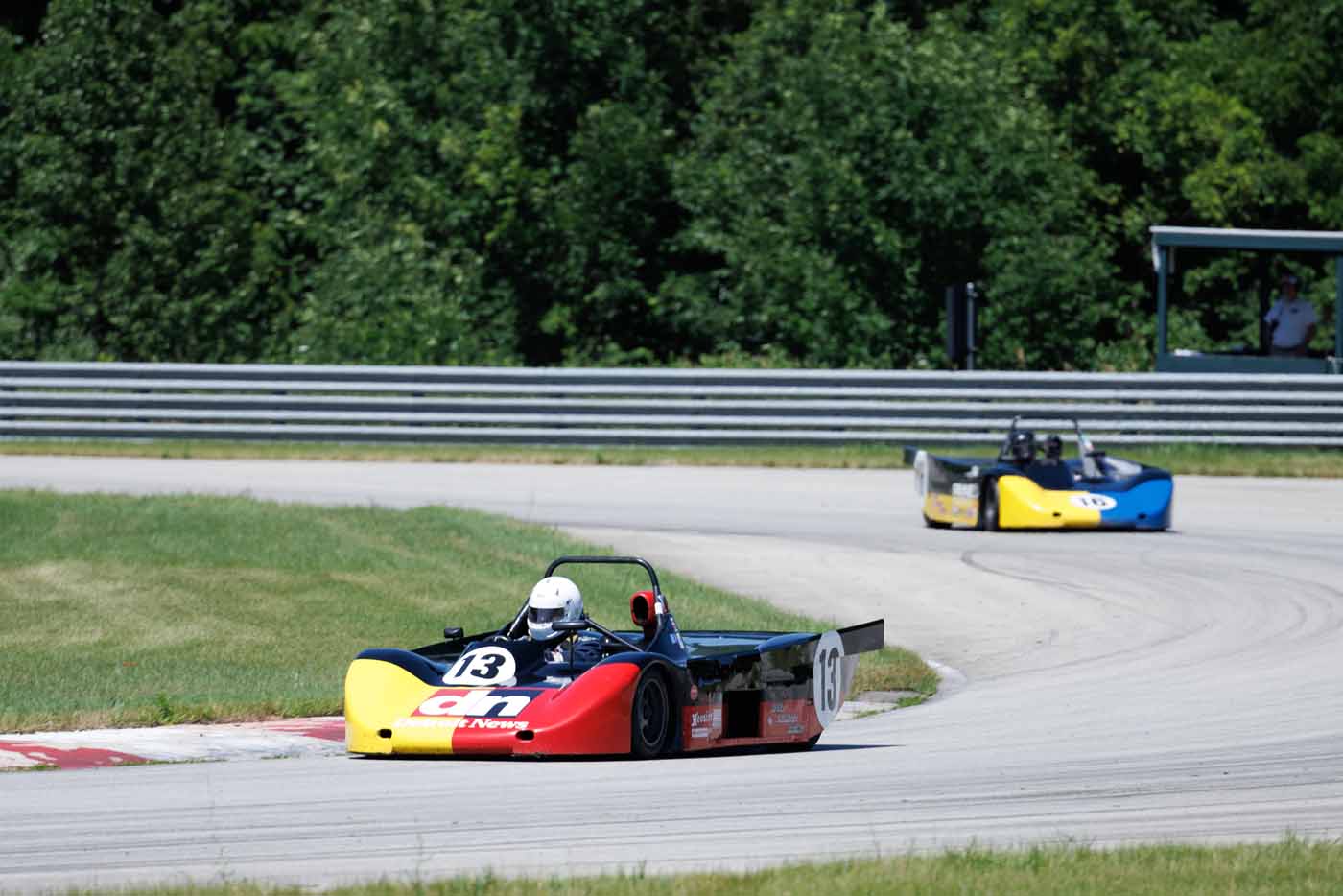 Henry Payne V beat Henry Payne in the first S2000 race of the weekend as the two drivers were the class of the field. Battling for the win throughout the 19-lap race, the Paynes finished just over one second apart and well ahead of the third-place finisher of Samuel Payne to make it a trio of Paynes on the podium.

It was a flip-flop of the top two positions from Saturday’s racing action as Henry Payne bested Henry Payne V for the second S2000 win of the weekend. Samuel Payne joined the two Henrys on the podium once again to make it an all-Payne podium for two consecutive days.

The next event for the Formula Race Promotions program will be for the Atlantic competitors only at the famed Road America over the July 30-31 weekend. 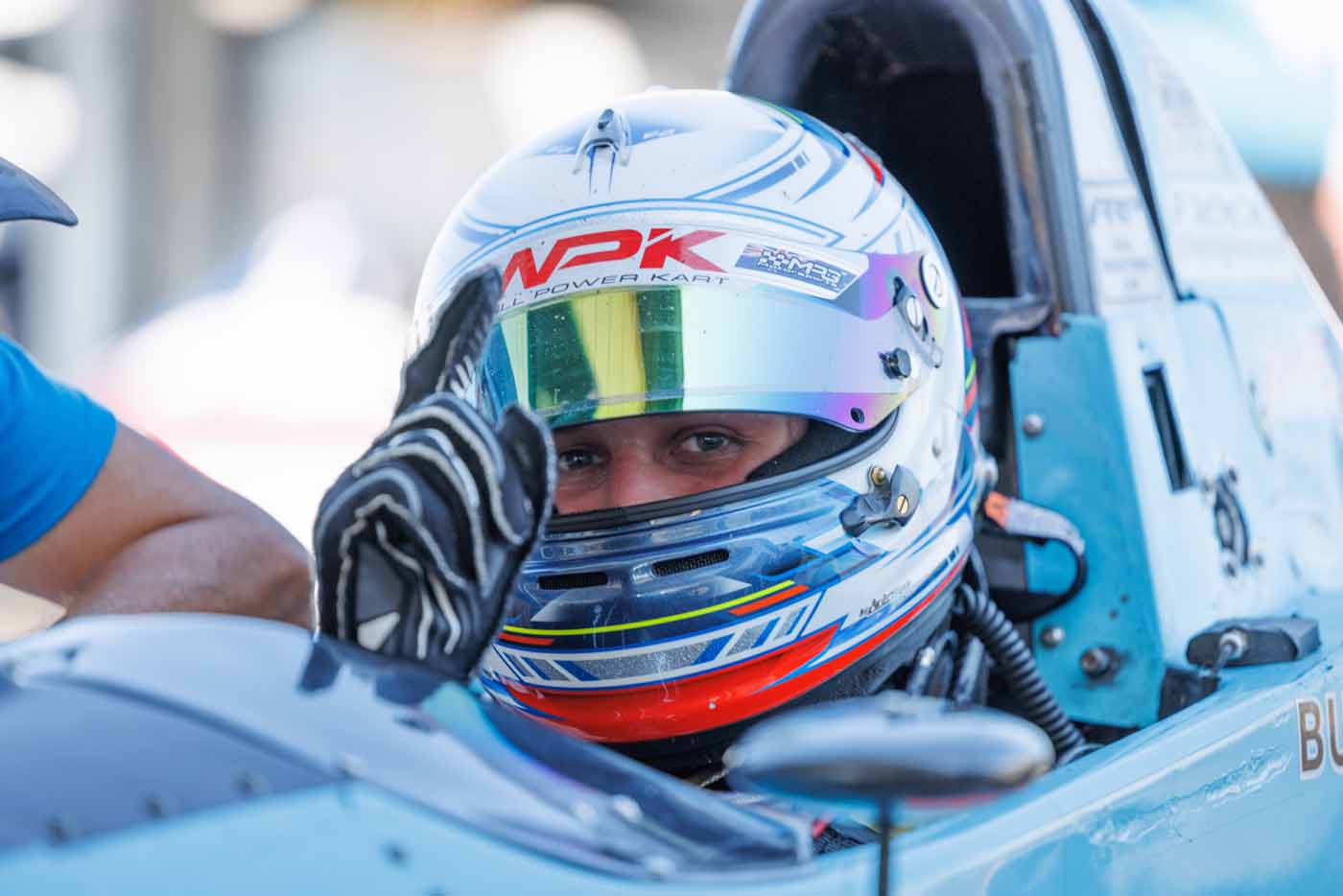