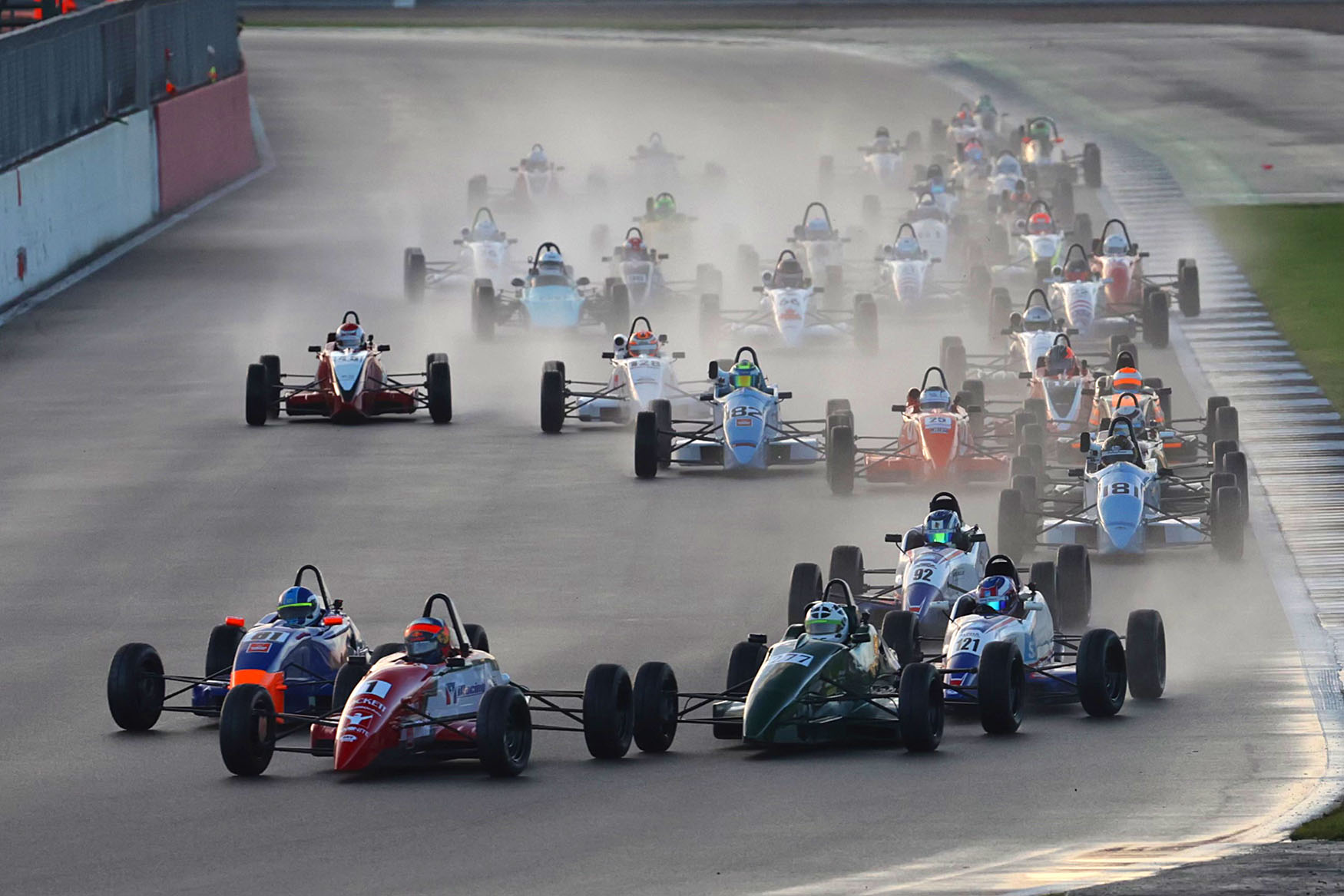 A characteristically dramatic Walter Hayes Trophy Grand Final this afternoon at Silverstone ended with Max Esterson hailed as the victor for a second successive year. Unfortunately for him, the race stewards later assessed a 4.5-second penalty which relegated him to fifth position and handed top honors — for a record-breaking fourth time — to Englishman Joey Foster (Don Hardman Racing Firman RFR20). The results, however, will remain provisional due to the stewards’ decision having been appealed.

After winning the prestigious event last year in Team USA Scholarship colors, Esterson, from New York, N.Y., and his Ammonite Motorsport Ray GR18 fought an intense 15-lap battle to fend off Foster and Michael Eastwell (KMR Spectrum), only to be later penalized for an incident with Eastwood’s teammate, Tom Mills, on lap eight at Luffield corner. Mills recovered from a gravelly excursion to finish fifth on the road, although he gained one position due to Esterson’s penalty.

Elliott Budzinski, from Ann Arbor, Mich., drove an impressive race to finish ninth in the Grand Final, having started 17th in just his fifth-ever car race event. Thomas Schrage, from Bethel, Ohio, recovered to 17th after being involved in an early incident. The third Team USA Scholarship representative, William Ferguson, from Pacifica, Calif., was unfortunately involved in a skirmish while running a strong fifth in his earlier Semi Final which prevented him from progressing to the Grand Final.

Overnight rain which continued into the morning led the organizing Historic Sports Car Club to shorten the two Semi Final races from 12 laps to 10 laps apiece, although track conditions were similar to Saturday when the first group lined up with Budzinski 10th on the starting grid. He made up places regularly in the opening stages, rising to fifth inside the first three laps before piling the pressure on veteran Formula Ford campaigner Chris Middlehurst and eventually making the pass on lap seven with a nice move at Becketts. Unfortunately, next time around, multi-time Historic Formula Ford champion Cameron Jackson left his braking a fraction too late at Brooklands and made contact with the rear of Budzinski’s Ray GR22, causing both to spin and lose several positions.

“The Semi was great right up to the very end,” said Budzinski. “I had a really good start and made my way to fourth by lap six, catching third. Still a lot of positives to take from the race. We’ll be starting 15th in the Grand Final and have shown that we can make up a lot of places.”

Ferguson was out of luck in his Semi Final.

Semi Final 2 saw Ferguson on the inside of row three of the grid with Schrage a little farther back in 12th. After an early red flag and complete restart due to a multi-car melee even before the first corner, Ferguson maintained fifth place until being tapped into a spin which dropped him to the back of the 36-field.

“Well, shoot. Such an unfortunate way to end my time over here in the UK,” said Ferguson, who finished 25th. “After getting a good launch and being in fifth I was spun around on the exit of Becketts. I lost a lot of time and wasn’t able to make it far enough up the field to be in the final. I’ll still take everything I can from this weekend to learn and keep moving forward.”

Schrage lost a position on the opening lap and was further hindered by another safety car interruption but managed to work his way up to eighth at the finish after posting the third fastest race lap.

“My Semi-Final didn’t pan out to exactly what I needed for a top starting spot in the Grand Final,” he related. “Unfortunately, the gap created under the safety car didn’t allow me to catch the front group, but an eighth-place finish is just enough to keep in the fight for what is looking another thriller in the Grand Final.”

Intense action on the first lap of the Grand Final.

A penalty levied on other driver resulted in Schrage lining up 14th for the Final with Budzinski three places farther back on the grid. Both immediately began to move forward in tandem, although Schrage’s progress was halted on the third lap when a hit from behind at Brooklands resulted in his car leaping into the air.

“It was spectacular to watch,” said a close-following Budzinski, who narrowly escaped the incident and continued in 12th.

“I thought I was going over,” added Schrage.

While Schrage was able to continue, a huge pack of cars disputed what was to become seventh place for the majority of the race, with Budzinski finally emerging from the chaos to finish ninth.

“Wow, that was incredible,” declared Budzinski. “Starting 17th I wasn’t sure what to expect. Given how quick we’ve been through the week I knew it would be possible to move up, but that had to have been the most fun, scary, sketchy, gloves-off and respectful racing I’ve ever done. To come away with ninth place is something I’m proud of and am happy to end off this amazing journey. I cannot express thanks enough to Jeremy Shaw, all the Team USA supporters, and the entire Ammonite Motorsport crew. I’m sad to be leaving but enormously grateful for this opportunity I’ve been given. It’s time to start thinking about the future now!”

After recovering from his wild ride in 27th, Schrage impressively made up 10 places in the closing laps.

“The results weren’t exactly what we would have liked but we had the pace to compete up front all weekend and never gave up,” said Schrage. “My Grand Final was off to a great start, picking up four spots in the opening laps, but as I made a move on lap four, I was driven into by another car and fell a long way back. I continued to push in recovery mode until finishing in 17th overall.

“I have to thank Jeremy Shaw, the Team USA Scholarship program and all their supporters. Without everyone, I would have never gained this life changing experience and development in my driving. Thanks to the Ammonite Motorsport crew and Andy Low for putting up with us these last few weeks, they made this trip a ton of fun.”

All of today’s races can be reviewed on the live stream here: https://www.youtube.com/watch?v=JRoKbZU1cxE.