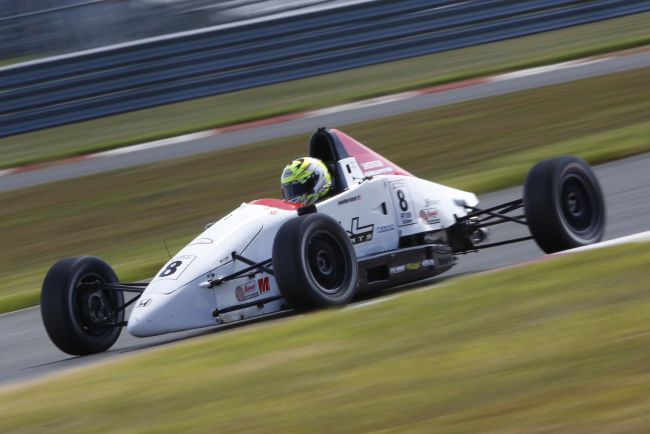 Jonathan Kotyk looked to be out of contention in race two, but it turned that he was playing the long, and at the line he was victorious once again! Sunny skies are now present here at NJMP, the adverse conditions are behind us now. Josh Green leads the field to the flag, but he’s asleep, and the second place starter Jonathan Kotyk gets the jump taking the lead into turn one. Bryce Aron follows into second, Green falls to fourth as Scaler also gets by to take the third spot.

The top four come to the line to complete the first lap, they jockey for position, Kotyk somehow manages to stay out front. Scaler goes to second, Green to third. Kotyk is the loser and falls to fourth. Half way through the lap, Scaler takes the lead from Aron, Green hangs in third, but Kotyk is falling off the back of the pack. It’s not clear if he’s got a problem or if there was a mistake made.

Sixteen laps remain, Aron is still out front. Green has moved past Scaler and into the second spot. Kotyk remains in fourth, he’s hanging in there, potentially looking for fast laps in order to gain bonus points and get the top starting spot for race three.

At the front, Aron and Scaler have gotten away from Green and Kotyk. There’s a three second gap. Kotyk is trailing off the back of Green, his lap times are fairly inconsistent. Burton August is fifth overall, Charles Anti runs in sixth. Twelve laps remain.

Bob Reid gets by Albani to take over the master’s lead. They are seventh and eighth overall. The gap to sixth place Charles Anti is quite large, Anti runs without concern for challenges from behind.

The race for the lead is getting tight again. There are nine laps left. Green leads, Aron is second, Scaler third, and Kotyk has caught back up and holds fourth. On the back half of the course, Scaler gets by Aron. Kotyk now moved up to third, the top four are evenly spaced and covered by about one second. The race for the master’s win remains intense too, Albani goes back by Reid. They two are going at it hammer and tong.

They cross the line to make it seven laps to run. Kotyk goes from first to third, but Green goes back by Kotyk off the exit of turn two. Kotyk lost his momentum, Aron and Scaler get backed up behind him. Green gets a bit of gap.

Five laps left to run, Kotyk leads. Aron has a try on Green into turn one, he can’t get it done. Out of turn three, Kotyk has some sort of issue, he’s moving slowly and Green drives by. Aron and Scaler again get backed up behind Kotyk. Reid and Albani continue to trade places for the top master’s spot, right now Reid owns it.

The lap counter shows three laps, Green again retakes the lead. Kotyk falls in behind, Aron is third, and Scaler fourth. The top four momentarily stay stagnant in their position. As the laps count down, track position will play a large part who in who has the last laugh come the checkered flag.

As they come to the white flag, it’s now Green at the front, Kotyk is second, and Aron follows. Kotyk goes by Green into turn one. On the back half of the track, Kotyk gets sideways, Green gets bogged down behind him, Aron goes by into second. To the checkered flag, Kotyk wins again! Arron is second, Green comes home third, Scaler is fourth, and August is fifth. Reid brings home his second win of the day in master’s, Albani is second, Steve Oseth is third.

It should be noted that this makes Jonathan Kotyk the official 2019 F1600 Championship Series champion!