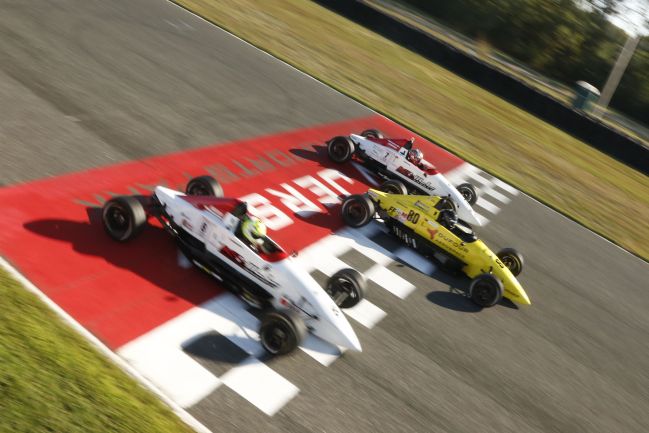 The top three crossed the line nearly simulataneously, Josh Green was half a nose ahead, but a photo finished was used to determine second place position Jonathan Kotyk and third place Bryce Aron.

The results of race two unofficially closed the deal for Jonathan Kotyk, he will be crowned the 2019 champion. That won’t deter the F1600 Championship Drivers from racing hard though. Kotyk sits on pole, teammate Bryce Aron is on outside pole. Josh Green starts third, Alex Scaler is fourth, Burton August fifth, and Mike Scanlan lines up sixth.

They head to the starters station looking rather orderly. The two K-Hill entries of Kotyk and Aron don’t get a great start, Josh Green heads into the lead. Kotyk is second, Aron third, Scaler fourth, and August fifth.

In master’s, Rob Albani leads, but he’s hounded by Charles Finelli. Bob Reid is third in the category, the drivers comprise seventh through ninth respectively.

Fifteen laps remain, the race at the front is a pack five. Green still leads, Kotyk is second, Aron third, Scaler fourth, and August is doing a good job of hanging on to the pack. Meanwhile, Finelli and Albani continue to race on, they’ve swapped positions at the top spot of the master’s category a few times now. Bob Reid lurks less than a second back.

The leaders cross the start line, there are ten laps to go. Not much has changed at the front, the top four hold their spots from the previous order. Burton August has lost touch with the lead four, he runs safely in fifth but won’t be a factor in the race for the win. Charles Anti is a distant sixth, and Charles Finelli has managed to secure his seventh place spot. Finelli leads master’s, Albani is second, Reid third, and Oseth fourth.

At the front, Green still leads, but Aron takes over second from Kotyk. Scaler is in third but trails a tad off the top three. The race for master’s race continues to be tight, Oseth, Reid, and Albani have swapped positions multiple times. Interestingly, these three guys are starting to make inroads on the once distant Finelli, but there are only four laps left so they may not catch him in time.

Two laps to run, Green still leads Aron, then Kotyk. Scaler is out of the picture but solidly in fourth. Then it’s August, Anti, and Finelli filling out fifth through seventh. Finelli leads master’s, Reid and Oseth are hammering on each other for second, it’s Reid with the advantage right now. Albani is a distant fourth and runs tenth overall.

The leaders come to the start line, the white flag is waving. There’s no change in order for the moment, but they are looking eager. Aron hounds Green, on the back half of the course they go side by side. Aron gets it done! Just a few more turns left, Aron leads to the start finish line, but Aron has scrubbed off some speed, the top three bunch and then fan out as they head to the line. Green, Aron, and Kotyk are three wide at the line, this race will be called on photo finish! The master’s drive to line, Finelli has fallen into the clutches of Oseth and Reid, he get’s defensive, but Oseth goes by to win master’s! Finelli is second, Reid is third.