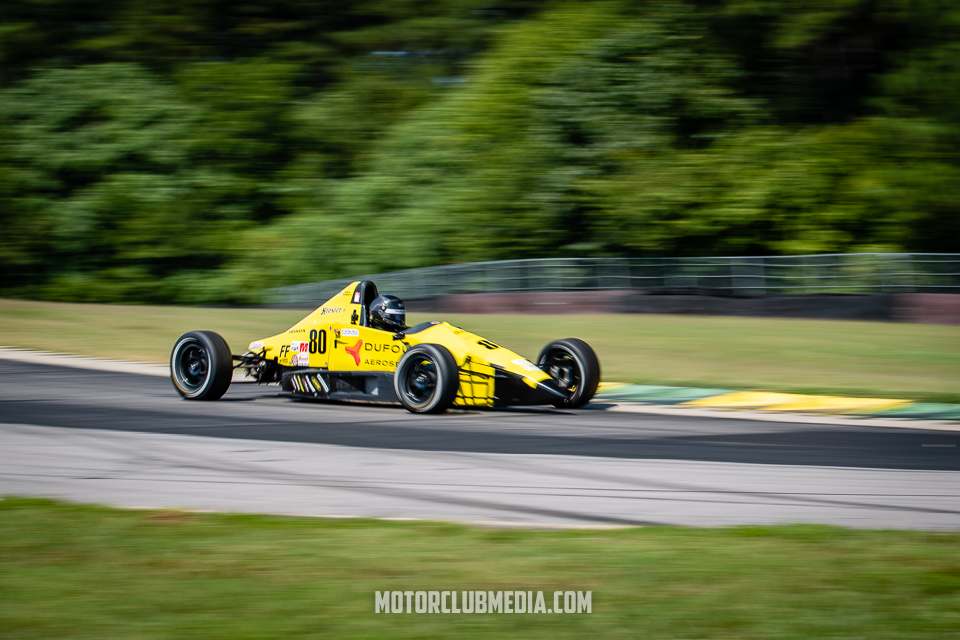 On pole position for race three is Alex Scaler based on having run the fastest outright lap in race two. Chris Horan put his privateer entered Van Diemen in the second spot, and Bryce Aron in the third spot.

The green flew and it was Scaler cleanly down the inside of turn four to secure the top spot. Kotyk managed to get into second, Chris Horan now in third. A lead pack is already forming, but there are at least nine guys still in the hunt.

At the end of the third lap Kotyk got himself in trouble and fell to sixth. Scaler starting to gap the field, he’s got well over a full second in hand. Chris Horan holds third, a pack of Pelfrey cars breathes down his neck. Less than four seconds separates the top ten cars, the pack is madness, they are two wide on four distinct instances.

Fourteen laps remain, Scaler’s lead grows to it’s the largest amount yet, now nearly two full seconds. From second place through eleventh they are only separated by five seconds. The drivers run nose to tail and often side by side. Horan holds second, Ori third, Green fourth, Kotyk fifth, and Aron sixth.

A big shake up in the front with just thirteen laps to go. Kotyk capitalizes on the fighting of the drivers in front, he is now up to second. Green is third, Horan relegated to fourth, Ori in fifth. The gap to Scaler falls a few tenths but it’s still one and a half seconds.

The battle for second rages, but the pack has broken up. There are two distinct packs with the seventh place driver, Christian Lall Dass heading the second. At the front, the first pack now has Green in second, but the gap to Scaler continues to shrink. Ten laps remain.

First through third run nose to tail now, in fact, Kotyk is back at the point. Scaler to second, and Green in third. Horan has fallen back, Ori follows in fifth, and Aron is right there in sixth.

Eight laps left to travel. The top three have gapped fourth through sixth. Both groups are infighting and the fastest laps are being run by the mid pack competitors. Dexter Czuba in the seventh spot begins catching the group ahead, he’s regularly running more than a second faster per lap than the leaders.

With six laps left, Josh Green takes the lead, Kotyk is in second, Scaler ever present in third. Less than a half second covers the three. In the battle for fourth, Czuba set the fastest lap of the race thus far and leap frogs all three competitors in just a single lap. A spectacular change of order! It’s Ori, Aron, and Horan now filling fifth through seventh.

This time by, it’s Kotyk back in the lead, Scaler in second but fighting with Green. Czuba continues his march, he has reached the top three and brought fifth through seventh with him. The pack merges into one again.

With two to go the top seven run nose to tail, they are separated by just one and a half seconds. Into turn four, Scaler is outside Kotyk. He can’t make it work. Green gets a run on Scaler into turn six, he takes the second position.

The white flag flew, it’s the last lap, into turn four again Scaler who regained second from Green now makes the move on the leading Kotyk. Kotyk and Scaler go side by side into turn four. They enter turn five still side by side. Disaster! They lock wheels, Scaler goes airborne! Kotyk spins! Green, Czuba, Aron, and Ori get through filling first through forth, they continue to the finish in that order. Kotyk recovers to fifth, Christian Lall Dass to sixth. Scaler retired after the contact. Chris Horan had to take evasive action to miss the contact and was relegated to eleventh.