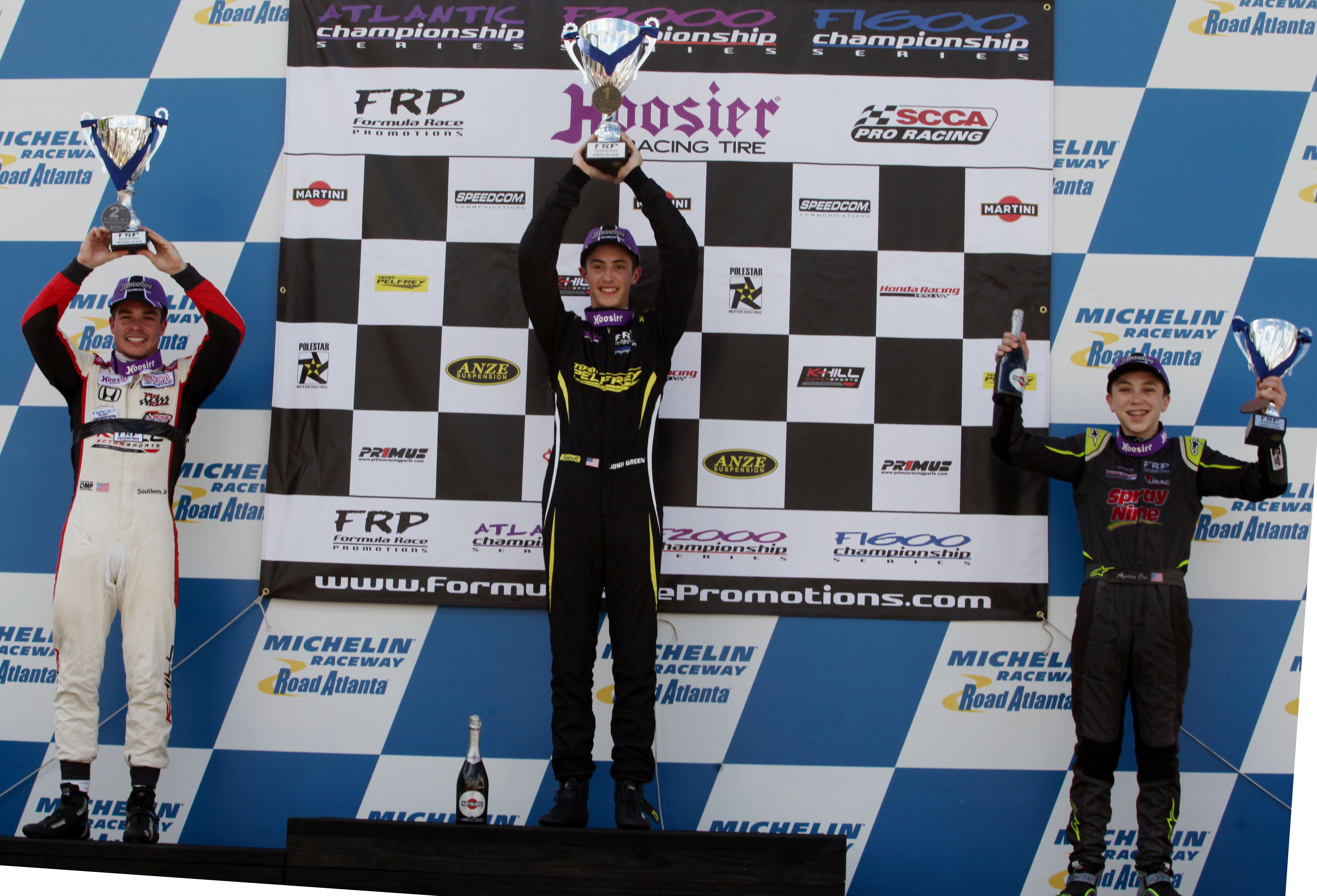 The 1600 competitors decided to use their final Friday session for their first of three races. To set the grid, lap times from Thursdays practice times were coalited and order was based off best lap. Certainly, this was a tough situation for drivers will less than desirable luck during the practice day, but given the dire weather conditions Friday morning this was the preferable choice.

On this day, the weather did not hesitate to be cruel. Just minutes before the 1600 race was to start another heavy downpour soaked the facilities once again. The race crews responded by installing rain tires in a hurry.  The field, 18 deep, headed trackside all fit with wet weather tires and rain lights glowing.

On pole saw Zachery Vanier in his Britain West Motorsport entry, alongside him was Misha Goikhberg in the Rice Race Prep Mygale. One row two Bryce Aron held third spot with Josh Green alongside. Fifth place was held by Ayrton Ori and sixth by Scott Rubenzer the leading masters class entry.

As the drivers went past on the formation lap the rain seemingly intensified and as the field’s grouping tightened through turns 10a and 10b and the green flag was set to wave. The next time by it was Josh Green in the Pelfrey entry taking the lead, certainly an impressive start from fourth. He was followed by Goikhberg, Vanier, and Kotyk who had improved from his seventh starting spot. Unfortunately the course went full yellow as a car was mired just off track after only a single flying lap once again stacking the field.

As track cleanup commenced the rain slowed again and some of the wetter spots on track began to show a clearer racing surface. The pace car lights then turned off and the #80 of Josh Green controlled the field patiently maximizing his run to the green flag. Goikhberg in the #13 continued to push and was able to hold Green to a one second advantage.

As the group started to fracture some, Vanier in third and Kotyk in fourth battled fiercely. Behind them it was Ayrton Ori, Bryce Aron, and Burton August all fairly spaced out. The pack however would once again be bunched due to the second full course yellow of the race. With time slipping away it was clear that this race would not meet its prescribed lap count and a showdown was set for the limited time remaining.

Green was set to resume the race with only enough time for a single flying lap. Green held the top spot, while Goikhberg in second had been trading Green for fast laps. Kotyk held third with Ori and Vanier showing they are more than capable in these difficult conditions. The field again bunched up by Green as the flag flew, it seemed impossible that his lead would be challenged given the tactical start. Goikhberg however felt different and using the draft managed to take the lead via the outside in turn 1, the checker to fly at the completion of this lap, he now had a rooster tail free view of the road ahead.

However, it was not to be. On the back of the course Green retook the lead, Kotyk fell into second, Ori into third, and Goikhberg who was just a fleeting moment ago the leader came home forth. Unbelievably the race finished under blue skies with the rain having let up once again.

The masters win went to Gord Ross who with a consistent drive showed the prowess of his Britain West Motorsport entry. Cliff Johnson was second in masters and Dave Petzko was third.

Unfortunately it was discovered in post-race inspection that third place finisher Ayrton Ori was found to be out of compliance. Surely a difficult end to fantastic drive. This moved Misha Goihkberg into the third and final podium spot.

Saturday’s race two lineup is based on the fast laps from race one.