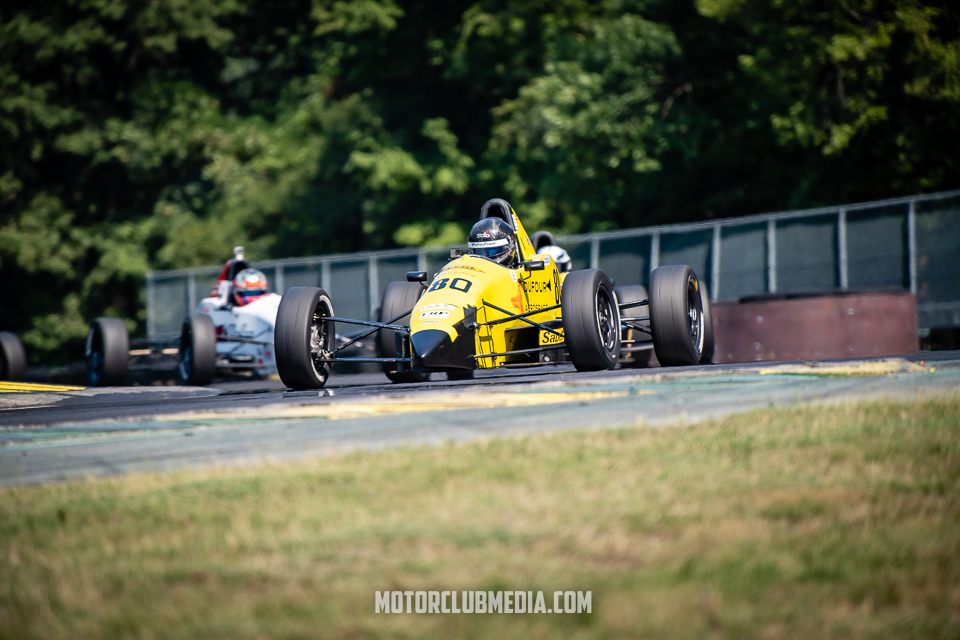 After dramatic crash in Friday practice, Josh Green took pole position and then sealed the deal in a calculated and patient performance during race one at VIR!

Josh Green, currently second in points, is leading the field to the green flag. Meanwhile, the championship leader, Johnathan Kotyk, starts all the way back in fourteenth. For Green, this represents a good opportunity to make a dent in the points lead Kotyk has, but with the draft playing such a large part in F1600, that will be easier said than done.

In much higher temperatures now, Green bunched the field tightly, during the approach to the green the top four spread out kind of wide. Not the prettiest of formations, and indeed the start was called off. A second attempt at green flag racing was needed.

For the second try, the field was much cleaner, and the green flag flew as planned. Josh Green held the lead, Bryce Aron shuffled into second, Dexter Czuba third, Ayrton Ori fourth, our first master’s entry of Scott Rubenzer sits in fifth, and the ever present Kotyk follows in sixth. Notably, Jonathan Kotyk leap frogged at least half the field before the entrance of turn three, and further positions were gained on the back half of the track.

At the front, Green played defensive, it wasn’t going to be easy to get by. That meant that the four cars behind Green were stacking up. Kotyk snuck by Rubenzer to take over fifth, and now first through fifth were covered by a single second.

The leaders go three wide into turn one, nine laps to left to complete, the Pelfrey boys shold the top two spots. Green relegated to second now, it’s Ori leading, if only briefly. By the next time by Green is back in the lead, but Bryce Aron got his turn, and by the exit of turn one he was at the point. There’s been four lead changes in less than two laps, fierce competition is an understatement.

With seven to go, it is Kotyk’s turn at the front. Ori follows, then Aron, Green, and Czuba. The top five have handily gapped those behind. The lead pack often goes two and three wide, leading the race is an exercise in entropy, yet they battle on. The draft is huge, and the top five use it with shotgun like precision.

An incident on track spurs a full course yellow. Only five race laps remain on the counter, there’s only twelve minutes left to finish the race. The pack is slowly filling in behind the pace car. It would be a crime not to let this race finish under green flag conditions.

Sure enough, the track goes live again, they scream down the front straight and past the waving green. No major passes occur but the pack is tight again. There might be some new faces able to play at the front. Indeed, Ryan Bjerke in sixth, Burton Kyle August in seventh, and Charles Anti cling on to the once jettisoned front pack. It is a pack of eight now.

Kotyk still leads, but Ori soon takes it, then Czuba joins in and tries to assume the position. Czuba loses out and falls to third. Down the back straight, it’s Kotyk back to the point. They head to the white flag, one lap to go! Four wide into turn one! Josh Green comes out the better, he’s leading again after a long hiatus out front. Kotyk trails, the two have gapped third through eighth as calamity strikes third through fifth. One Pelfrey car, I think it was Ayrton Ori and then Bryce Aron in the K-Hill entry are off in turn five. The stewards are going to want to review the video, not much doubt about it. Ryan Bjerke and Charles Anti get the spoils of the calamity, they now sit third and fourth respectively.

Back into sight, it’s Green, he has a car length lead over Kotyk. He takes the win! Bjerke comes home third, Anti is fourth, Czuba is fifth. Scott Rubenzer wins in master’s finishing seventh overall. Keith Grant and Bob Reid are second and third in master’s respectively.