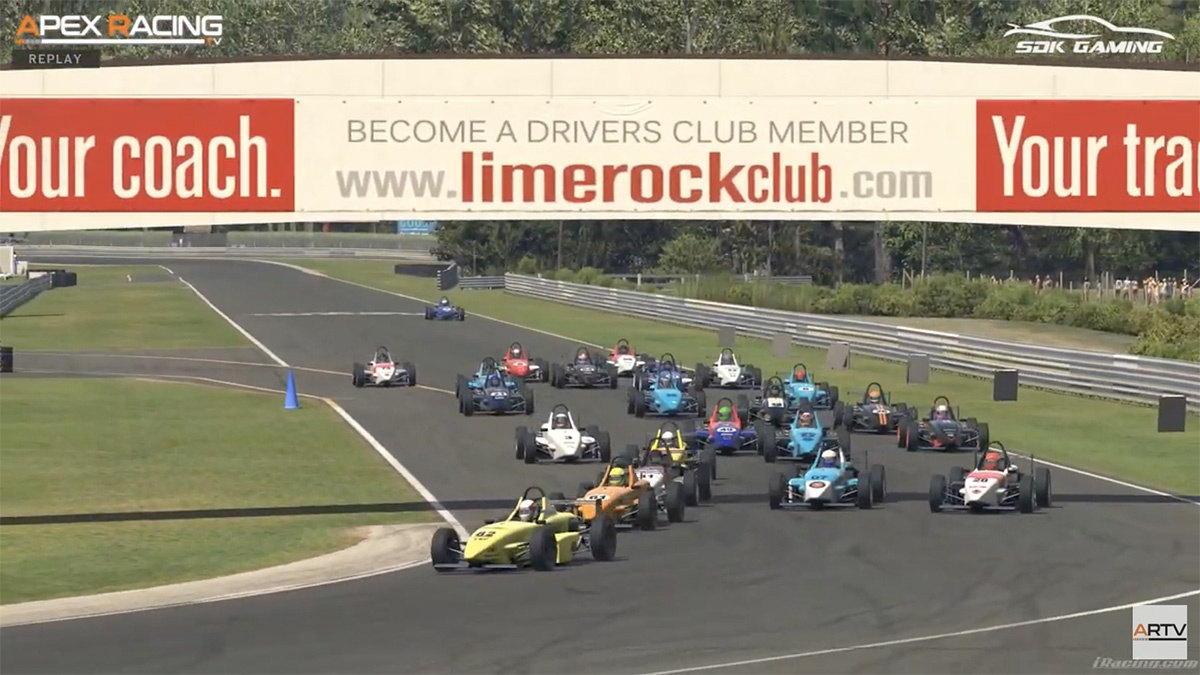 “From idea to conception in less than one week”

The first ever FRP iRacing Challenge Presented by Hoosier Tires was one for the ages and lived up to the hype as Dylan Christie and Max Esterson stole the show scoring a pair of victories for Team Pelfrey. Utilizing the Skip Barber open wheel machines and competing at fast and hard to pass Lime Rock Park, close racing and aggressive battles could be seen throughout the field as drivers look to reign supreme in the virtual world of racing.

In a day that featured partly cloudy skies and a temperature of 77F, it was Dylan Christie and Team Pelfrey that was the survivor of race one as a five-car breakaway grew to eight before contact would relegate some drivers down the running order and out of contention. Christie, who claimed the pole position earlier that day, managed to keep his nose clean and secure the victory in the debut of the FRP iRacing Challenge Presented by Hoosier Tires. In a last lap that featured four cars that could be covered by a blanket, Christie out-dueled Reece Everard (Reece Everard Motorsports) on the final lap to win the race to the checkered flag by a scant .040, reminiscent of the many photo finishes FRP 1600 races are known for. Miles Crabbe (Citation Engineering) ended his first wheel-to-wheel action of the day in third ahead of Kyle August (Rice Race Prep) in fourth who started the last lap at the pointy end of the field. Max Esterson (Team Pelfrey), who was involved in a mid-race scuffle, was one of the fastest cars on track as he rebounded to score a fifth-place finish with Dan Clarke (Brad Hayes Racing), Nicholas Palacio (Palacio Motorsports), Jackson Lee (Rice Race Prep), Brandon Newey (NewCar Racing) and William Liston (Listec RaceCars) rounding out the top-ten. 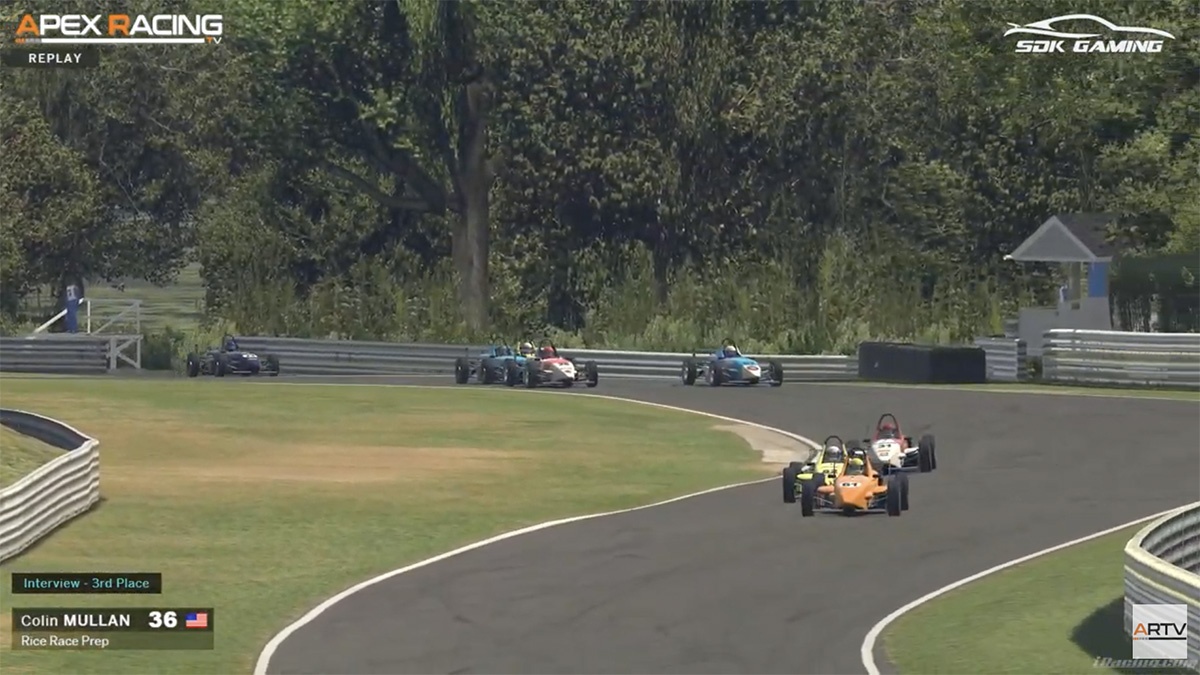 With cars lining up for race two where they finished race one, Max Esterson put on a show as he drove to the front of race two to score the win by .641 after starting fifth. Everard had the most consistent event with a pair of podium results and was the only driver to stand on the podium in both races with two second place finishes. Colin Mullan (Rice Race Prep) started deep in the field to have what could have been the drive of the day to find his way to the podium in third. With an opening lap that saw Mullan go four-wide into turn one, as well as avoid an incident that took out one of his teammates, the Rice Race Prep driver marched forward to finish P3. Christie added a fourth-place finish in race two to his winning result in race one while Crabbe secured his second top-five in as many races. Kyle August finished sixth and Simon Sikes (Rice Race Prep) made his first appearance in the top-ten to finish seventh. Jason Pettit (Brad Hayes Racing), Christopher Wright (Korben Dallas Racing) and William Liston claimed the eighth through tenth place results.

“What a great race and a solid way to start our virtual season,” expressed Bob Wright. “We saw some close racing, fierce battles and a lot of courage by many of these drivers to perform on the virtual stage. Congrats to our podium winners from both races, and we are much anticipating our second event at the same time next week.” 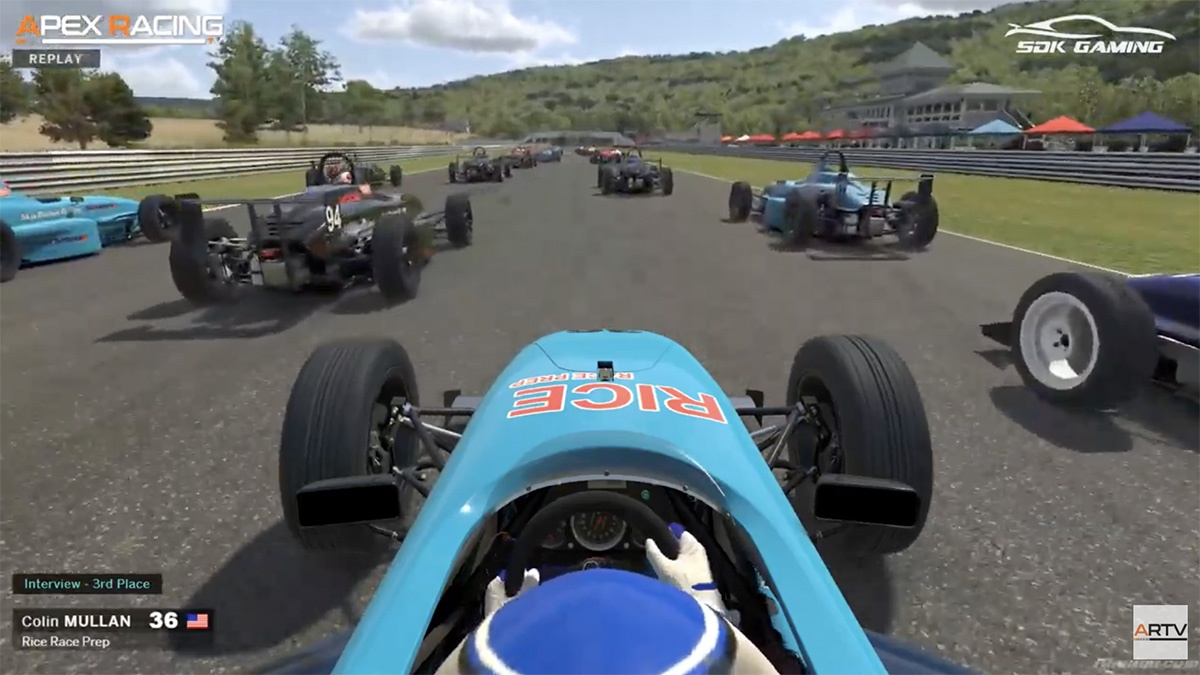 “That was a lot of fun. The Brad Hayes Racing crew did well tonight,” communicated Brad Hayes. “Dan Clarke charged from 17th to finish sixth in race one and then in race two he ran in the top-six, even without a rear wing for much of the race before getting tangled with a back marker. Jason Pettit had bad luck on the opening lap in race one but drove from 21st to eighth in race two and was one of the biggest movers. Looking forward to next week!”

“Had a lot of fun racing in today’s events,” added Colin Mullan. “Thanks to Rice Race Prep and Greg Rice for getting me on board. Ended up charging from 20th to third in race two and gained 13 positions in the first corner. Looking forward to another exciting FRP event next week!”

“It was a lot of fun to catch up to the lead pack with a few laps to go after getting shuffled back at the start,” expressed race two winner Max Esterson. “Going into the last lap in second, I knew my only shot was in turn one, so I just tried to hang it around the outside, and I’m glad it worked out. Overall, the close racing was a lot of fun.”

“Rough night!” exclaimed Ryan Bjerke (Bjerke Motorsports) post event. “Crashed out on lap one in the first race. Just to have a technical issue in race two (internet) and kick me from the session. Just like in the real world we are on to a new week next week and a new race!!! Keep an eye out for the next race of the FRP iRacing Challenge.” 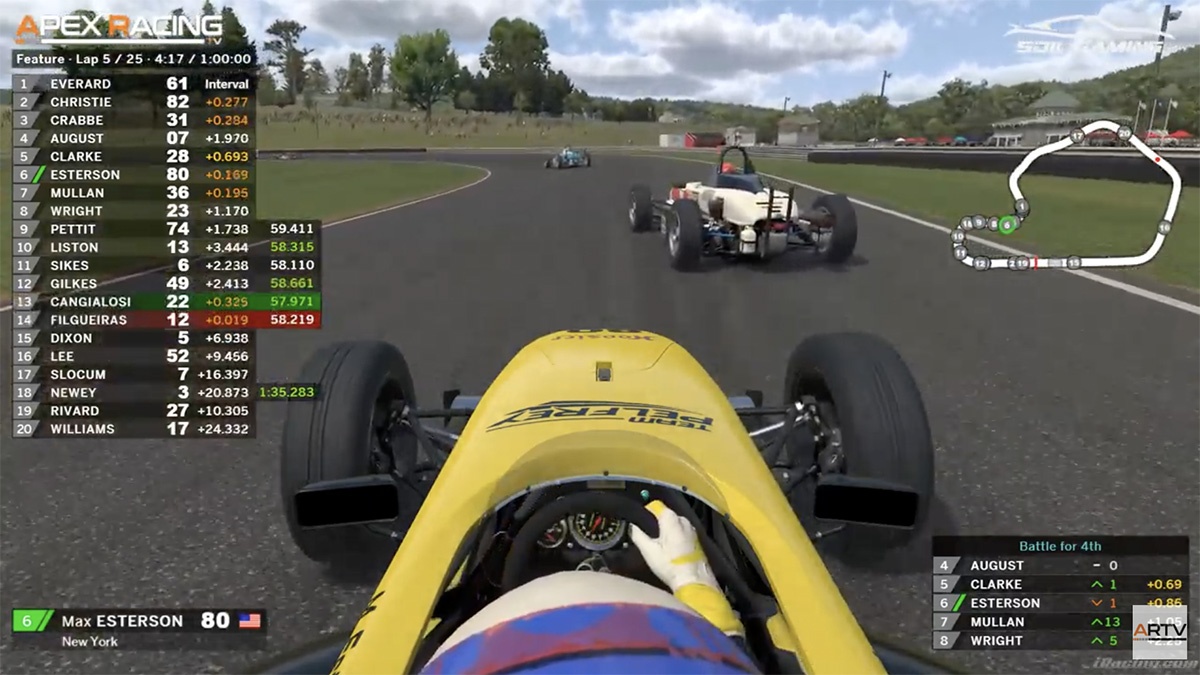