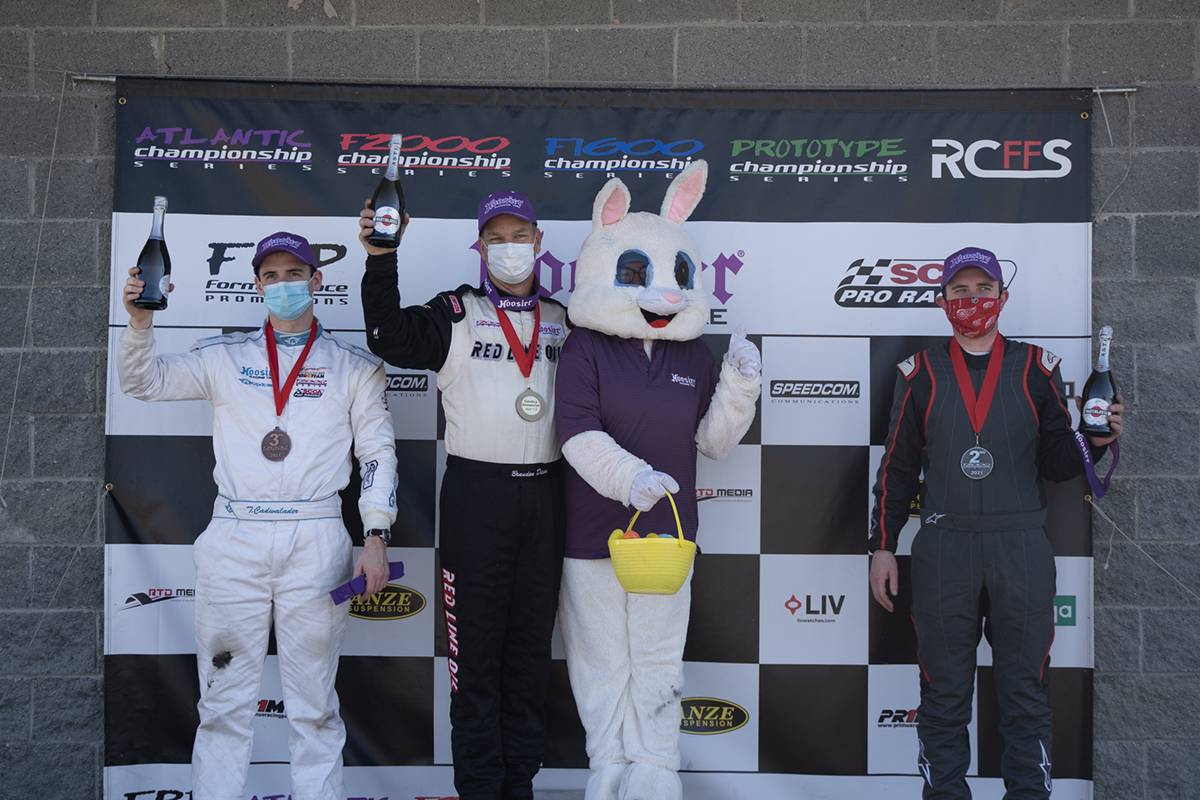 The first Formula Race Promotions (FRP) event of 2021 went off without a hitch this past weekend at the evolving Carolina Motorsports Park in Kershaw, South Carolina. Dubbed ‘The Easter Egg Challenge,’ four FRP classes saw on track time as the much-anticipated season took the green flag. With a Promoters Test Day on Thursday, competitors received more than five hours of available track time over the three-day event.

It was Nicholas d’Orlando who asserted himself as a championship contender in the F1600 class taking a pair of race wins over the weekend as Alex Mayer did the same in F1000, continuing on his dominant season in 2020. Reigning F2000 champion Brandon Dixon took the top honors in race one but Reece Everard flexed his muscles on Saturday scoring the pole position and driving to a victory in race two.

“Thank you to all who attended,” expressed Bob Wright. “Our 2021 season is underway, and we could not be more ecstatic. Thank you to our teams and competitors for another safe and competitive weekend as well to the staff of Carolina Motorsports Park for the incredible hospitality and support in our first trip to the venue. We look forward to seeing you all at Mid-Ohio.”

F1600
In the always competitive F1600 class, it was Nicholas d’Orlando and Team Pelfrey who led the way in qualifying. Normally separated by only hundredths or thousandths of a second, d’Orlando played the draft perfectly to earn the inside front row starting spot by .380. With his fastest lap coming on the very final circuit, d’Orlano beat Exclusive Autosport’s Joey Brienza, Rice Race Prep’s Bob Perona, Team Pelfrey’s Hugh Esterson, and Rice Race Prep’s Will Holtz. Courtesy of his third-place effort in qualifying, Perona was the early leader in the F1600 Masters class as 2020 series champ Scott Rubenzer was second in class but eighth overall.

In the first wheel-to-wheel action of the weekend, the F1600 field had their normal long train of race cars as the front four began to open a gap on the rest of the field by mid-race distance. Led by Brienza and d’Orlando, K-Hill Motorsports’ Ax Kametches and Jonathan Lee ran third and fourth past the mid-race distance. In the late stages of the race, an on-track incident between the leaders forced d’Orlando and Brienza to both retire handing the point to Kametches. Focused on the task at hand, Kametches held his competitors at bay taking the first race win by .256 over Lee. Esterson was able to score the third step on the podium ahead of Holtz and Burton Kyle August. Bob Peron finished sixth to take the Masters win ahead of Rubenzer and Mike Scanlan in third.

In the second F1600 race of the weekend, it was Perona who jumped out to the early lead followed by August and d’Orlando but as it does in 1600 racing, that changed quickly. d’Orlando moved to the point only to be overtaken by Perona a lap later as Joey Brienza marched forward to move into the third position. On lap six it was d’Orlando back to the point as Perona and Jonathan Lee occupied the top three positions as they began to open a small gap on the rest of the field. Halfway through and it was d’Orlando who opened a 1.394 gap on the field as they battled behind him and with more solid laps on lap ten and eleven, stretched that gap further. Lee was just over two seconds ahead of the new third-place runner Will Holtz as Huge Esterson and Brienza were able to move into the top-five. Esterson disposed of Holtz a lap later to move into a podium spot as yesterday’s winner, Ax Kametches, advanced to sixth after starting deep in the field. It was all d’Orlando from there turning fast lap after fast lap to drive off to the win. Jonathan Lee would cross the line in a distant second ahead of Perona, Holtz, and August. Bob Perona’s P3 finish overall gave him the top honors in the F1600 Masters class as Scott Rubenzer and Steve Roux joined him on the podium.

It was all d’Orlando in race three on the weekend as the Team Pelfrey driver went from flag-to-flag to score his second race win of the weekend. Though he was not the fastest driver on track, d’Orlando was one of the most consistent as he stretched his lead to nearly three seconds when the white flag flew. With some on-track scuffles behind him, the second and third place drivers made contact opening the door for Joey Brienza to climb to the second step on the podium while Will Holtz earned his first career FRP podium result. Round one winner Ax Kametches crossed the line in fourth as Burton August rounded out the top-five. Scott Rubenzer took advantage of contact that Perona had in the latter stages of the race to claim the F1600 Master victory.

F1000
Alex Mayer continued 2021 right where he left off in 2020 dominating the F1000 class qualifying session to set a new track record on his way to the pole position. Earning the top spot by a huge 1.599 gap, Shane Prieto and Reilly Harris would slot into the second and third positions based on their best laps.

Returning to the track on Friday for their first of two races, Mayer led the field to the green and never looked back. Taking the uncontested flag-to-flag victory, Mayer also scored the fastest lap of the race, scoring that on his twelfth of fourteen circuits. Prieto kept Mayer honest throughout the first race for the F1000 drivers crossing the line in the second position as Reilly Harris rounded out the podium in third. It was the #81 of Tim Perce and the #93 of Stephen Hamilton, finishing fourth and fifth on track to secure solid results to begin their 2021 campaigns.

Mayer continued his front-of-the-field presence on Saturday nearly matching his qualifying pace from the day before scoring the pole position for round two. Getting the jump on the opening lap to move up front, Mayer settled into a fast and consistent rhythm that allowed him to pull away from the rest of the field. Another dominating performance, Mayer led flag-to-flag for his second race win of the weekend as Shane Prieto was the bridesmaid for the second race in a row finishing second. Pierce was able to improve his race two finish leveling up from fourth to third to stand on the podium as Nathan Boyd made an appearance in the top-five to finish fourth. Saturday’s third-place finisher Stephen Hamilton earned his second top-five result in as many days crossing the line in P5.

F2000
Similar to Mayer in F1000, it was multi-time and reigning champion Brandon Dixon who started his season off right carrying his momentum from 2020 to earn the first pole position of the new year. Reece Everard slotted into the second position, just ahead of Thomas Cadwalader.

Dixon jumped out to the lead of the first F2000 event of the year, but it wasn’t a run and hide type of race as Reece Everard paced Dixon and the duo were separated by just three tenths after eight laps of the Carolina Motorsports Park facility. Everard closed the gap to less than a tenth on lap nine, but Dixon responded a lap later turning his fastest lap of the race on lap ten. Thomas Cadwalader slipped by Robert Wright for P3 on the same lap, pushing Wright back to fourth and Austin Hill in fifth. Dixon again went faster on lap eleven to signify his pace and run for the title as he led flag-to-flag to take the victory. Everard continued to push Dixon until the end, turning his fastest lap of the race on lap sixteen and finishing only .458 behind the multi-time champion. Cadwalader crossed the line in third for a podium result to start the season with Hill and Wright rounding out the top-five. However, Everard misjudged his weight and was disqualified after post-race race technical inspection moving Cadwalader into the second position and Austin Hill to third.

Saturday saw Everard rocket to the top of the timesheets in qualifying claiming the fastest lap and pole position on lap seven of his seven-lap qualifying stint. Showing pace with a 1:27.935, Everard was .447 ahead of round one winner Dixon as Cadwalader, Hill, and Wright rounded out the top-five.

Everard jumped out to an over four-second lead after only two laps as Dixon was mired back in the third position but on lap three, the #7 machine of the multi-time champion moved into second and began to take chunks of time out of the leader’s gap. By lap six, Everard had settled into a rhythm of his own and kept the gap just around three seconds.

On lap nine, Dixon had a slight bobble and slowed over a second that lap as the door looked to be open for Everard to take his first win. Everard had a difficult lap on the eleventh circuit giving the second he gained back to Dixon as the pair played cat and mouse. Austin Hill and Robert Wright had a steady race to run third and fourth as Cadwalader ran fifth, right under the rear wing of Wright. Everard managed to hold his gap and score his first F2000 FRP victory of 2021 as Dixon and Hill stood on the podium in second and third. Thomas Cadwalader was able to get by Wright in the late stages of the race to earn the fourth position pushing Wright back to finish fifth.

FV
Mitchell Ferguson turned the fastest lap in the Formula Vee qualifying session as he was .370 clear of the field. Gregory Bruns was the best of the rest in the second position as Sam Ryan, Sherman Engler and Trevor Carmody rounded out the top-five.

Carrying his qualifying speed into great race pace, it was Ferguson who led the field to the checkered flag earning his first victory of the 2021 season. Only .471 in arrears over the thirteen-lap race was Sam Ryan as he advanced one position from his third-place starting spot. Gregory Burns slotted his Vorscha into the third position earning a spot on the podium with Carmody leveling up one position from his qualifying effort to finish fourth, just ahead of Dean Curtis.

Ferguson returned Sunday with a vengeance and was once again the dominant Vee driver of the day. Earning the pole position by nearly a second, Ferguson went on to score his second win of the weekend to sweep the first two rounds of 2021. The Carmody last name was once again represented in the top -five with Trevor in second and Raymond in fifth as they bookended the third and fourth place finishers of Sherman Engler and Chris Elwell.

It is only a few short weeks until the next FRP event as the series will travel north to the famed Mid-Ohio Sports Car Course in Lexington, Ohio over the April 30-May 2 weekend. Stay tuned for all the details, news, and information regarding the event.

Please remember that all series news, information, results, photos, and PR will be communicated through our social media pages listed below. Please be sure to tag FRP in any and all posts to help us have the ability to promote you.