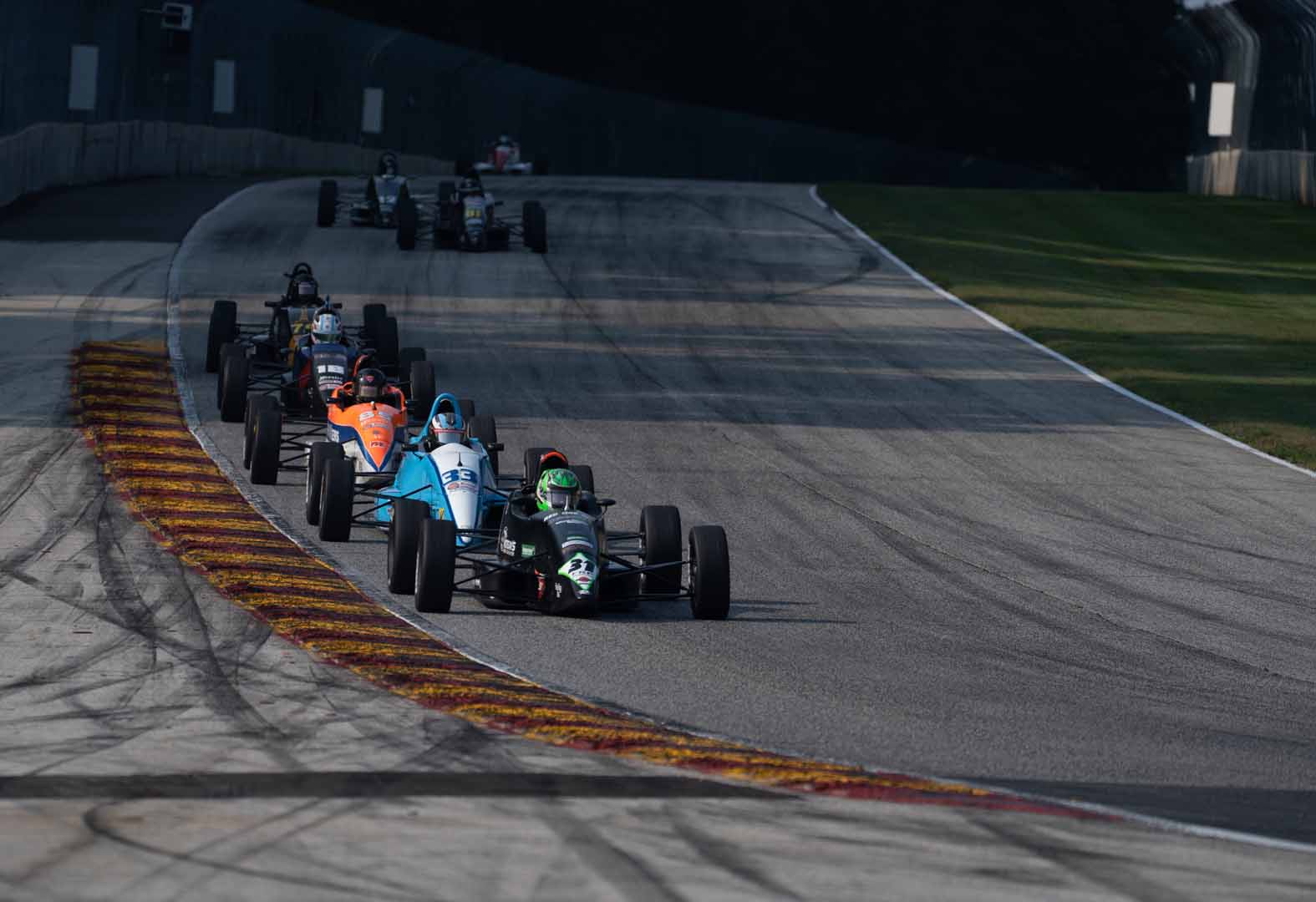 With Racing at venues such as Barber Motorsports Park and the Mid-Ohio Sports Car Course already concluded in 2021, Formula Race Promotions provided teams and competitors a visit to another one of North America’s legendary facilities. Road America, nestled in the hamlet of Elkhart Lake, Wisconsin, the 4.014-mile, 14-corner was the home for FRP this weekend and it provided another epic weekend of racing.

“With the sheer size of Road America and the track length, drafting and teammates become very important,” explained Bob Wright. “You need to have friends out there to go fast but if you are a smart driver, anything is possible. It was great to see some new names join the series as well as some old friends return.”

Competing alongside the USAC sanctioned Porsche Challenge North America program, a comfortably paced race weekend began on Friday with a full day of practice. Saturday and Sunday provided the backdrop for some wheel-to-wheel racing as race winners were crowned at the end of their respective sessions.

After a day of practice on Friday, it was Team Pelfrey’s Nicholas d’Orlando who took his #81 entry to the top of the charts in the one and only qualifying session. Turning a lap of 2:23.306, d’Orlando was more than two tenths faster than his nearest competitor and would start the first wheel-to-wheel action of the weekend from the inside of the front row. Exclusive Autosport’s Joey Brienza was the best of the rest in P2 as Rice Race Prep drivers Mikhael Goikberg and Burton Kyle August solidified row two with the third and fourth fastest laps of the session. Tim Kautz was fifth on the charts but led the F1600 Masters contingent as Robert Perona and Jay Messenger locked in the front three spots in qualifying.

Joey Brienza gained one position, but it was all that was needed to take the first F1600 race of the weekend. The early laps had some of the most dramatic and competitive racing of the season, but with an uncharacteristic long caution to retrieve a car from the kink, the race finished under the the safety car. Despite only having the 15thfastest lap, Brienza used his race craft to keep his #92 machine at the front of the field and the top of the results sheet. K-Hill Motorsports’ Ax Kametches advanced forward to earn another 2021 podium finish with an impressive second place result while pole position winner d’Orlando would fall to third but salvage a podium result. F1600 Masters driver Tim Kautz finished fourth on track giving him the top step of the Masters podium with Rice Race Prep’s Will Holtz rounding out the top-five overall. With Kautz topping the Masters class results sheets, 2020 F1600M Champion Scott Rubenzer secured the second step on the podium in the combined class with David Livingston Jr. coming home third.

With fast times from race one setting the grid for race two, the front three positions would be occupied by three of the F1600 fixture programs. Team Pelfrey’s Hugh Esterson lined up on the inside of the front row, just beside Ax Kametches K-Hill Motorsports entry and just ahead of Holtz in in his Rice Race Prep machine. Holtz was a man on a mission in race two and managed to be the first driver to the checkered flag to earn his first career Formula Race Promotions victory with some new faces joining him on the podium. Jace Denmark crossed the line in second to earn his first podium of the year and Robert Perona finished third overall and led the F1600 Masters drivers to take the class win. Race one winner Joey Brienza crossed the line fourth overall and Nicholas d’Orlando kept his championship dreams alive with his a fifth-place finish. With Perona taking the Masters race win, Jay Messenger and Bob Reid celebrated with him on the podium as the second and third place masters finishers.

Burton Kyle August began his quest for victory in race three from the pole position courtesy of the fastest lap in race two and was joined by Holtz, Denmark, d’Orlando and Jonathon Lee in the first five starting positions. d’Orlando ended up on the top of the podium when after a full round of competitive racing, leaders Tim Kautz and Joey Brienza came together approaching the checkered flag. With the top three separated by less than four tenths, Mikhael Goikhberg was able to join d’Orlando on the podium in second, just ahead Jace Denmark in third. Ax Kametches was able to finish in the fourth position, adding another solid finish to his weekend while Burton Kyle August finished fifth. In the Masters class, David Livingston topped the podium to score the race three win ahead of Scott Rubenzer and Mike Scanlan. 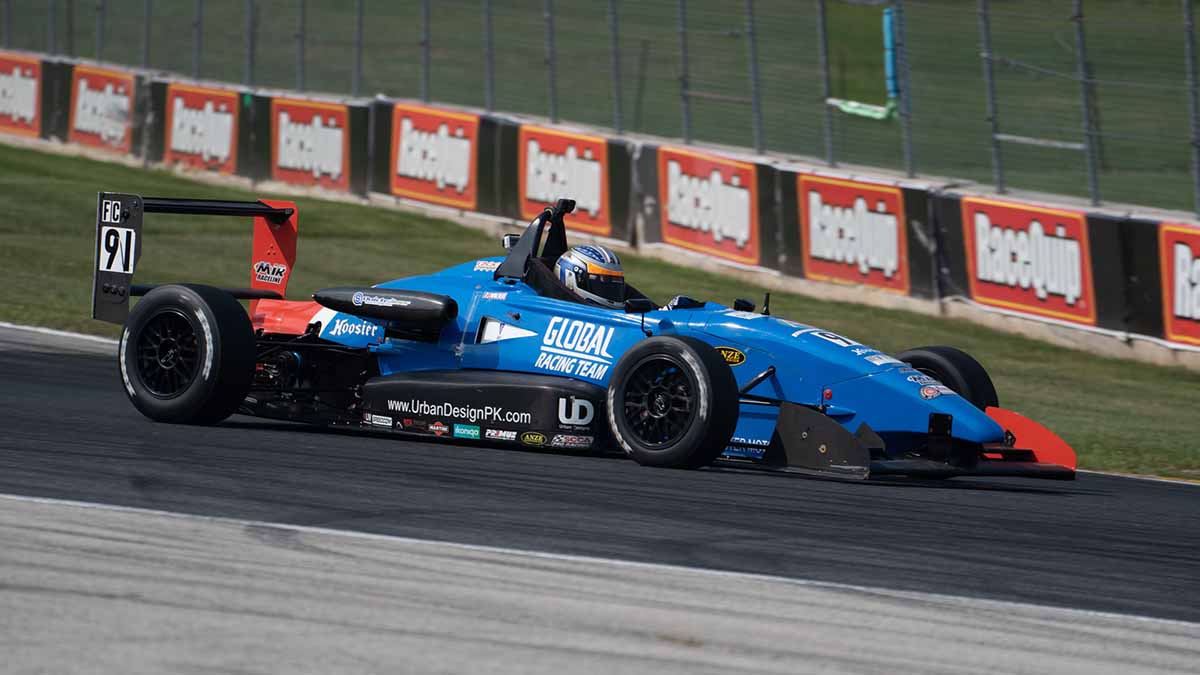 It was all Trent Walko and the Global Racing Team in F2000 qualifying as he dominated the session with a time of 2:14.697 shattering the old 2010, 2:15.271 qualifying record held by Daniel Erikson to earn the pole position ahead of Team Pelfrey’s Dexter Czuba. ZSports Dylan Schenk edged the #90 of Robert Wright by .002 for the third starting position as Austin Hill solidified a top-five starting spot in fifth.

Trent Walko continued his way in the first F2000 race of the weekend but for him, it wasn’t really a race. Setting a new race lap record of 2:14.718 vs the 2:16.326 of Victor Carbone, Walko was the class of the field driving to another victory this season. Austin Hill, who had to rent a car just before qualifying due to a loss in oil pressure in his primary ride, drove to an impressive second place result with Czuba crossing the line in third and rounding out the podium. Schenk fell one position in the race to narrowly miss the podium but managed to finish just ahead of the fifth-place driver Robert Wright.

Picking up where he left off on Saturday, Trent Walko again claimed the F2000 pole position for the second wheel-to-wheel action of the weekend and lowered the qualifying record to 2:14.327. Austin Hill lined up on the outside of the front row as Dext Czuba slotted his Team Pelfrey entry into the third position. When the green flag flew it was all Walko as he turned another race lap record of 2:14.445 enroute to his second win of the weekend. Czuba advanced forward from his third place starting position to finish second as Robert Wright held on for his first podium result of the weekend in third. Steve Thomson finished fourth on track, just ahead of F2000C competitor Mark Hutchison who crossed the stripe sixth overall but first in his class. 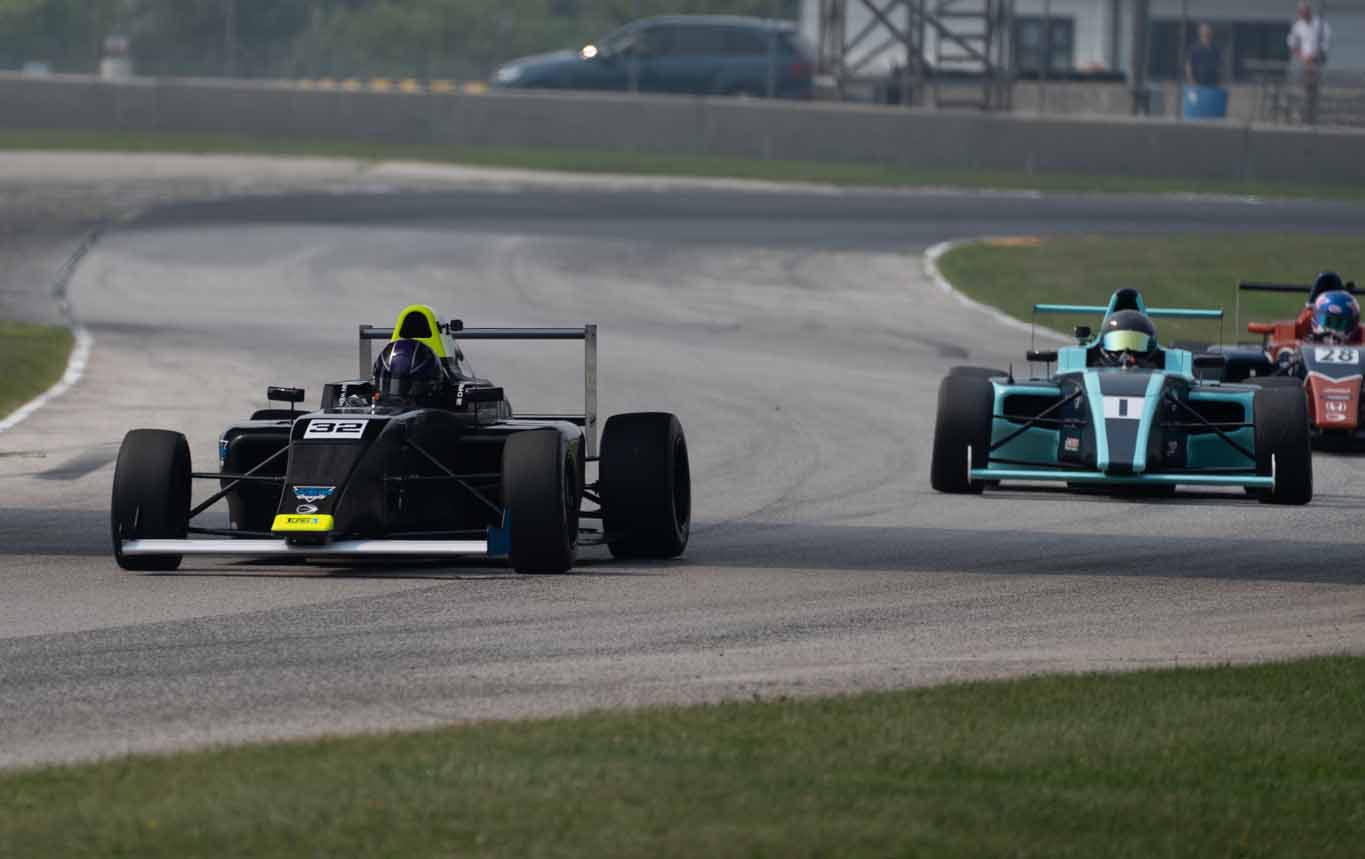 Christian Weir claimed the top honors in Eastern Pro 4 Challenge qualifying as he was the only driver with a working transponder to put in a laptime to earn the pole position. The Jensen Global Advisors duo of Arthur Wilkinson and Kerong Li would be classified in second and third and would start in those respective positions for the first wheel-to-wheel action of the weekend.

Christian Weir rocketed away from the Pro 4 grid and managed to add another victory to his resume. Lapping the Road America facility at a blistering pace, Weir climbed to the top step of the podium ahead of Arthur Wilkinson and Kerong Li.

It was all Christian Weir again on Sunday as the Turn 3 Motorsports driver earned the Eastern Pro 4 Challenge pole position over Wilkinson and Li who again slotted themselves into second and third. Weir went on to take the race two victory to sweep the weekend including two pole positions, two race wins and two fastest race lap honors. Wilkinson remained consistent on the weekend with his second podium result in second as Li rounded out the top-three in third. 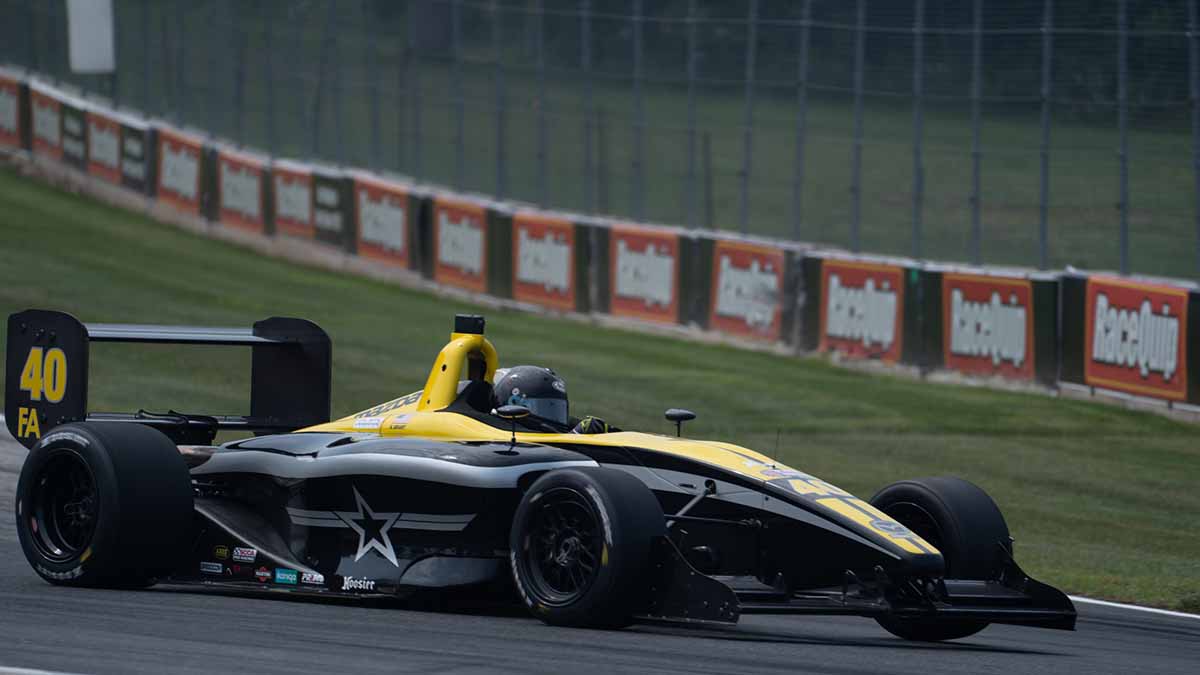 After dipping below the 2:00.00 mark in Friday’s practice session, Tony Ave continued his top of the results performance on Friday by taking the Atlantic pole position with a 2:00.284. Only .193 in arrears of Ave was Keith Grant as the pair of drivers were the class of the field. Richard Zober clocked the third fastest lap of the session to line up inside row three as Lee Alexander slotted himself into fourth overall but first in the Restricted class, just ahead of Chris Ash in fifth.

Second in qualifying, Keith Grant climbed to the top of the charts in the first Atlantic race of the weekend scoring the fastest lap of the race. His run got a little easier on lap eleven when pole position winner Tony Ave was forced to retire which opened the door for F1600 alumnus Yuven Sundramoorthy, to add an Atlantic podium result to his USF2000 podiums and race wins this year. Dudley Fleck advanced forward multiple positions to round out the podium in third as Lee Alexander and Richard Zober crossed the stripe fourth and fifth respectively, with Lee wining the Restricted class, followed by Kirk Kinsfater and Austin Hill.

With his win on Saturday and momentum heading into Sunday, Keith Grant earned the pole position for the second Atlantic race of the weekend, edging out Tony Ave for the top spot. Dudley Fleck was the third quickest driver of the timed session, just ahead of Augie Pabst and Lee Alexander in fourth and fifth. It was Ave who rose to the occasion in the race though moving to the point and taking the race win enroute to the fastest lap of the race. Augie Pabst was able to climb to the second position on track, with Chris Ash rounding out the Open class podium in third. Mechanical issues dashed Keith Grant’s hopes for a weekend sweep, forcing an early retirement. In the Restricted class, Lee Alexander had a decisive first place finish finishing amongst the top open class competitors, followed by Austin Hill and Kirk Kindsfater.

The Formula Race Promotions program will now have a short three-week break before their next event at Summit Point Motorsports Park in West Virginia taking place over the August 20-22 weekend. Stay tuned for all the news and information regarding the event and find details about the event on the FRP website at racefrp.com.