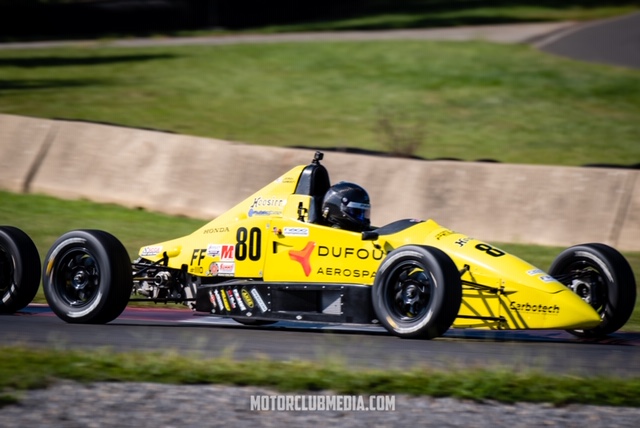 Josh Green takes another win and continues to close on Jonathan Kotyk for the points lead here at Summit Point, West Vriginia.

The weather conditions have improved significantly for race one here at Summit Point. Sunny skies and a cool temperatures have arrived upon the circuit. For championship leaders Jonathan Kotyk and Josh Green this must be a relief. One notable change in the field is the lack of Pelfrey entries. This weekend, only Josh Green is present, and for the first time this season it means that Kotyk has more teammate support than Josh Green. This is represented by the third place starting spot of Bryce Aron, and it could prove a critical advantage for Kotyk in these waning rounds of the championship.

To the green flag, it was Josh Green with the jump. Kotyk fell into second but he wasn’t able to challenge into turn one. Heading to turn three, Kotyk gets a run around the outside of Green. It looks like the pass stuck. Indeed, Kotyk leads lap one. Green is second, Aron third, and Jackson Lee is fourth. Joe Colasacco is fifth and leads master’s.

By the end of lap two, Green retakes the lead, but Kotyk isn’t content and again he passes Green in turn three. Aron and Lee are right there with them, the top four have broken away. There’s a three car race for fifth, Colasacco still with the advantage, but Burton Kyle August and Charles Anti are right there on his tail.

With thirteen laps to go, Green, Kotyk, and Aron go three wide into turn one. Aron takes the lead, Kotyk to second, and Green falls to third. Later in the lap, Kotyk gets by Aron while Green falls to fourth as Jackson Lee takes over the third spot. Meanwhile, Burton August got by Colasacco to take the fifth spot.

At the halfway mark, Jackson Lee is taking his turn at the point while Kotyk, Aron, and Green fight on. August is now fifth, Anti sixth, and Colasacco has fallen to seventh. The top four keep battling and a lap later they go three wide down the front straight. Kotyk is now the leader.

Six laps remain, Kotyk has managed the a gap of half a second. Lee follows, Green is third, and Aron is fourth, but the order doesn’t stick. Lee gets wide off the final corner, he’s out of contention for the win but runs safely in fourth. Kotyk’s lead grows, he’s over a second out front. Aron is attacking second place Green, if they fight, Kotyk might get away!

For fifth place, Anti now holds the spot. August follows, and Colasacco stocks in seventh, less than a second covers the three.

With four laps to circulate, Kotyk is still out front. The gap is just under a second, Green is in second, and Aron is third. The race for the win is currently fought on pace, but it won’t take much to let Green get in touch with Kotyk.

The next time by, Kotyk weaves down the front straight, he’s doing everything he can to break the draft. It’s not enough though, Green draws close! The gap is under half a second. Two laps remain, Kotyk runs a defensive line into turn one, Green can’t make a move. For the battle for fifth, it’s August now in the spot. Anti is sixth, and Colasacco seventh.

The white flag flies, Kotyk and Green side by side into turn one. Kotyk plays defensive, Green is held off. Green takes a look into turn three, Kotyk has him blocked again. They come back into sight, it’s Green to take the win! He got by Kotyk down the back straight. Aron comes home third, Lee is fourth, August fifth, Anti is sixth. Colasacco is seventh and wins master’s, Scott Rubenzer is second in master’s, and Bob Reid third.