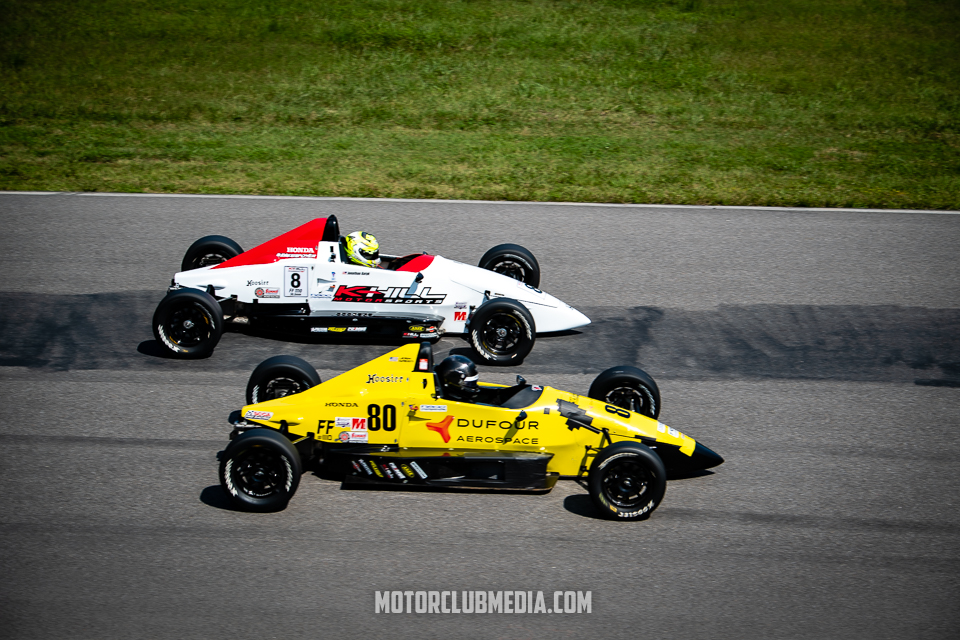 Josh Green and Jonathan Kotyk battled the entire race, but it was Green with the advantage to the line for his second race victory of the weekend.

The sun continued to shower the VIR complex and the F1600 competitors rolled onto the track arranged according to their fast laps from the prior race. That set the race one winner, Josh Green on pole. Jonathan Kotyk in second, Burton Kyle August in third, Charles Anti in fourth, and Ryan Bjerke in fifth.  The calamitous finish to yesterday’s race gave the starting order a bit of shakeup compared to what we are used to, perhaps we will see another podium full of fresh faces.

The green flag flew, and the drivers got cleanly through turn one. Green held the lead, Kotyk fell into second. A battle began for the third spot, August, Bjerke, and Anti fought through turns three, four, and five. The front two built a gap as a result. At the first cross of the start finish line the top two were nearly three full seconds adrift. Green and Kotyk switched spots into turn one, Kotyk now in the lead. There’s a large pack for the battle for third, but they are well adrift the front two. The pack will have to settle down if they are to catch the leaders.

With eleven laps left, it’s Green then Kotyk, they have stretched the gap to well over three seconds. Bryce Aron in his K-Hill entry runs third and he heads a large pack. Ryan Bjerke is continuing a strong performance in fourth, Dexter Czuba is fifth, Charles Anti sixth, and Scott Rubenzer seventh. All these drivers run nose to tail.

Kotyk and Green continue to swap the lead, at this point they grew the gap substantially to third, and they looked to be biding their time and working on strategy for a duel later in the race. The battle for third was fairly similar, Czuba and Aron swapped spots numerous times, but with Bjerke, Anti and Rubenzer battling behind the pack was starting to split. Czuba and Aron had some breathing room in their fight for third.

With five laps remaining, Rubenzer has disappeared, he’s fallen well back. There are now three distinct packs at the front, each containing two cars. It’s Kotyk and Green, Czuba and Aron, and Anti and Bjerke. That composes first through sixth respectively. Rick Payne Leads master’s and is seventh overall, Keith grant is second in Master’s, and Mike Scanlan third in the category.

Coming to the line, leaving just four laps to complete, Kotyk has a bit of an advantage for the first time. The lead is almost a full second. Something must have happened, Green’s last lap time is more than a second slower than his previous lap. Bryce Aron and Dexter Czuba continue to battle, it’s Aron in third. Ryan Bjerke and Charles Anti also continue to fight, currently it’s Bjerke with the advantage.

There’s just two more laps to circulate now, Kotyk and Green are once again joined at the hip. Green leads only for Kotyk to draft by into turn one. Aron and Czuba do the same, Aron takes the third spot. For fifth and sixth, the battle has cooled off, but only slightly as Anti stalks just off Bjerke’s tail.

As the white flag flies, it’s Kotyk leading, he gets defensive on Green. It’s doesn’t work and Green drafts by into turn one. Czuba retakes the third spot from Aron in the same manner as Green.

The leaders return into view, Green down the inside of Kotyk over turn fourteen, Kotyk must have lead down the back straight. Crossing the finish line, it’s Green that wins! Kotyk is second, Czuba is third, Aron fourth, Anti and Bjerke go side by side to the line to get fifth and sixth respectively. In the master’s category, Keith Grant won, Rick Payne was second, and Mike Scanlan third.