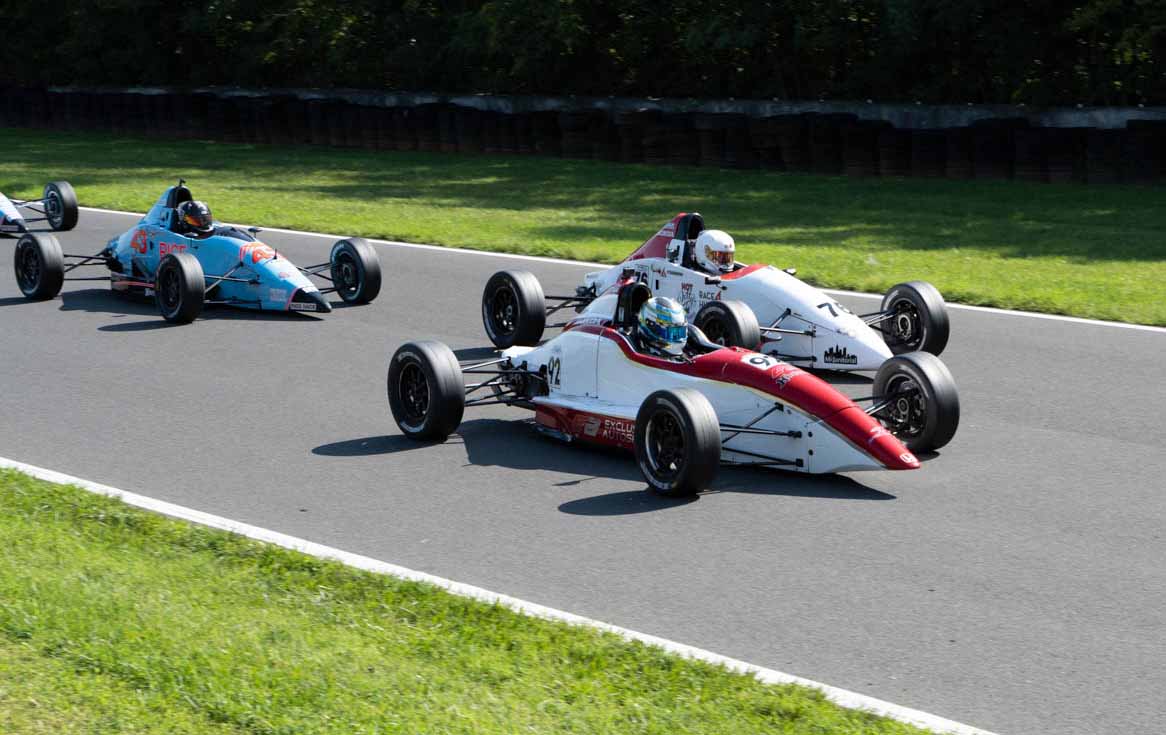 Another race weekend is in the books for Formula Race Promotions as the growing program competed this past weekend at the Summit Point Motorsports Park. With multiple classes of competition highlighted by very little yellow flag caution periods, drivers were able to get the best bang for their buck at the ten-turn, two-mile layout.

“Thank you is all I can say after a great weekend,” expressed Bob Wright. “Our class championships are taking shape, and we had another great weekend of racing and none of this would be possible without our teams, drivers and supporters. Summit Point provided some of the best and closest racing action we have seen in a long time, and I am already looking forward to the next one.” 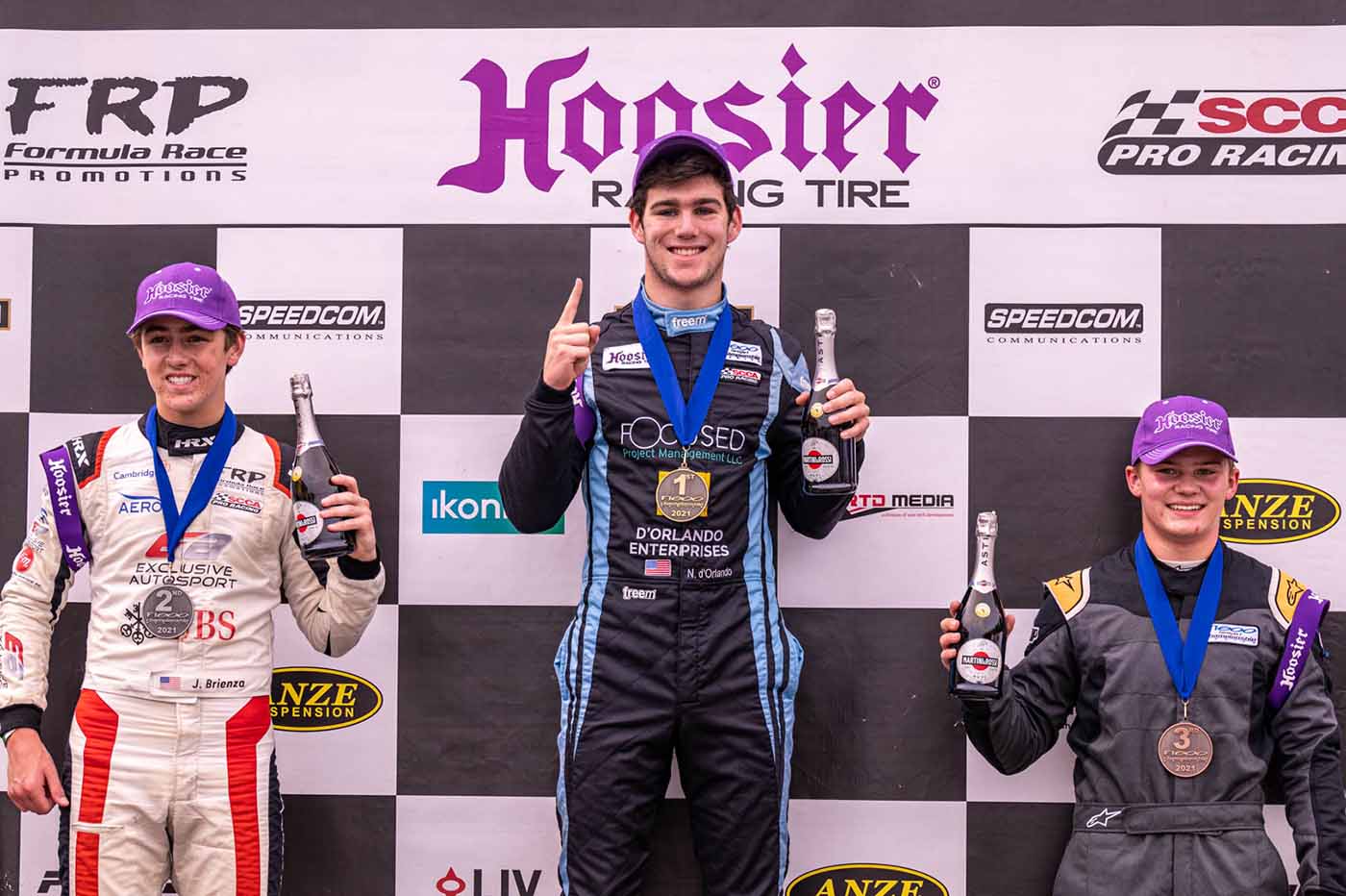 In the always entertaining F1600 class that provided great racing not only at the front, but throughout the field, we again saw some of the closest and most dramatic racing there is, with way too many lead changes to report. In race two, the top five finishers were all within four tenths of a second, requiring another photo finish to verify the podium spots.

For Race one qualifying, it was Jonathan Lee who climbed his way to the top of the charts in race one qualifying ahead of Team Pelfrey’s Hugh Esterson. Rice Race Prep newcomer Andre Castro outpaced Joey Brienza for the third position as 2021 race winner Ax Kametches was just ahead of Nicholas d’Orlando in fifth. Steve Oseth was the fastest of the F1600 Masters drivers taking top honors in that class just ahead of Rob Albani, Scott Rubenzer, Mike Scanlan and Bob Reid.

Brienza made his presence felt in the first F1600 wheel-to-wheel action of the weekend climbing to the top of the results sheets and adding to his 2021-win total. Will Holtz earned himself another podium result moving forward through the 17-lap race to cross the line in second. Burton Kyle August put a pair of Rice Race Prep drivers in the top-three following his teammate across the line for third. Kametches maintained his qualifying position to finish fourth just ahead of F1600 Master winner Scott Rubenzer, who claimed the fifth position overall. With Rubenzer taking the victory in the older driver age bracket class, Rob Albani and Steve Oseth joined him on the podium as they finished sixth and seventh overall on track. Courtesy of his fastest race lap, August earned the pole position for race two on the weekend as he and Holtz would occupy the front row.

Nicholas d’Orlando returned to the top step of the podium in race two as the Team Pelfrey driver strategically moved his way forward throughout the seventeen-lap event. Andre Castro climbed his way to a P2 finish while Brienza added his second podium result of the weekend in third. Ax Kametches earned a top-five result in fourth as Will Holtz hung on for fifth. In the F1600 Masters class it was Scott Rubenzer who returned to the top step of the podium ahead of Rob Albani and Mike Scanlan. Courtesy of the fastest lap in race two, Ax Kametches and Hugh Esterson would occupy the front row for race three while Andre Castro and Joey Brienza starting in row two.

It was d’Orlando who picked up his second win of the weekend with the round three victory as well as the fastest lap of the race honor. Joey Brienza secured a second-place finish upping his podium total to three over the weekend and finishing just ahead of Will Holtz in third. Hugh Esterson had another strong run to claim the fourth position as the checkered flag flew with Andre Castro ending his weekend in fifth. Scott Rubenzer found his way back to the top step of the podium in the F1600 Masters class with Steve Oseth, John Dole, Mike Scanlan and Bob Reid rounding out the top-five. 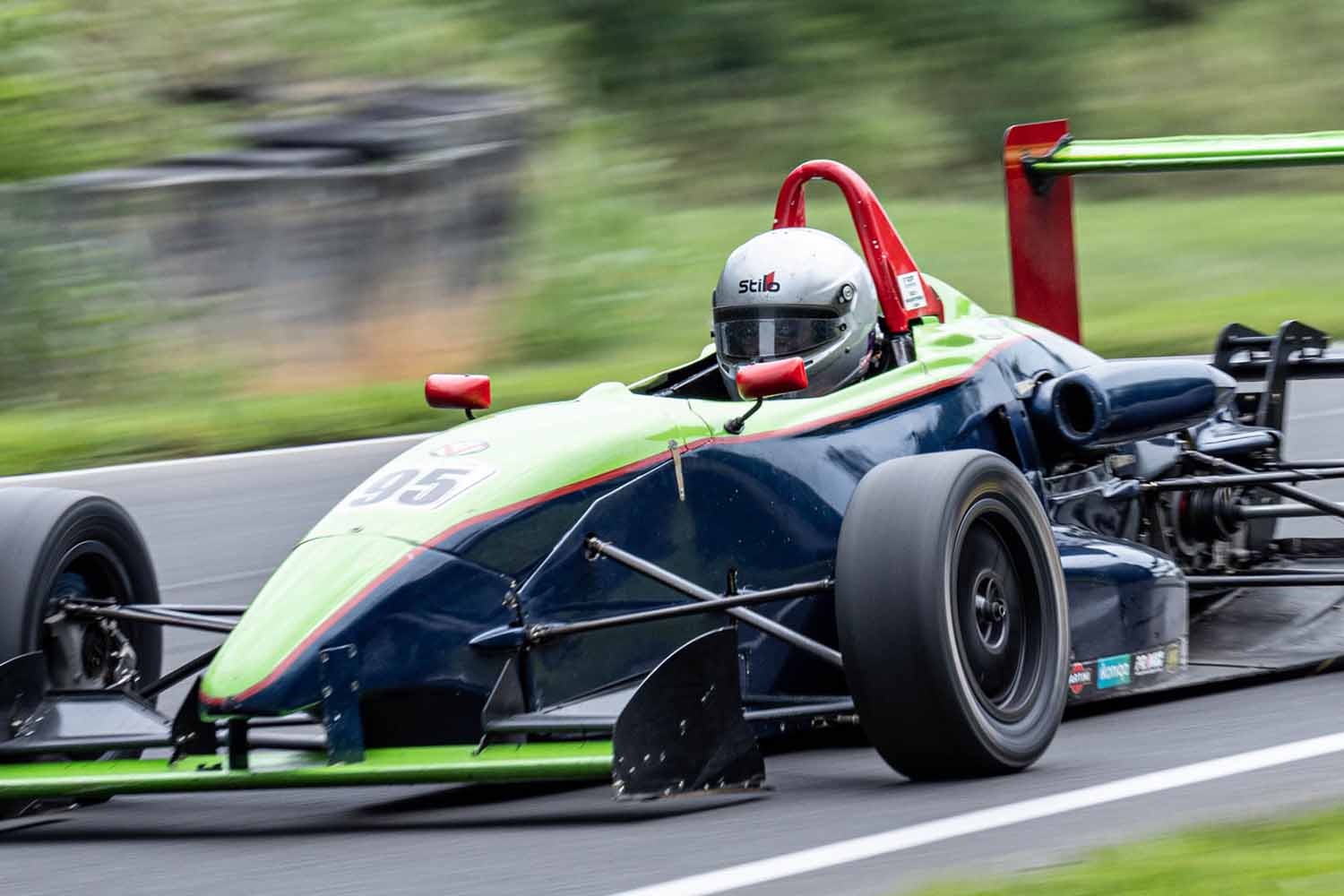 Tim Minor secured the overall F2000 and F2C pole position for race one, followed by recent race winner Trent Walko on the outside of row one ahead of Austin Hill and Nick Palacio in third and fourth, as Robert Wright slotted himself into fifth.

Trent Walko took top honors in the F2000 class, and Tim Minor the F2C victory, with both breaking track records in their respective class. Nick Palacio was second in class in F2000, joined by Austin Hill on the podium in P3. Robert Wright and Dimitrios Tsesmetzis rounded out the top-five. Behind Minor in the F2C class it was Mike Pepitone who finished in the second position.

Tim Minor again scored the pole position for the second F2000 race of the weekend as he topped the charts in the F2C class while Walko was the top qualifier in F2000. Minor went on to win the F2C division while Austin Hill was the victor in F2000 beating Nick Palacio and Dimitrios Tsemetzis. Pole position winner Trent Walko retired on lap six to ruin any chance for his perfect weekend. 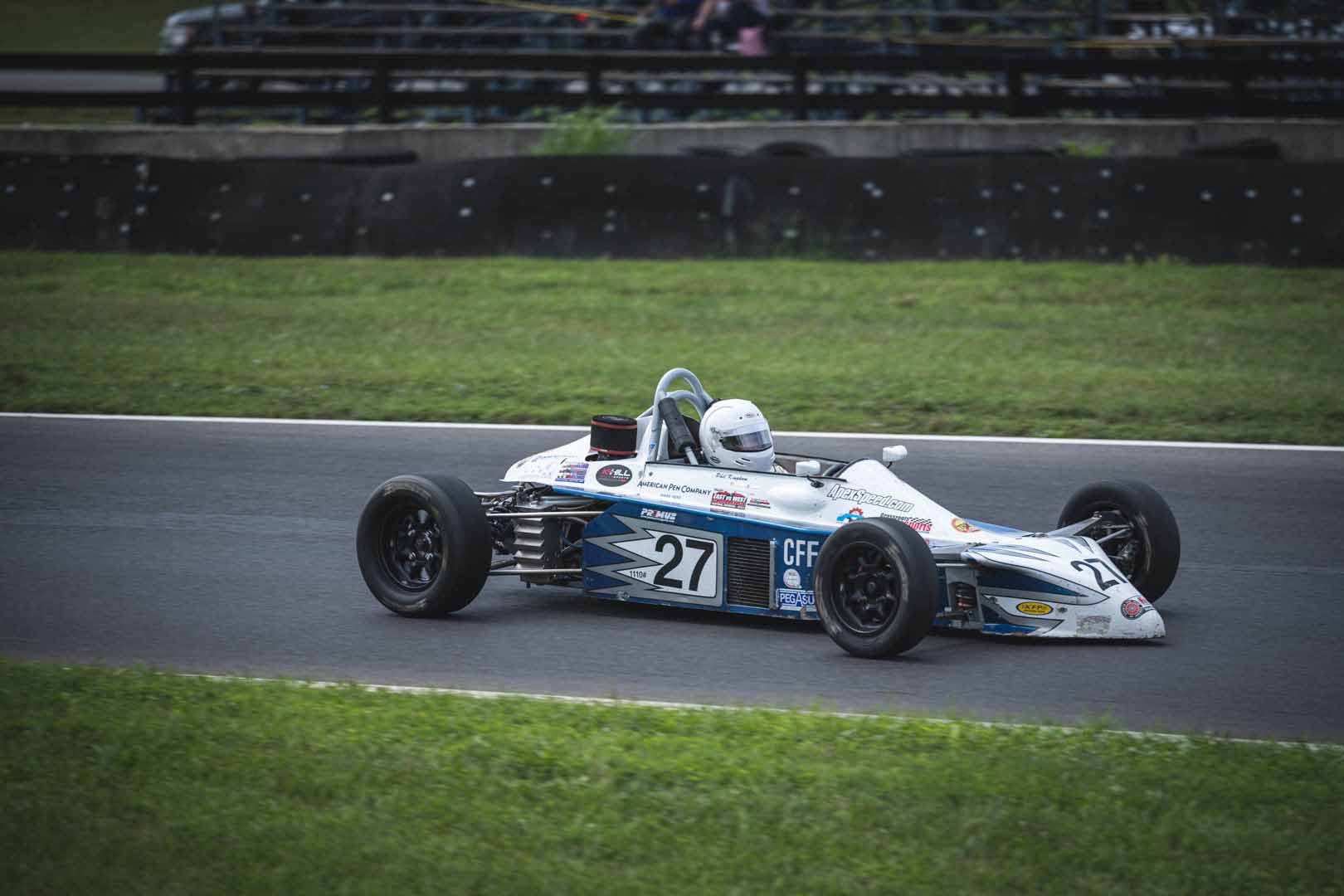 As he has on several occasions in 2020 and 2021 when the Right Coast Formula Ford Series competed alongside the FRP program, Phil Kingham was the man to beat in qualifying one. Taking the pole position by .277 over Derek Holmes with a laptime of 1:19.544, Kingham would begin the first wheel-to-wheel action of the weekend from the inside of the front row. Holmes lined up alongside in second as row two was occupied by Greg Peluso and Wayne Nicolette as Brain Farrell and Michael Rand slotted into row three.

Kingham capitalized from his pole position starting spot to drive to the win in the first RCFFS race of the weekend as he held Wayne Nicolette at bay through the fifteen-lap event. Derek Holmes was able to join Kingham and Nicolette on the podium in third ahead of Greg Peluso and Michael Rand in fourth and fifth.

It was Wayne Nicolette who was able to dispose of Kingham in the second RCFFS event of the weekend with an impressive drive scoring the fastest lap of the race and his first victory of the weekend. Kingham held his own in second and added another podium result while Greg Peluso finished third. Derek Holmes added a fourth-place finish as he finished just ahead of Chip Van Slyke in the fifth position.

Kingham returned to the top of the results sheet in race three as he and Nicolette swapped the top two finishing positions from race two. Kingham scored the win with Nicolette and Greg Peluso in second and third, joining him on the podium. Mark Walthew drove his #22 entry a solid fourth place result as he finished just ahead of the fifth-place runner of William Maisey. 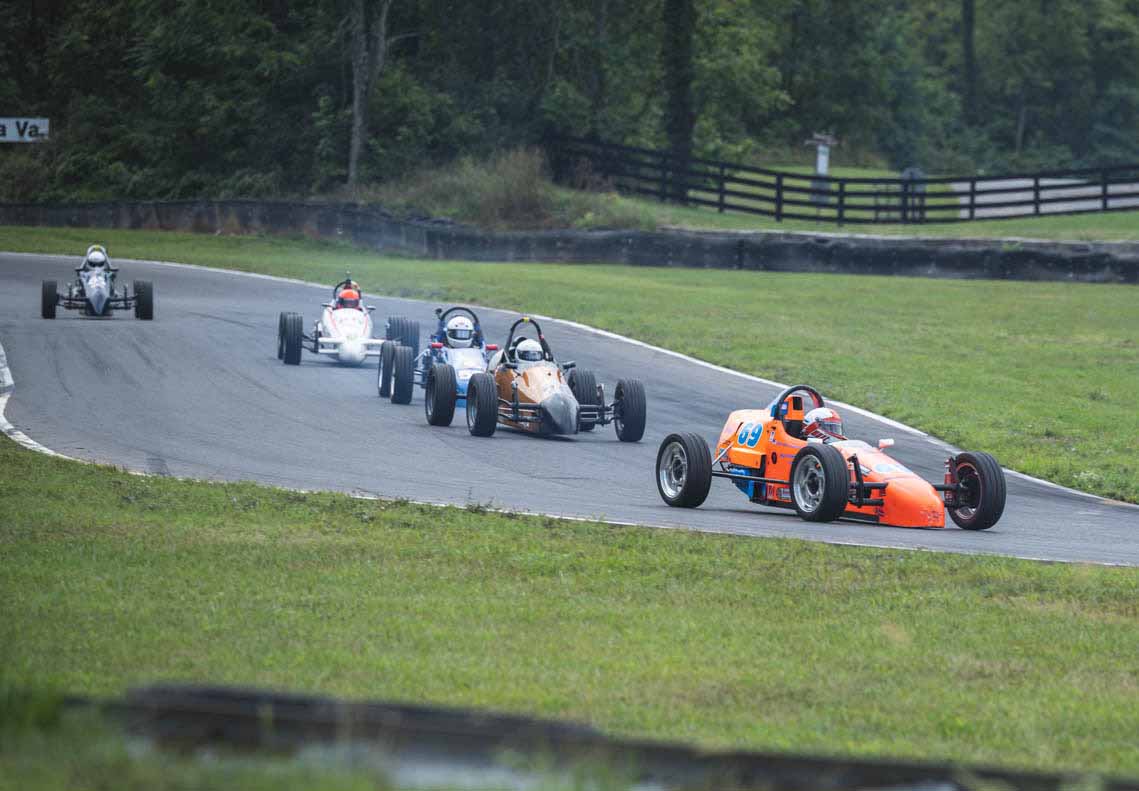 In the 29-car strong Challenge Cup program it was Sam Ryan who led the way in Friday’s qualifying session setting a blistering pace of 1:27.896 to earn the pole position. Dean Curtis was the best of the rest in second, .266 in arrears as Trevor Carmody bested Raymond Carmody for third while Sherman Engler rounded out the top-five.

Ryan made it two-for-two on pole positions securing the inside front row starting spot for race two ahead of Raymond Carmody and Dean Curtis, who were second and third respectively. Sherman Engler improved his race one qualifying result to jump up to fourth as Chris Elwell rounded out the top-five.

Sam Ryan was able to go on to take the first race win of the weekend en route to the fastest lap of the race, taking the checkered flag after thirteen laps. Raymond Carmody was able to advance forward two positions to finish second ahead of front row qualifier Dean Curtis. Trevor Carmody put two Carmodys in the top-five with a fourth pace result ahead of Sherman Engler.

Raymond Carmody broke through in the second RCFFS race of the weekend to climb to the top of the running order and score the victory. Race one victor Sam Ryan would cross the line in second as the top two drivers swapped finishing results from the first wheel-to-wheel action of the weekend. Sherman Engler earned a solid podium result with a third-place finish while Dermot Ennis and Tim Sager finished fourth and fifth respectively.

The Formula Race Promotions program will now have a short three-week break before their next event at the Autobahn Country Club in Joliet, Illinois over the September 10-12 weekend. Stay tuned for all the news and information regarding the event and find details about the event on the FRP website at racefrp.com.