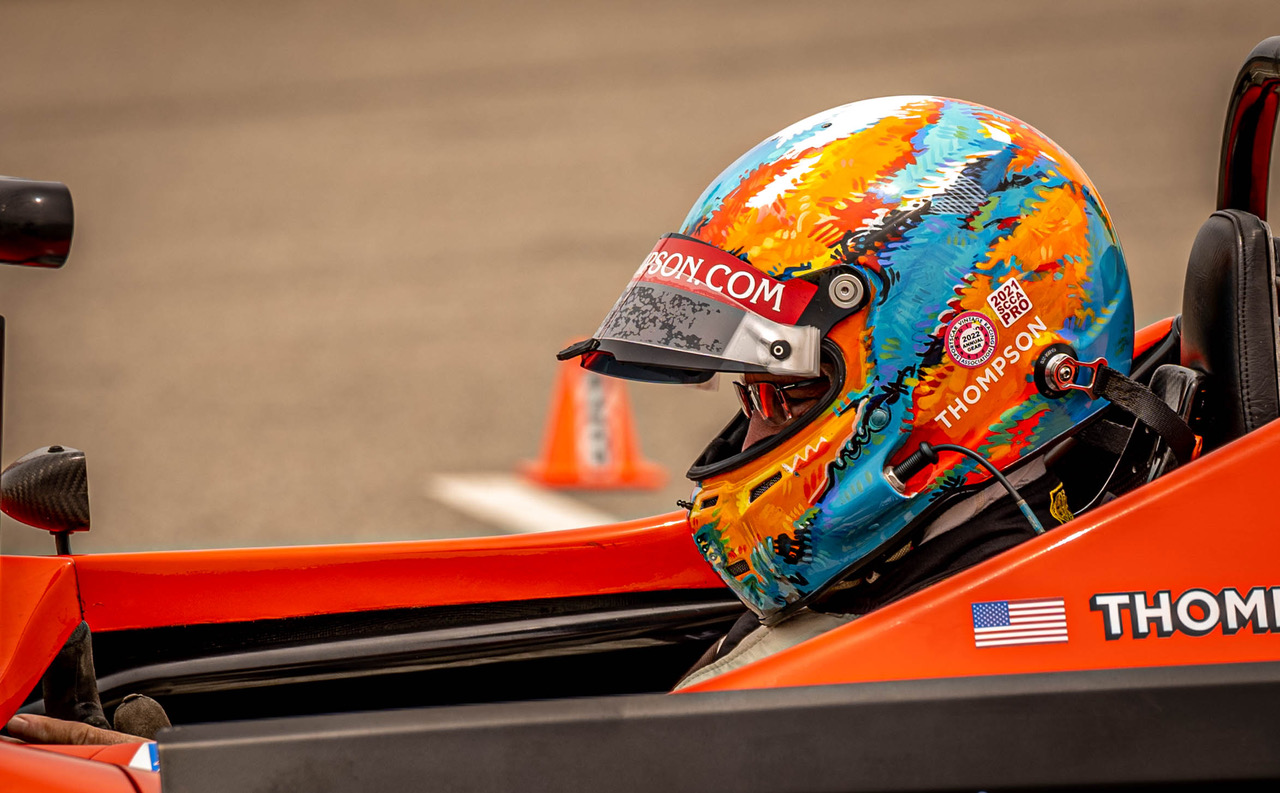 “Pitt Race was a busy weekend for FRP”

It was a jam-packed weekend of racing at the Pittsburgh International Race Complex as the Formula Race Promotions (FRP) program crossed the halfway point. With nine classes in seven run groups in competition, entry numbers breached 110 as the national level program continued to strengthen its position in North American motorsports.

“Another great weekend for FRP, our teams, and our competitors,” explained Series Owner Robert Wright. “The racing was once again phenomenal in very mixed weather conditions and was one of our busiest weekends of racing in the series history with seven run groups all under the FRP banner. Congrats to all our race winners, podium finishers as well as our friends, families, supporters, competitors, and race teams for the continued ongoing support and push to always be better.” 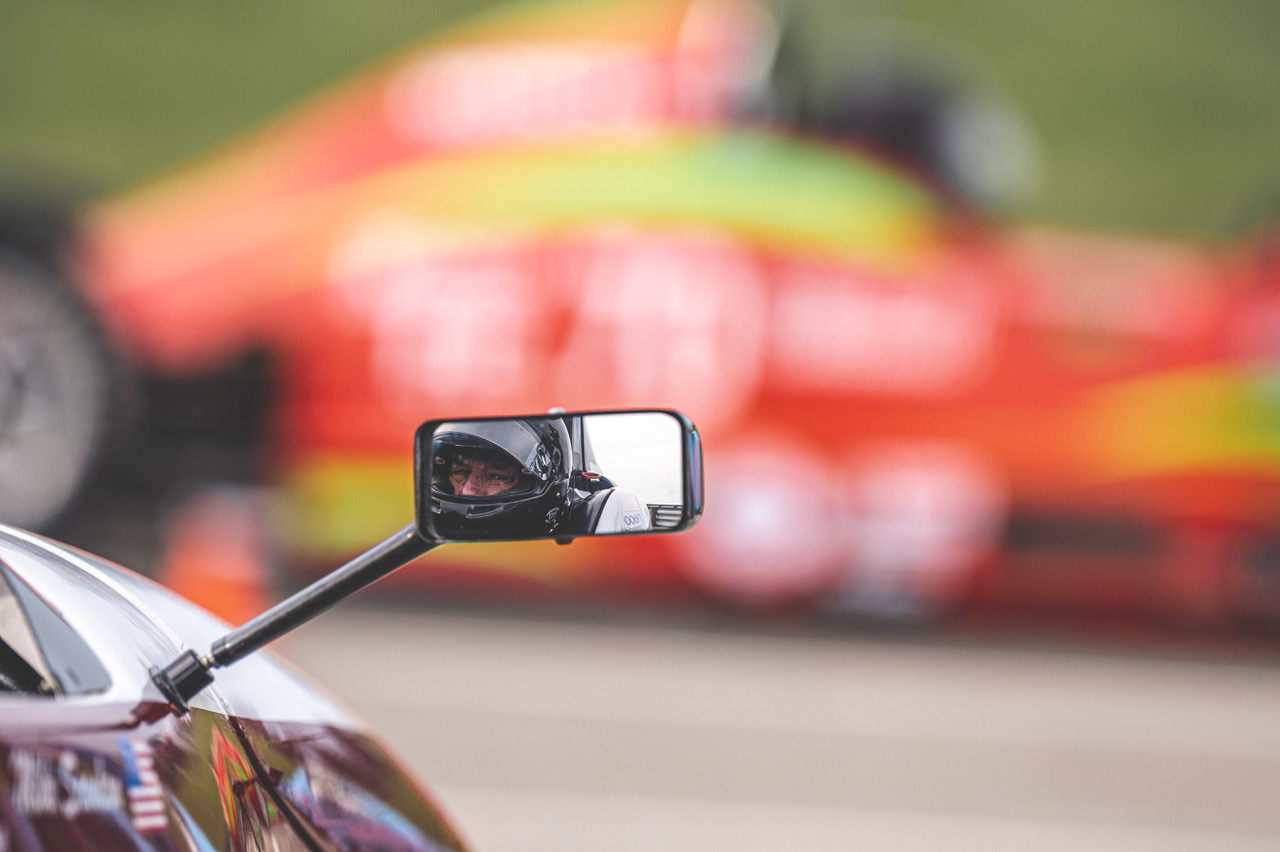 Gernert would start on the pole position for the second VS2000 race of the weekend but would fail to take the green flag opening the door for John Thompson to rise to the top. Thompson scored the race win as Nate Scigliano improved from his fourth-place finish in race one to improve to the second step of the podium in race two. Simon Green was on the podium in third ahead of Jim Hanna in fourth and Robert Dusek II in fifth.

Thompson turned his round three pole position into a race win claiming the checkered flag late on Sunday. Scigliano was able to earn the second step on the podium with Roger Cassin in the third position.

Dan Pyanowski was the man of the hour in the first wheel-to-wheel Formula Ford race of the weekend as he was able to advance four positions to take the checkered flag. Having only the third quickest lap of the race, Pyanowski was at the top of the charts after the ten-lap event. Wayne Nicolette was able to hold onto his second-place starting position to finish second while pole position winner Phil Kingham fell to third on the results sheets. Chris Fahan started outside the top-five but managed to work his way forward to finish fourth while Gary Gecelter was fifth.

Phil Kingham returned to the top step of the podium during the second race of the weekend as he dominated the 12-lap race. Wayne Nicolette was the best of the rest in second as Michael Rand rebounded from Saturday’s result to finish third. Dan Pyanowski backed up his Saturday victory with another top-five finish on Sunday crossing the stripe in fourth with Steve Roux in fifth.

Kingham remained in charge in the third and final race of the weekend scoring the victory, his second of the weekend, ahead of Nicolette and Steve Roux in third. Pyanowski was once again in the fourth position, just ahead of Brian Farrell in fifth. 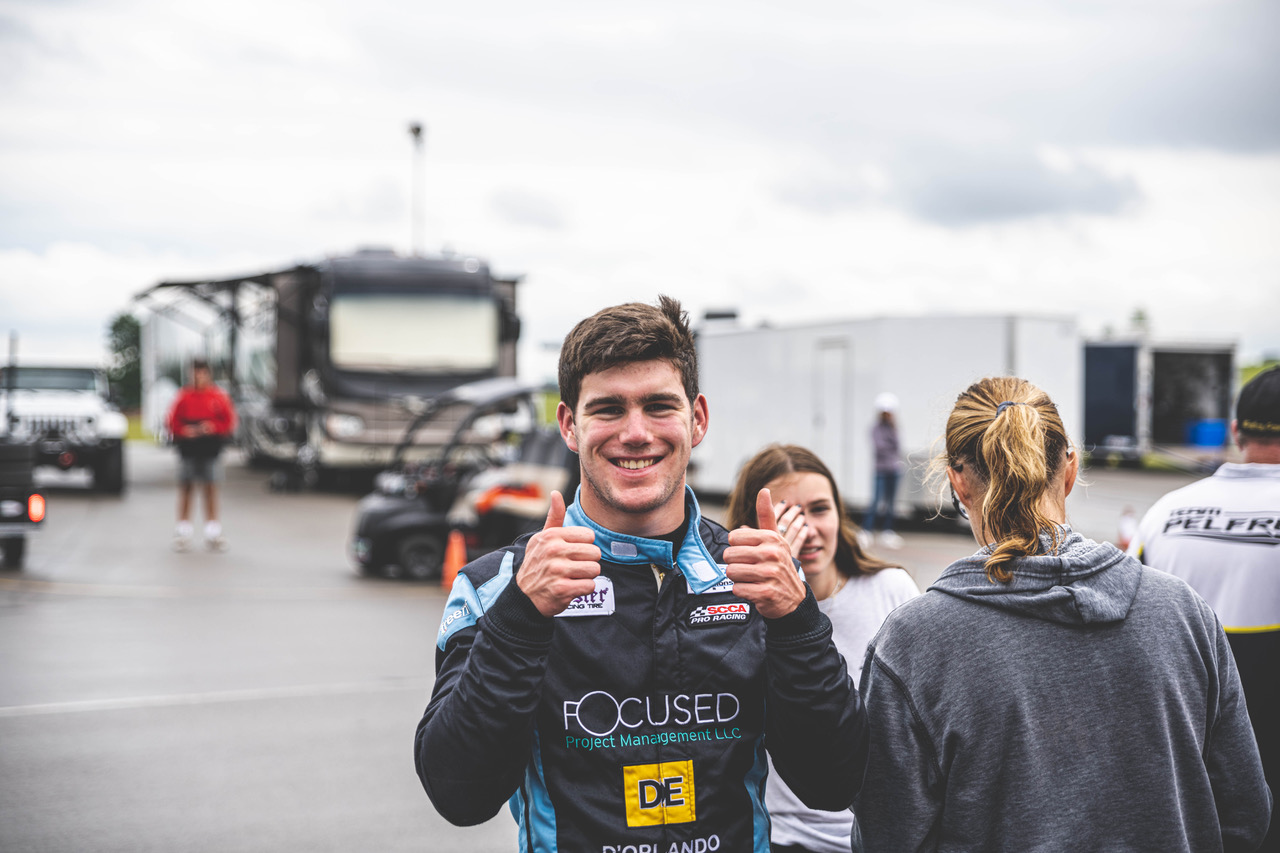 Nicholas d’Orlando charged forward from his outside front row starting position to add to his F1600 race win total this season as Team Pelfrey made it a one-two finish with Hugh Esterson in second. Ax Kametches, who qualified outside the top-five, methodically worked his way forward to stand on the podium in third with pole position winner Thomas Schrage falling three to cross the line in fourth. Finishing fifth on track but leading the F1600 Masters class was Joe Colassacco with Scott Rubenzer and Bob Reid securing the top three positions in the elder class respectively.  That was the short answer to race one.  The weather played a major part in the finish order as teams struggled with the decision to start on wet or dry tires due to intermittent rain, compounded by a forty-minute delay due to oil cleanup from a previous session.  The field actually ran the pace lap, then were brought in when it became clear there was oil mixed with wet in one of the corners.  As a result, the tires could not be changed during the forty-minute halt without losing track position.  Once the race started, it was clean and green in very slippery conditions.

Unlike Saturday, Sunday was hot and sunny with a decidedly better track than Saturday.  d’Orlando would start his quest for a second race win from the pole position in race two but it was Joey Brienza and Exclusive Autosport that was able to be on the top step of the podium. Brienza scored the race win ahead of Jonathan Lee and Ax Kametches. Thomas Schrage maintained is fourth-place result from race one in race two as TJ Zimmerman found his way to the top-five in fifth as d’Orlando ended up 26th after an incident on lap eleven.

Nicholas d’Orlando resumed his winning ways in a shortened race three on the weekend outpacing Thomas Schrage to the checkered flag. Hugh Esterson put two Team Pelfrey drivers in the top-three finishing third as Will Holtz had a solid final race of the weekend to come home fourth. Jonathon Lee continued to make his presence felt adding a fifth-place finish to his results resume. Scott Rubenzer was the top F1600 Masters driver beating out Joe Colassacco and Tom Schweitz.  The field spent four laps under yellow mid-race for the cleanup of Joey Brienza’s car which went into the tire wall in turn four resulting in a green-white-checker finish. 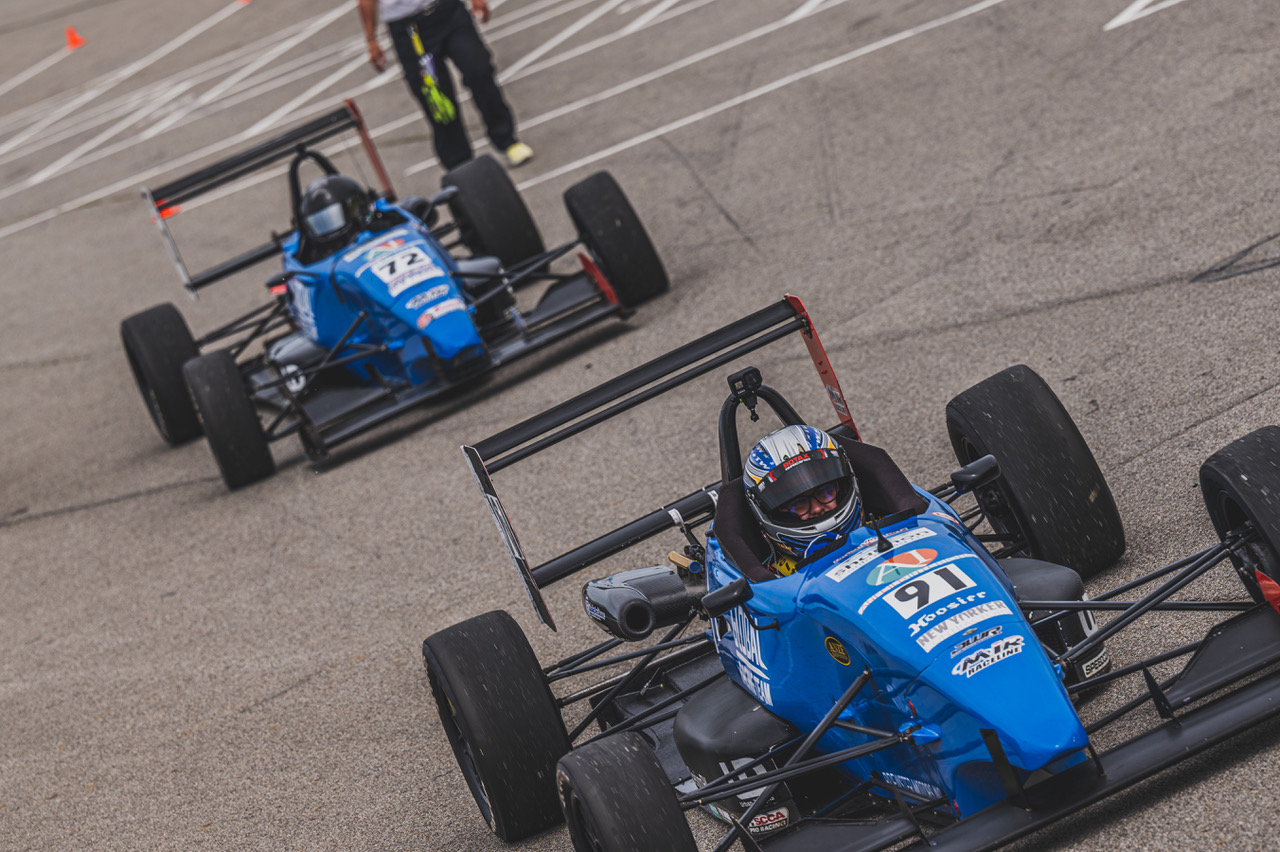 The same situation with weather dogged the F2000 race as the F1600s.  Teams struggled to decide whether to choose wet or dry tires. Trent Walko started on the pole position on dry tires while Austin Hill in second chose wets; the pair swapped finishing positions on the race one results sheet with Hill taking a convincing win. Walko would drive a sterling race on a wet track on drys to hang on for the second step of the podium ahead of Dexter Czuba, also on drys in third and Hartley MacDonald on wets in fourth. Nathan Byrd, joining F2000 for the first time while also still running in F1000, rounded out the top-five on dry tires. Greg Peluso won the F2C class over Mike Pepitone.  In very tricky conditions and low visibility, the race went clean and green.

The first F1000 race of the weekend saw Nicho Vardis rise to the occasion and take the first F1000 checkered flag of the weekend. Taking the win in the seventeen-lap race, Vardis outpaced Reilly Harris for the top step of the podium as Tim Pierce rounded out the podium in third. Pole position winner Alex Mayer dropped from his inside front row starting position to finish fourth as Shane Prieto rounded out the top-five in fifth.

Nathan Byrd returned to the track Sunday with a vengeance as he climbed to the top of the running order and secured the pole position in F1000 qualifying. Multi-time race winner Alex Mayer was able to earn the P2 position with Shane Prieto in third.

It wasn’t until the second race of the weekend for reigning champion Alex Mayer to find his way to the top step of the podium, and he did so disposing of Byrd who crossed the line in the second position. Pierce was able to maintain his position in the top-five with a third-place podium result, just ahead of Stephen Hamilton and Nicho Vardis. 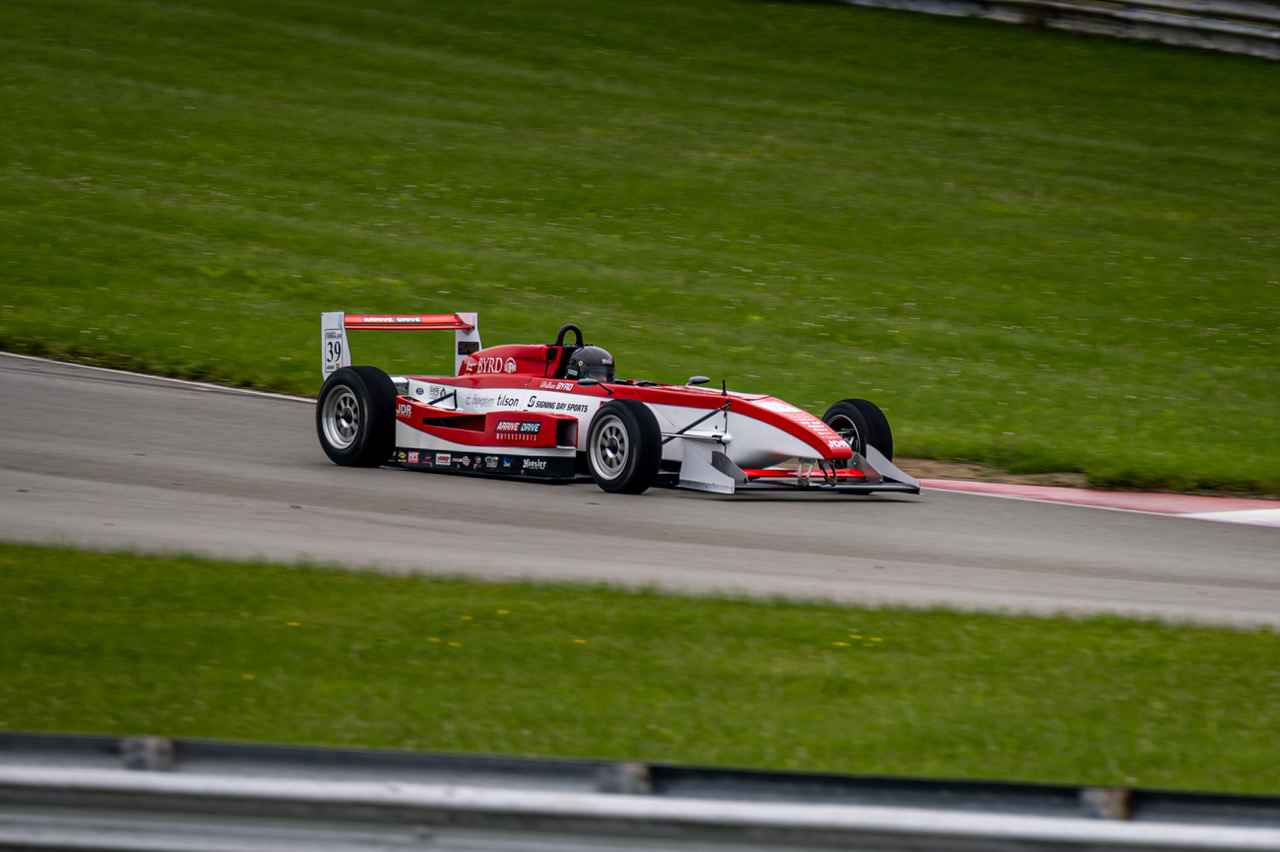 The top two positions in the Formula Vee class would remain unchanged from qualifying to the end of the first wheel-to-wheel racing as Dean Curtis converted his pole position effort into a race win. Sam Ryan was the best of the rest in second despite scoring the fastest lap of the race while Sherman Engler advanced from fifth to third to stand on the podium. Tim Sager maintained his fourth-place qualifying effort to come home fourth while Trevor Carmody rounded out the top-five.

Sam Ryan started on the inside of the front row for race two, but it was Dena Curtis who would rise to the top before the final checkered flag flew. Though he was not the quickest driver on the track, Curtis took home the win over the Carmody duo of Trevor and Raymond who finished second and third respectively. Ryan was able to salvage a fourth-place result as he was able to stay just ahead of Tim Sager in fifth.

Doug Seim gained three positions in the Formula First race on Saturday, rocketing his way to the point to earn the first win of the weekend. Robert Clark gained one position to cross the line in second with George Podgorski falling one to third but salvaged a spot on the podium. Pole position winner Ed Womer was able to slot himself into the fourth position when the checkered flag flew with Logan Miller earning himself a fifth-place result after qualifying fifth earlier in the day.

Ed Womer was able to take his #68 entry from the pole position to victory lane during race two of the weekend in the Formula First division as well as went on to score the fastest lap of the race. Logan Miller battled hard for the second position on the track as Robert Clark rounded out the podium in P3. James Monaghan had a strong showing to finish fourth on track with Preston Taylor in the fifth position.

The Formula Race Promotions program will now enjoy a six-week break before their next event at Road America taking place over the July 30 to August 1 weekend. Stay tuned for all the news and information regarding the event and find details about the event on the FRP website at racefrp.com. 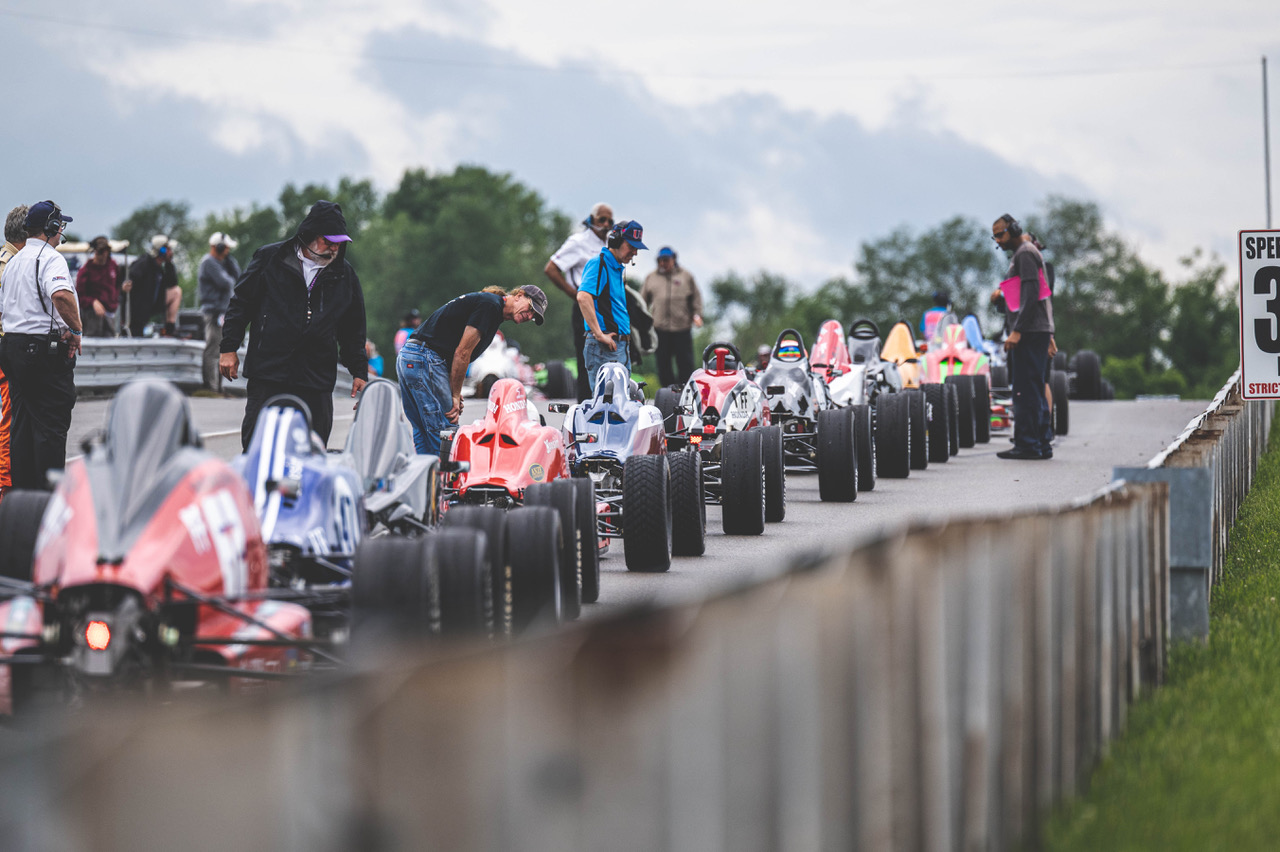